Promoter Lou DiBella says his fighter heavyweight prospect & two-time Olympian Bakhodir Jalolov (12-0, 12 KOs) will return to the ring in May or June against a top 10 contender.

DiBella wants the 6’7″ Jalolov to fight twice in 2023. It’s vital that DiBella start moving the 2020 Olympic gold medalist Jalolov along because he’s been arguably matching him against fighters that you usually don’t see a guy with his pedigree facing after four years in the pro ranks.

The 28-year-old Jalolov has recent knockout wins in 2022 against journeyman Curtis Harper, Kamil Sokołowski, and Jack Mulowayi. Jalolov can be matched against a top-five contender, not just a bottom-ten guy.

“I want to get [Bakhodir] Jalolov into the ring in May or June against a top 10 heavyweight. I think he’s ready for that. I want to give him a pop-up with a couple of fights next year,” said promoter Lou DiBella to Secondsout.

These would be ideal options for Jalolov’s two fights in 2023:

Top Rank promoter Bob Arum likely won’t let Jalolov anywhere near Jared Anderson because he’s trying to develop him into a world champion, and he’s not going to feed him to the two-time Olympian. Jared gets hit too much and is too wide open to fighting a skilled guy like Jalolov.

Likewise, Matchroom Boxing promoter Eddie Hearn will protect the fading 35-year-old Dillian Whyte because he’s pretty shot at this point, and he’s saving him as a guy to feed to Anthony Joshua.

“By mid-year, I want him against a top 10 guy,” DiBella said about the two-time Olympian Jalolov. “I’m excited for next year. Maybe this is a combination of taking a shot at 2022 in boxing, which deserves a shot, and really believing optimistically that people are understanding that we can’t continue this way. 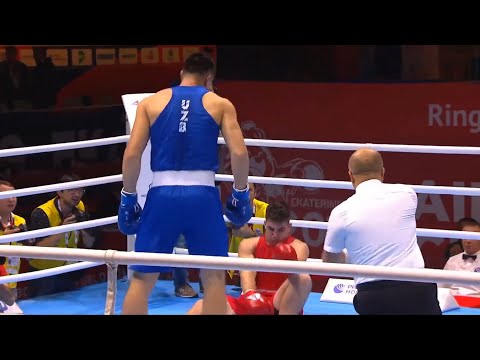 The way Jalolov breezed through his opposition in the 2020 Olympics en route to winning a gold medal, he’s capable of fighting the top five guys right now. DiBella shouldn’t hold him back because he can beat the best now.

Filip Hrgovic or Michael Hunter would be excellent options for Jalolov to fight in 2023 if DiBella can set those fights up.