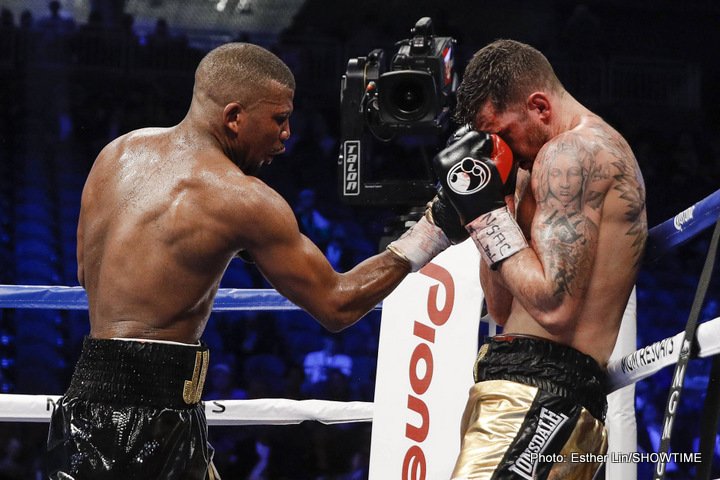 Sweden’s Badou Jack made quite a statement last night on the big Mayweather-McGregor card in Las Vegas. Now a two-weight ruler, Jack ripped the WBA light-heavyweight title from a possibly weight drained Nathan Cleverly. Stopping a busted up Cleverly in the 5th round, Jack proved he had what it took to be able to move up from 168 (where he also held a world title).

Cleverly’s possible weight issues aside, nothing can be taken away from the Las Vegas-based fighter’s brilliant performance. Some good judges had this fight down as a pretty close one; instead Jack simply tore into the defending champion from Wales and never let up.

Jack, backed by The Money Team, now wants the big, big fights; the big money fights. The new WBA ruler wasted no time in calling out just which fighter in particular he wants next:

“I want Adonis Stevenson, let’s get it on,” a victorious Jack said. “Unless he wants a trilogy with Andrzej Fonfara.”

Jack was of course being sarcastic with regards to Fonfara – the man Stevenson had a tough time with in fight-one, a decision win that saw him get put down, and an easy blow-out KO win in fight-two – and he, like many other people, is critical of “Superman’s” quality of opposition. That said, with his brutal punching power, Stevenson against Jack could make for a great fight.

Jack, 22-1-2(13) has also recently stated how he would “love” to fight 175 pound number-one and pound-for-pound top dog Andre Ward. The light-heavyweight division has a major new addition, certainly.

As for Cleverly, who fell to 30-4(16) in losing for the fourth time and was halted for the second time, it could be a very hard road back. “Clev” has managed to bounce back from losses to Sergey Kovalev and Tony Bellew, but the manner in which he seemed so depleted and so vulnerable last night suggests to many that he may not have too much left in the tank.

Cleverly has tried his hand as a cruiserweight and that move didn’t prove overly successful, so if he is struggling to make 175 there seems to be nowhere for him to go.