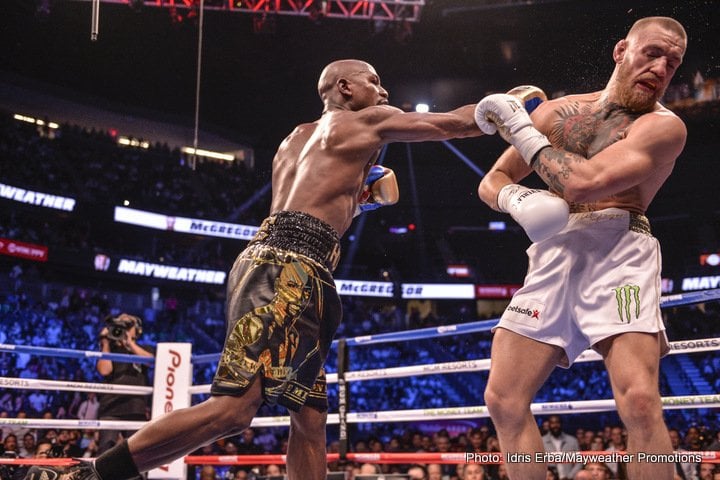 The former pound-for-pound best fighter in the world Floyd “Money” Mayweather, Jr. defeated two-division UFC champion Conor “Notorious” McGregor via a tenth-round technical knockout, as he unleashed a powerful barrage of hard punches that badly staggered McGregor and had him close to being knocked out, which forced referee Robert Byrd to stop this junior middleweight fight at one minute, five seconds. All three judges: Dave Moretti (87-83), Burt Clements (89-82), and Guido Cavalleri (89-81) scored the bout in favor of Mayweather, at the time of the stoppage.

Mayweather improved his undefeated record to 50-0, 27 KOs and broke the mark for the longest winning streak by an undefeated fighter, which had previously belonged to the late Rocky Marciano (49-0, 43 KOs), a heavyweight titleholder in the nineteen-fifties. He also scored his first knockout victory since his somewhat controversial fourth-round stoppage win over Victor Ortiz in September, 2011. It was only his third knockout victory in his last twelve bouts.

McGregor who made his professional boxing debut dropped to 0-1; (21-3, 18 KOs in the UFC) however, he made a lasting impression on the boxing world with his extremely impressive performance, which was much better than anyone expected. Despite never fighting as a professional boxer, let alone as an amateur, he fought one of the best fighters in the last twenty-five-years, who had never lost a fight and rarely loses a round, yet won the first three rounds and fought several competitive rounds until he ran out of gas in the last two rounds.

This bout was televised on Showtime pay-per-view from the T-Mobile Arena in Las Vegas, Nevada and was broadcasted in approximately two hundred countries. The Mayweather vs. McGregor matchup has the distinct possibility of becoming the most watched boxing pay-per-view of all-time, breaking the record of over four and half million buys that was set in May, 2015 from the Mayweather vs. Manny Pacquiao fight.

McGregor won the first three-rounds. He was the more active fighter and pressed the action against Mayweather, who surprisingly did not land more than ten punches in these early rounds, despite being the vastly superior boxer. McGregor connected on a hard left uppercut on Mayweather in the first-round. McGregor fought well for most of the fight, especially in the early going and prevented Mayweather from getting into any kind of offensive rhythm with an effective jab, constantly switching fighting stances, and awkward punches.

After the fourth-round, Mayweather increased his offensive output as he took over the fight. He connected on more combinations and landed the harder punches, as he pressed the action. Mayweather snapped McGregor’s head back in the seventh-round from a hard right jab. Despite Mayweather being more aggressive, McGregor still fought well and continued to repeatedly connect on jabs to the head and body and left hooks against the usually elusive Mayweather. Most of Mayweather’s opponents land less than hundred punches per fight, yet McGregor connected on 111.  Pacquiao only landed 81 punches.

Mayweather dominated the ninth and tenth round as landed numerous hard shots at McGregor who started to fade badly as he was too tired to throw punches, let alone keep his hands up to defend himself. This was understandable considering that McGregor’s longest professional bout was fifteen minutes or the equivalent of five-rounds, which happened just once. Mayweather meanwhile is use to regularly fighting twelve-round bouts and never appears to be tired in the ring. McGregor showed enormous heart and a very strong chin, as he has in the UFC, by somehow not going down in the last two rounds, despite being hit by numerous powerful flush shots.

He connected on a straight right jab that hurt McGregor in the tenth and landed twenty of twenty-six power punches, after which referee Byrd did the correct thing and stopped the bout to prevent McGregor for incurring any more unnecessary punishment, although McGregor wanted the fight to continue.

According to CompuBox, Mayweather landed 170 out of 320 punches for 53 per cent, while McGregor connected 111 out of 430 shots for 26 per cent. McGregor out landed Mayweather 51 to 40 through the first five rounds, but after that Mayweather connected on more punches than McGregor 130 to 60.

It was extremely surprising at how well McGregor performed and how long this entertaining and somewhat competitive fight went because many boxing experts believed, and rightfully so, that this fight would be a brutal one-sided bout that would end with an early Mayweather knockout. Mayweather’s uneven performance might have had to do with the fact that he was rusty going into this bout because this was his first fight in almost two years since he defeated Andre Berto in September, 2015 via a twelve-round unanimous decision. This was the longest layoff of his twenty-one-year career. It might also be because at forty-years-old, father time has finally caught up to him which he denied, although this was not his best performance. His punches were not fast, they did not have the same power on them as they usually do, and he got hit with a lot more shots than he is use to, although he was also fighting a lot more aggressively than he usually does. Mayweather offered another explanation in his post-fight interviews as to why the bout went so long which was this was his plan along to let McGregor tire himself out by being aggressive early on and then knock him out in the later rounds.

Both fighters received a significant amount of money from this bout. It is reported that McGregor will obtain at least seventy-five million dollars, which is five times as much money as he has ever received in any UFC bout. Mayweather will make one hundred million dollars, but this amount can grow up to four times that if the fight hits all of his monetary metrics.

Mayweather indicated after the fight and numerous times leading up to this bout that he will once again retire; however, he has a tenacity to say that, only to return to the ring for another massive payday. He announced his retirement twice before: after the Oscar De La Hoya and Andre Berto fight, yet continued to fight after both of those bouts, so it would not be entirely surprising to see him fight again.

If this is indeed his last bout, and most boxing experts think it is, especially since there is nothing left for him to accomplish, then what a historic Hall of Fame career it has been for him. Mayweather was a five-division, twelve-time world champion, and a lineal title holder in four of the five weight classes he fought in. He defeated twenty-three world champions, (which represented almost half of his opponents) a boxing record. Some of his victories included Hall of Famer Oscar De La Hoya, and potential Hall of Fame inductees: Ricky Hatton, Juan Manuel Marquez, Shane Mosley, Miguel Cotto, Canelo Alvarez, and Pacquiao. According to CompuBox, he holds boxing’s best plus/minus rating at 24.5 (landed 43.4 per cent of his punches, while his opponents connected on 18.9 per cent of their shots).

McGregor said after the bout that he is interested in boxing again, as well as going back to defend his title in the octagon. Dana White, the president of the UFC stated that McGregor will be back in the octagon before the end of the year. We will have to wait and see which sport McGregor chooses to fight in next, which in all likelihood will happen at some point next year, but after tonight’s impressive performance, there are many boxing fans who would be happy to see him in the ring again.