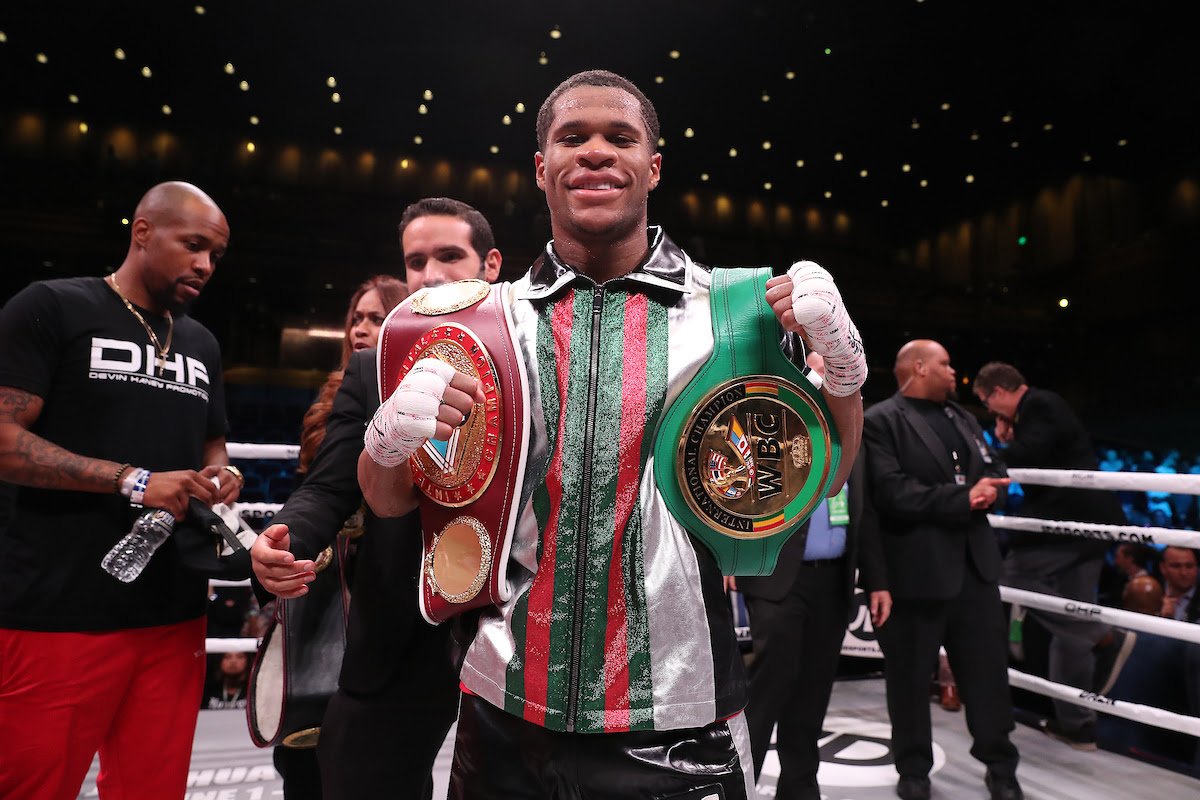 Unbeaten #2 WBC lightweight contender Devin Haney (22-0, 14 KOs) isn’t being considered by Top Rank promoter Bob Arum as a future opponent for WBA/WBA/WBC lightweight champion Vasily Lomachenko (14-1, 10 KOs) to defend his titles against. Arum says Lomachenko will move down to super featherweight after he unifies at 135. He says Shakur Stevenson, who he promotes, would be a tougher fight for Lomachenko than Haney.  Whether that’s so or not is unknown. Most fans would argue that Haney would have given Lomachenko a lot more problems than Luke Campbell.

After his win over Luke Campbell (20-3, 16 KOs) last Saturday night, Lomachehnko needs an opponent for his next fight in December, according to Arum. However, he says the 20-year-old Haney isn’t being considered.

Is Lomachenko missing out on Haney fight due to politics?

Devin is not even in consideration to fight Lomachenko in 2020, says Arum. He wants Haney to pick up more experience, and prove himself before he would make a fight between them. Some boxing fans believe Haney is a better fighter than Campbell, and everyone else at 135 other than Lomachenko. As lost as Campbell looked against Lomachenko,  Haney would have been a better option.

“No,” said Arum to secondsout when asked if Lomachenko will fight Haney in 2020. “Devin Haney is a good fighter, but he is completely inexperienced at this time. He needs to earn his way up by beating some quality lightweights in order not to make a farce of it when he fights Lomachenko. His next fight, the big fight, will be for the IBF title against the winner of Commey-Lopez,” said Arum.

Lomachenko vs. Haney would likely be a bigger fight than a Loma facing the Commey-Lopez winner. Those guys are pretty flawed. Teofimo looked woefully bad in his last fight against Masayoshi Nakatani. As far as Commey, he’s already been beaten twice by Robert Easter Jr. and Denis Shafikov.

What’s unknown is if Arum is against letting Haney fight Lomachenko due to him being promoted by Eddie Hearn of Matchroom Boxing. Hearn said this week that Lomachenko won’t have a choice soon about whether to fight Haney or not. Haney is fighting Zaur Abdullaev (11-0, 7 KOs) in a World Boxing Council 135-pound title eliminator on September 13 on DAZN at Madison Square Garden in New York. If Haney wins that fight, then he’ll be the mandatory for Lomachenko’s WBC belt. Loma is expected to vacate all his lightweight titles if/when he beats the winner of the Richard Commey vs. Teofimo Lopez fight in March of 2020.

Lomachenko will move back down to 130, and look to fight these guys:

That is as competitive a fight as we can make for Lomachenko,” said Arum about him looking to match Lomachenko against the winner of the Commey vs. Lopez fight “At that particular point, we’ll look around and see if there are any other lightweights left to make good fights with him, and if there isn’t, we’ll go back down to 130, and fight guys like [Miguel] Berchelt, [Oscar] Valdez, and the fighting Marine [Jamel] Herring, Floyd’s kid [Gervonta] Davis, and maybe [Tevin] Farmer. Although I don’t think Farmer would, but again, maybe Farmer. And if necessary, maybe we’ll go down to 126. A big fight for him, which would be a lot more competitive, than Devin Haney, is Shakur Stevenson, who I think in those weight category, as the best talent around,” said Arum.