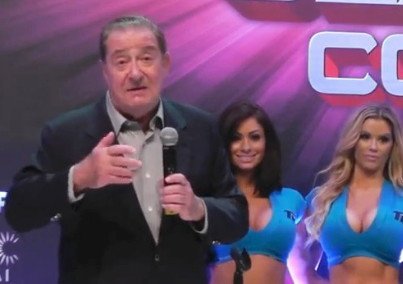 Manny Pacquiao’s long time promoter and Floyd Mayweather’s friend, (only joking about the last part) Bob Arum, has spoken to Sky Sports ahead of Saturday’s super fight to offer his thoughts on Floyd’s recent statements about being better that Ali and Ray Robinson and his fighter’s chance’s.

The Top Rank chief, who has been at the helm of the organisation for almost 50 years said of Mayweather’s recent claims;

“Floyd Mayweather is an excellent, excellent fighter. He’s a great technician but to compare himself to Muhammad Ali, or Ray Robinson or Ray Leonard is a joke.”

“Floyd has megalomania, he believes that because of his accomplishments he rules everything he surveys, he can do what he pleases. I think he realises now there is a caveat – without breaking the law.”

In the interview, Arum goes on to reference the one divide that has split fans more than any other. Who they WANT to win. Not who they think will;

“I think the overwhelming support of the American people is with Manny Pacquiao. Because of the kind of person he is. I think American’s really respect a religious man, a god-fearing man who really truly believes in those principles”

And Arum didn’t stop there in praise of the fighter he has promoted since 2006. Of the result come fight night, he said;

“I am supremely confident that Manny Pacquiao will not only beat Mayweather, but beat him up an may very well knock him out”

“I’m that confident in the ability of Manny Pacquiao to win this fight.”

One thing is for certain. The world will be watching. Including the entire nation of the Phillipines.

When their man fights the country grinds to a halt, the crime rate goes down and anti-government rebels lay down their arms.

READ:
Manuel Charr Aims To Defeat Trevor Bryan, Then Fight In The UK And Be “The Next Prince Naseem”

Manny Pacquiao is a man who fights with the weight of an entire nation on his shoulders. And he has a good portion of the rest of the world rooting for him on Saturday too.

The wait is almost over.