Matchroom promoter Eddie Hearn is adamant that Anthony Joshua won’t be signing the contract to fight Tyson Fury by this Monday.

Fury has recently told fans in interviews that Joshua (24-3, 22 KOs) has until this Monday to sign the contract for their December 3rd fight. If he hasn’t signed it by then, Fury warns that he’ll move on.

Hearn believes that Fury is likely bluffing and just talking about actually meaning what he says. But if Fury is serious, Hearn isn’t worried about it because he suspects that the fight that Tyson wanted all along is against Manuel Charr.

Fury vs. Charr will bring in peanuts compared to the type of money Tyson can get fighting Joshua. On the flip side, there’s a lot less risk for Fury, and he wouldn’t have to work hard in training camp to prepare for the 37-year-old Charr.

“It’s completely conflicted because the conversations with Queensbury are decent and moving in the right direction, but there’s a long way to go,” said Eddie Hearn to Boxing Social on the negotiations between Anthony Joshua and Tyson Fury.

“So Tyson Fury wants to fight Manuel Charr. It’s pretty obvious, and the public isn’t the brightest if they think otherwise, in all honesty.

“I think there is absolutely no way the contract gets signed on Monday because it’s still a long way to be done. We’re moving in the right direction, we’re having meetings, and this fight takes time.

“We waited nine days to get the contract. So all of a sudden, he wants it signed in 24 hours. No chance. Let him do what he’s going to do.

“If he really wants the fight, he’ll let the process unfold, and we’ll sign the contract when it’s in the right place, and we’re all working productively to get it there.

“Yes, because when he comes out with statements like that,” said Hearn when asked if he’s leaning in the direction of the Fury-Joshua fight not happening on December 3rd.

“We’ll see. Once again, Tyson Fury has made a statement. ‘I’m retired, I’m this, I’m giving my purse to the homeless, I’m doing all this. I’m walking away from this fight on Monday.’

“Guess what? The fight ain’t getting signed on Monday. So if you want to walk away from this fight while we’re all trying to make the fight, including your promotional team, then off you go,” said Hearn. 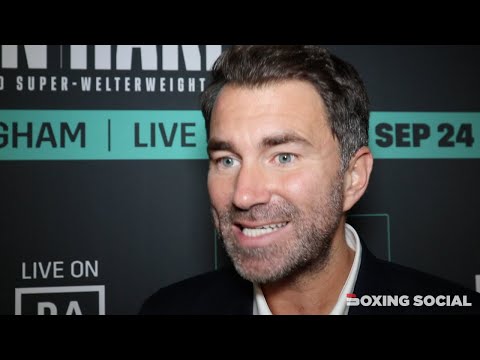