Anthony Joshua says Tyson Fury will come out of retirement “100%” to fight him. Joshua feels that Fury is “bored” and doesn’t know what to do with his life after his recent retirement. Hence, we’ve seen him buying an expensive Ferrari & a dog to try and liven up his life.

What Joshua isn’t saying is whether Fury (32-0-1, 23 KOs) will come out of retirement to fight unified heavyweight champion Oleksandr Usyk (19-0, 13 KOs) if he’s victorious on Saturday night.

There’s a belief that many boxing fans have that Fury believes Usyk is all wrong for him due to his mobility, defensive skills and the awkward style that he possesses.

The problems that Fury had in his fight against former cruiserweight Steve Cunningham would be magnified in a fight against Usyk, who could take advantage of Tyson’s lack of mobility & his slow hand speed.

Earlier in Fury’s career, he was an excellent mover, but in recent years, he’s turned into a huge 270+ lb mauler who wins fights by leaning on his opponents and clubbing them with shots.

“I think he’s not full of his life after boxing. I think he’s pretty bored. End up getting a dog, a Ferrari. He’s got to keep himself busy. There’s not much else to do. He gets a dog now. I think he will come out of retirement soon.

Anthony Joshua poking fun at Tyson Fury's retirement on a media call ahead of his rematch with Oleksandr Usyk… pic.twitter.com/vfWs7QPBDM

“It’s a difficult question. Ask me this on Sunday morning. Probably, yes,” said Usyk’s promoter Alex Krassyuk to iFL TV when asked if the addition of trainer Robert Garcia to Anthony Joshua’s team would benefit him in the fight.

“But whether it’s something positive or negative, it’s hard to know. It’s definitely something new because Garcia is going to bring some new fresh ideas into the strategy

“He probably says some new things, some new behavior. Joshua used to mention ‘killing instinct.’ Maybe that is the glue? We don’t know. We will see. Do you know what I mean?

“Most likely, it won’t go 12 round distance. I tell you why because first, it’s too hot here in Saudi, and second, both guys are so focused on finishing each other. It shouldn’t last 12,” said Krassyuk. 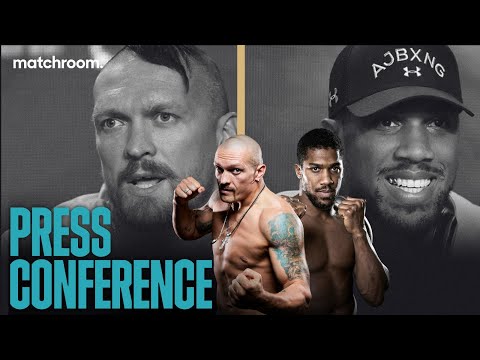