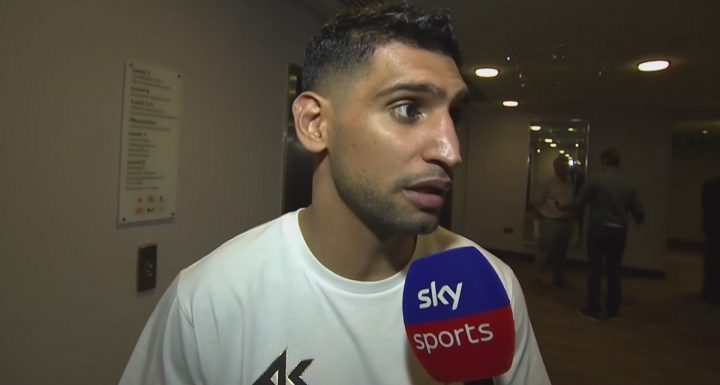 Top Rank has offered Amir Khan $5 million for him to fight WBO welterweight champion Terence Crawford on March 23 on ESPN PPV at Madison Square Garden in New York. The fight is being negotiated, and it’s unclear if it’ll take place or not. Khan’s promoter Eddie Hearn was counting on him facing Kell Brook after he wins his fight this Saturday against Michael Zerafa. Khan vs. Brook would make a lot of money for both fighters. However, Khan wants to fight pound-for-pound fighter Crawford for his World boxing Organization welterweight title.

Some boxing fans might be interested in paying to see Crawford fight Khan on ESPN PPV, but there would be a lot more than wouldn’t be agreeable to paying to see the fight. Khan isn’t a PPV fighter in the United States, and neither is Crawford. If it’s an inexpensive card for the boxing public to purchase, then it might do good numbers, but it would likely need to be quite low in cost to attract fans. Khan has only fought twice since being knocked out in the 6th round by Saul Canelo Alvarez in 2016. Khan was out of the ring for an entire year after his loss to Canelo. Since Khan has come back, he’s beaten journeyman Phil Lo Greco and fringe contender Samuel Vargas. Khan looked poor against Vargas. It’s a risky fight for Khan to fight Crawford given how shaky he looked in his last fight against Samuel Vargas last September. Khan was knocked down and hurt by Vargas in the 2nd round of that fight. Vargas is not known for being a puncher.

If Khan faces Crawford and gets knocked out by him, he could ruin the interest in a fight between him and Brook. Some for the British boxing fans will still be willing to watch Khan and Brook face each other, but it would be seen more of a celebrity match between two faded fighters rather than a fight involving top guys from their respective divisions.

“There have been discussions with Team Khan as well as an offer made and hopefully the fight can be put together,” Top Rank vice president Carl Moretti said to ESPN.com.

“We made a proposal to Amir Khan and we will wait to hear back,” Top Rank boss Bob Arum said to ESPN.com. “I would love to do the fight.”

It’s a baffling move on Khan’s part for him to suddenly be showing interest in fighting Crawford. There are some fights that make sense for a fighter like Khan. For example, a fight against Brook or Manny Pacquiao, but not against Brook. That doesn’t make any sense. That’s a bad move all around for Khan. Even with Khan getting $5 million, it’s still a bad idea, because it’s not a good style match-up for him, and he risks losing a far bigger payday against Brook.

Kell Brook likely won’t be happy at hearing the news of Khan suddenly going in the direction of a fight against Crawford. Brook was counting on facing Khan in March on Sky Box office. The two fighters were in negotiations and were stuck on the rehydration clause that Khan wanted for the fight. It’s a 10-lb rehydration clause that would limit both fighter’s weight to 157 lbs on the morning of the fight. That wouldn’t be a big deal for Khan, who is about that size when he enters the ring for his welterweight fights, but it would be a brutal requirement for Brook. He rehydrates a lot more than that for his welterweight fights.

“Fighting for a pound-for-pound title would be amazing,” Khan said to the Dailymail.co.uk. “To win it would be even better, so I think I’m in a position where I can get that fight with the pound-for-pound champion at the moment. The Brook fight is always going to be there.

READ:
Wladimir Klitschko: Wilder vs. Fury = 50-50 fight
Read: Tyson Fury Still Getting Praise For The Amazing Way He Got Back Up In That 12th-Round
Read: Brandon Robinson takes on undefeated Kalvin Henderson on December 7
Follow @boxingnews24