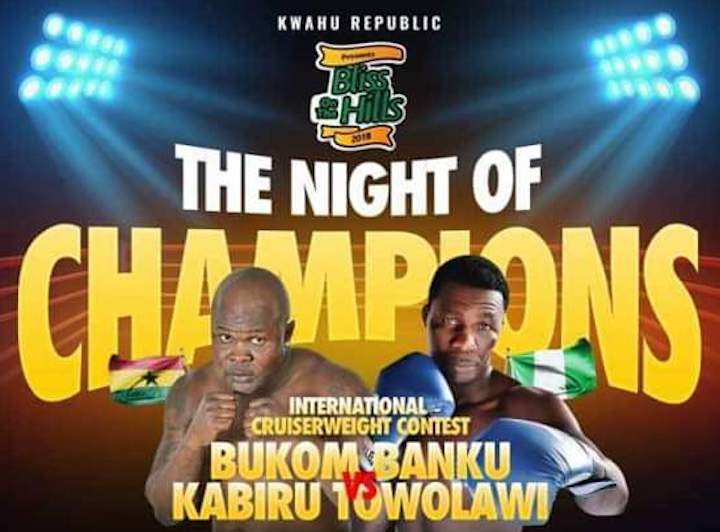 Enigmatic Ghanaian boxer, Braimah Kamoko, better known by his nickname Bukom Banku will make a return to the ring for only the second time this year when he squares up to Kabiru ‘Storm’ Towolawi of Nigeria in the main event of the final Azumah Nelson Fight Night of the year on Boxing Day, December 26.

Kamoko (30-1, 23 KOs) will test his credentials for a return to the top against Towolawi (9-1, 7 KOs) in an international cruiserweight contest scheduled for 10 rounds on the special Azumah Nelson Fight Night billed for Kwahu Abetifi in the Eastern Region of Ghana as part of Kwahu Republic’s annual ‘Bliss on the Hill’ Christmas festival, 2018 edition which includes boxing for the first time since the event’s inception in 2016.

The 6-day festivities begin with a gospel show on 25 December before boxing of course bells off on 26 December. Afro-pop music show takes place next day, December 27, sightseeing of various tourist attractions on December 28, followed by reggae and dancehall concert featuring top Ghanaian artistes Shatta Wale and Stonebwoy on December 29 before the curtain is brought down on this year’s programme on December 30.

Another boxer expected to draw a large crowd in Abetifi is Emmanuel Danso alias Kwahu Tyson, the only pro boxer to hail from the Kwahu area where the event takes place will also have the opportunity to fight in front of his own people in a super middleweight contest against Michael ‘Amazing’ Osunla Osuman.

Concluding the 6-fight bill to whet the Christmas appetite of Kwahu people is the welterweight contest between Jacob Laryea and Isaac Tetteh.

“We want to commend the Republic of Kwahu for sustaining this wonderful Christmas event and we are delighted to be part of it. When we got the call that they wanted to add boxing to the festivities this year, we welcomed the idea,” said Yaw Sakyi, CEO of Azumah Nelson Boxing Promotions at Wednesday’s press conference in Accra to launch the programme.

“The Azumah Nelson Fight Night is held twice a year in honour of the legend, Azumah Nelson. We already held the first event in July after his 60th birthday and the second was supposed to be December 15 but because of the importance we attach to this event, we shifted our December 15 event to 26 and to Kwahu. We assure you of good fights by good boxers including Bukom Banku who we know a lot of people will be looking forward to see,” Mr. Sakyi added.

Ten Years Ago: When A Young Canelo Alvarez Scored A One-Punch KO Win Over The Iron-Chinned Carlos Baldomir
Follow @eastsideboxing