Alexander Povetkin is fully recovered from COVID 19 and ready to battle Dillian Whyte on their rescheduled date of March 27th on Gibraltar.

Having the rematch moved to March 27th could potentially help Whyte, as he needs as much time possible to recover from his vicious knockout loss last summer against Alexander.

Also, it helps Whyte that Povetkin will continue to age while he waits for the rematch.

Povetkin (36-2-1, 25 KOs) will be looking to knock out Whyte (27-2, 18 KOs) and regain his WBC mandatory status to eventually fight for a world title against the winner of the two Anthony Joshua vs. Tyson Fury fights.

Povetkin already knocked out Whyte in the fifth round last August at the Matchroom Boxing headquarters, but they’re going to run it back anyway.

Matchroom promoter Eddie Hearn wants Whyte to be the one that eventually faces the Joshua-Fury winner, but that can’t happen if Povetkin keeps him knocking him out.

If Povetkin stops Whyte on March 27th, it’s going to be interesting to see if Hearn can talk the Russian fighter into giving Dillian the third shot.

It’s not as Povetkin will have any great jobs other than to wait around until 2022 before getting his mandated title shot against the winner of the two Joshua vs. Fury fights. 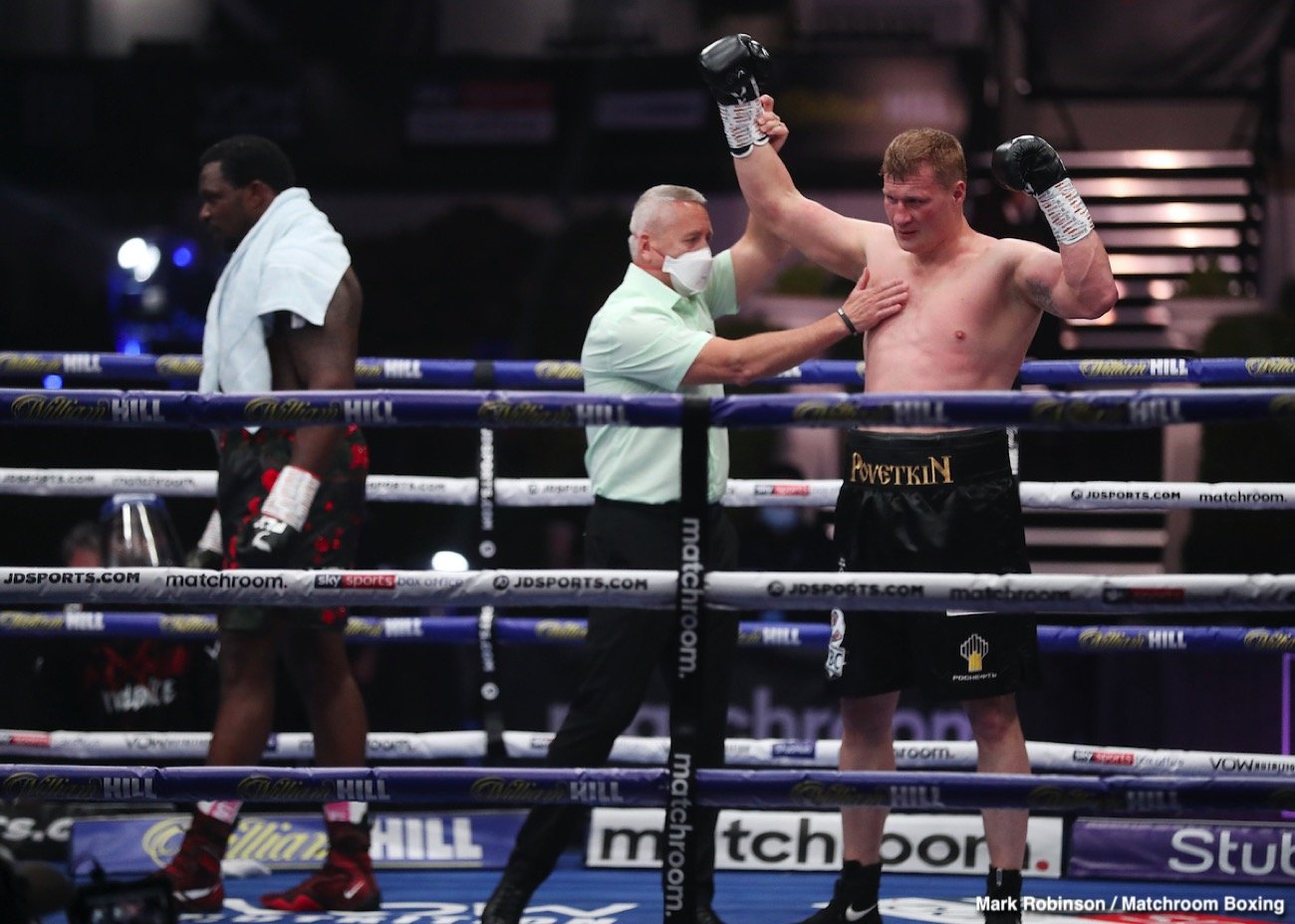 “Anything can happen. I reacted normally. What can you do? We made some changes and go on,” said Povetkin about the fight being pushed back to March 27th.

The real question marks about the Povetkin-Whyte rematch are these items:

Povetkin can’t afford to have his breathing impaired for this rematch, as he could gas out quickly if his stamina isn’t what it was before he came down with the flu recently.

If Whyte hasn’t fully recovered from his knockout last August, he won’t last long against Povetkin.

Taking big power shots from Povetkin for 12 rounds will be hard enough on Whyte as it is, but it’s going to terribly risky for him if he’s no longer able to take punches without nosediving on the canvas for a little snooze.

Time is on Dillian’s side

“I think in Dillian’s case, it helps because that was a bad knockout, and he’s going into an immediate rematch,” said Spencer Oliver to iFL TV on Whyte’s rematch with Povetkin on March 27th. 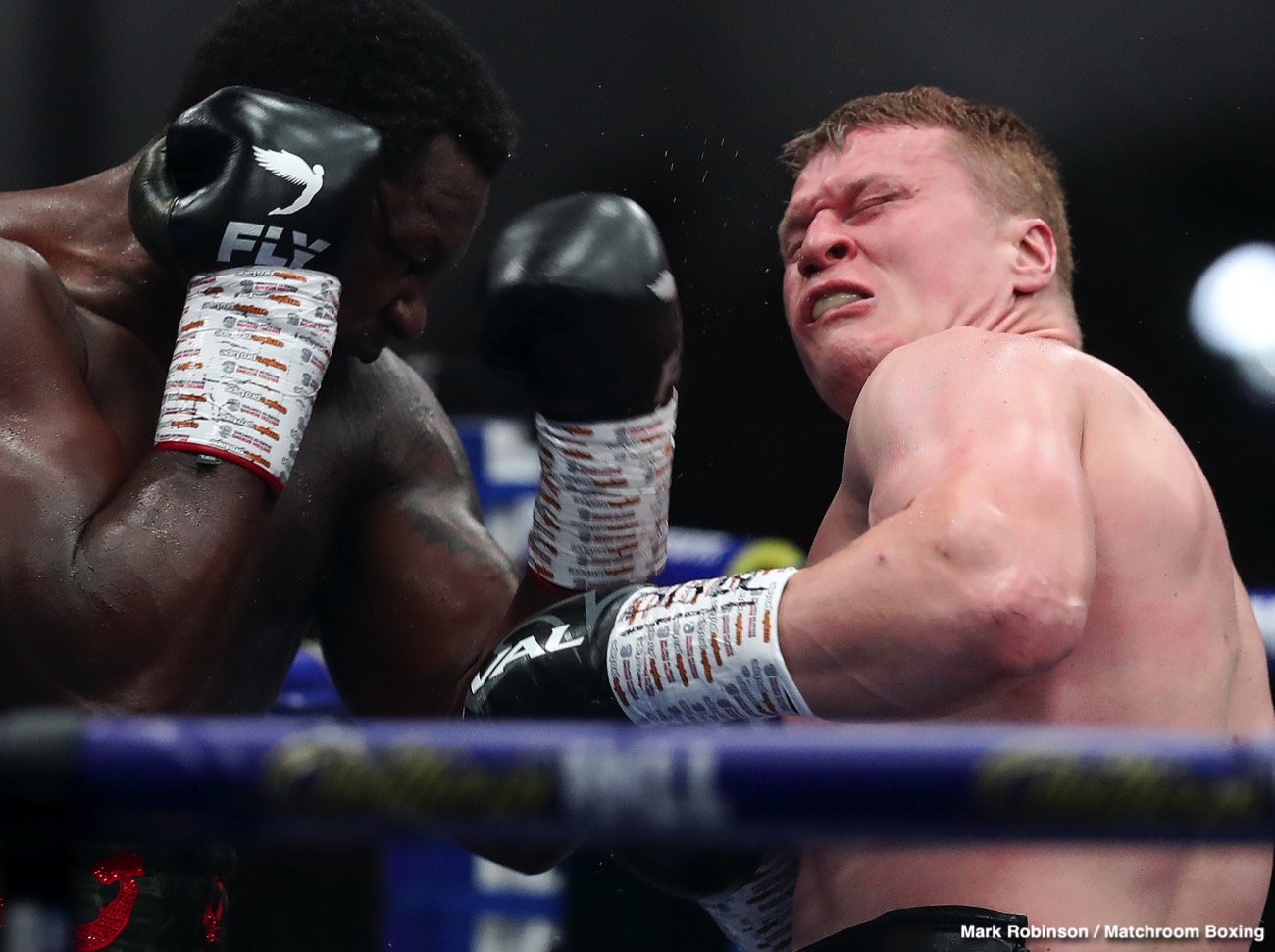 “He’s still going to have demons in his head. The last thing Dillian remembers is getting whacked with that uppercut. So I think the time is only going to work in Dillian’s favor.

“Hopefully, they’ll get some crowd in there that will benefit Dillian as well. He didn’t like the fact that he was boxing in this eerie sort of atmosphere, so I think it’s going to work in his favor,” Oliver said.

If Whyte doesn’t have demons in his head from the first fight, he’s crazy because he’s got to have some concerns after the way he was knocked out.

That wasn’t the first time that Whyte has had problems taking a big uppercut.

Whyte was badly hurt by Joseph Parker and Oscar Rivas from the same uppercut, and he was fortunate not to be knocked out in either of those fights.

Those guys aren’t great finishers like Povetkin. Assuming Whyte gets hurt again, he’s going to be in a world of trouble on March 27th with Povetkin bearing down on him.

“It’s a risky fight, it really is,” said Oliver about Dillian taking a major risk fighting Povetkin so soon. “Every month that goes past, Povetkin isn’t getting any younger.”

Whyte is gambling, and so is his promoter Eddie Hearn in taking the immediate rematch with Povetkin rather than waiting longer and fighting other guys.

The natural inclination for a fighter like Whyte to experience after a loss like his is to try and get back to where you were before that loss.

Whyte was in a great position going into the match with Povetkin last August, as he was the WBC mandatory challenger, and Hearn was talking about possibly forcing a title shot for him in early 2021 against WBC champion Tyson Fury.

Sadly, the knockout loss Whyte suffered wrecked those plans, making it necessary for him to run it back again. I mean, Whyte could have walked away, but that would mean he would have to slowly work his way back into a mandatory position. Who knows how long that would take.

But with Whyte going straight into the rematch with Povetkin allows him the possibility of regaining what he lost in one fight.

“He didn’t show any signs of deterioration in the last one, did he?

“He [Povetkin] recovered from a couple of big knockdowns [in the fourth], and his hand speed was good tactically. He was coming in low looking for those uppercuts, and those are the shots that Dillian is vulnerable to.

He [Dillian] carries his hands up quite wide, and when he comes in when they come close, he goes in square. That’s dangerous against a fighter like Povetkin; he’s got a wealth of experience.

“He’s [Povetkin] an Olympic champion, a former world champion. He knows how to fight. A lot is riding on this for Dillian; it really is.

“A loss here [for Whyte] would spell the end of the top tier, and if that’s the case, it’s going to be difficult to get back up there.

“I’m not saying his career is over, but a loss could be really damaging. So he needs a win; he’s got to get it right.

“So I understand why he’s [Whyte] delayed it. He wants everything right and on his terms. So the fight goes ahead three weeks later in Gibraltar. Let’s hope we can get out there,” said Oliver.

Whyte would still be a first-tier heavyweight after a second defeat against Povetkin, but it would likely knocking him out of the top 10.