Adrien Broner hinted today that he plans on making a push for a world title shot against WBC light welterweight champion Regis Prograis if he successfully defeats Hank Lundy (31-12-1, 14 KOs) on February 25th.

Choosing Prograis (28-1, 24 KOs) to try and win a world title could be a mistake by the former four division world champion Broner because if he can’t beat lesser fighters like Jovanie Santiago without controversy and guys like Adrian Granados, he’s undoubtedly not going to have much of a chance against Prograis.

Broner (34-4-1, 24 KOs) wants to pick up another belt after going through a long seven-year period of him failing to win any titles after he lost his WBA 140-lb belt on the scales against journeyman Ashley Theophane in 2016.

We don’t know what’s left of the 33-year-old Broner because he’ll be coming off a two-year layoff when he faces the 39-year-old Lundy in a 10 round fight in the main event on BLK Prime PPV on February 25th at the Gateway Center Arena, in College Park, Georgia.

Broner looked like a shadow of his former self the last time he was in action in February 2021, winning a controversial 12 round unanimous decision against Jovanie Santiago.

It’s hard to imagine two years of inactivity will have improved Broner, and what’s even more worrisome was the large pot belly that he began training camp with. Broner’s belly made him resemble Santa Claus, and even if he belts that gut off, he’s not going to be the fighter that he was back in his prime twelve years ago. 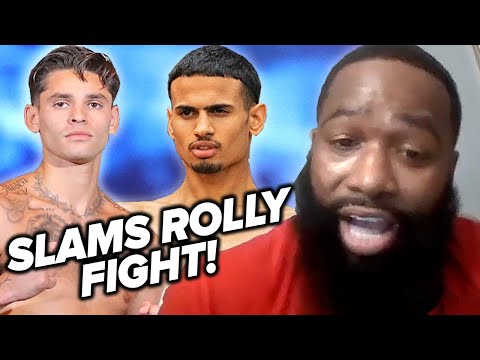 “My main focus is Hank Lundy,” Broner said when asked if he’s going to make a big push for the Prograis fight. “He’s a hell of a fighter, a world class fighter, and a two-time world champion. He can fight his a** off.

“It’s everything to lose with nothing to gain, and I don’t dislike Rolly. I actually like Rolly. He’s a cool dude, but I’m not looking to fight no Rolly at this point in my career. His biggest fight of his career, he got knocked out. Why would I fight him? Ain’t nobody worried about no Rolly,” said Broner.