David Haye believes Anthony Joshua’s career won’t be ruined if he loses to American Jermaine Franklin on April 1st when the two are expected to meet at the O2 Arena in London, England.

Haye states that even though Joshua has lost his last two contests against Oleksandr Usyk, a defeat against Franklin (21-1, 14 KOs), who arguably still should be unbeaten due to his controversial loss to Dillian Whyte last November in London, AJ can absorb another defeat without it destroying his money-making ability and popularity in the UK.

As Haye points out, the old war horse Derek Chisora has thirteen losses, but it hasn’t hurt his career. He’s still making money in his fights in the UK. With that being said, British fans are a lot more forgiving of fighters that lose repeatedly than people from the U.S., who don’t like watching over-the-hill guys.

Where Joshua’s career would be negatively impacted by a loss to Franklin is that he wouldn’t be given a shot at a world title unless is was one of the champions that were only thinking about money and didn’t mind AJ’s defeats.

“It won’t look good. He’ll have three back-to-back losses that he can’t afford,” said David Haye to Pro Boxing Fans about whether Anthony Joshua’s career will be over if he loses to Jermaine Franklin on April 1st. Two

“I remember after the first fight [with Oleksandr Usyk], ‘His career is over if he loses.’ Well, here we are again. Look at Derek Chisora. He’s had thirteen losses, and he’s still churning. So, no, I don’t think it’ll be the end,” Haye continued about Anthony Joshua.

“It might be the end of his world title aspirations, but in terms of packing those arenas, making money, and enjoying the game of boxing, no, I don’t think this is. He should beat Jermaine Franklin. 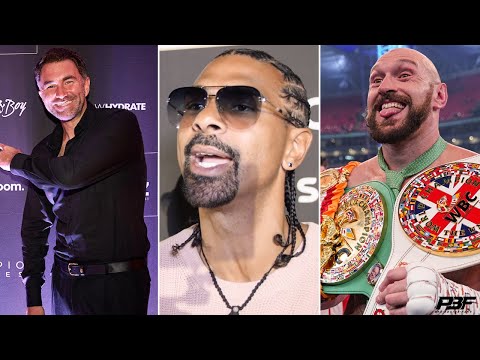 “I thought that was a good fight that he gave Dillian Whyte. That was a very, very good fight. So he showed that he has some skills,” Haye said about the 29-year-old Franklin.

“He [Franklin] showed he has some nice head movement, but if AJ can’t blast him out there in three or four rounds, then he’s doing something wrong. He’s so much bigger & stronger, athletic, and punches so much harder, and he’s an Olympic gold medalist; he’s a European, a former world champion.

“So, he’s got everything in his favor. He just needs to go out there and let his hands go. If he goes out there and tries to have a boxing match with him, he’ll have a hard time because the guys is quite a tricky little boxer,” said Haye about the highly technical Franklin.