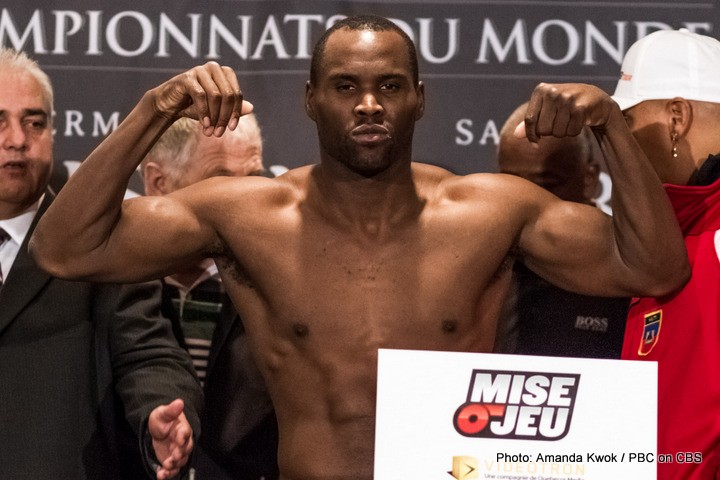 It seems we can pretty much forget about seeing a light-heavyweight unification battle between bitter and vocal rivals Adonis Stevenson and Sergey Kovalev any time soon. These two gigantic punchers should have met by now, at least a few months back, but negotiations, for whatever reason or reasons, have failed and failed.

And now, with “Krusher” Kovalev close to a big fight with the unbeaten and sublime Andre Ward, Stevenson also appears to have a new challenger. In fact, Stevenson, 27-1(22) is likely to face an old adversary in a rematch – one who gave him a very good fight back in May of 2014. According to TVA Sports, which extensively covers the Canadian boxing scene, Stevenson will likely face Polish warrior Andrzej Fonfara in a rematch in either May or June. Reportedly, the May rematch would take place in Montreal, while the June return meeting would take place in Toronto.

Either way, Fonfara, who has been craving and asking for a second shot at southpaw Stevenson ever since their first fight, and who is a proven contender, will no doubt take the fight at either venue. Fonfara, 28-3(16) and coming off that thrilling October points won over a determined Nathan Cleverly (this win following a retirement win over Julio Cesar Chavez Junior) gave Stevenson a real scare just less than two years ago in what was “Superman’s” third defence of the title he won by shocking Chad Dawson inside a single round.

Decked twice in the early going, the lanky Pole looked like he was on his way to becoming another KO victim for Stevenson. But, in showing real heart and a granite chin, Fonfara withstood the storm, recovered and then launched an attack of his own in the final quarter or so of the action fight. Fonfara, the younger man against Stevenson by a decade, scored a knockdown of his own in the 9th-round and pressed the action as the defending champion appeared gassed. Stevenson, who said he hurt his hand in the early going of the rumble, had to dig deep to keep his belt. More than a few fans wondered what would have happened had the fight been scheduled for the old limit of 15-rounds.

But now, with Stevenson having grown a little older (he’ll be 39 in September) and with Fonfara being at his peak arguably and certainly being in fine form with those two big wins, the rematch might appeal to many. Can Fonfara land his own shots earlier this time? Will Stevenson again fade in the later rounds if the fight gets that far? Has Stevenson, who has actually fought weaker opposition than has Fonfara in his last couple of fights, seen his own peak years pass him by?

In terms of motivation, I would suggest Fonfara will have the definite edge going into this fight. Who knows, we could even be on the verge of a trilogy. And nobody would have even thought about suggesting that during the early rounds of the fight that was taking place inside The Bell Centre in Quebec in May of two years ago!