Yesterday, in Japan, there was a unification clash between two of the best fighters in the world. This was a fight that, during these times when the spectacle of the best facing the best has become more of a rarity, restored plenty of the kind of faith some of us have come dangerously close to losing in the great sport of boxing. 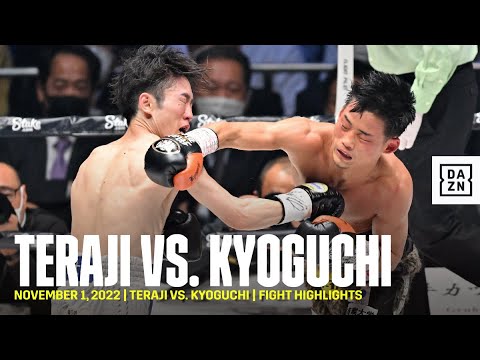 Yesterday, rival light-flyweight kings Kenshiro Teraji and Hiroto Kyoguchi put it all on the line, their two belts (and the Ring Magazine belt) at stake. Going in, there was no trash-talking, no hype-job pushing or shoving, no poor attempts at driving up ticket sales. Instead, there was only fine sportsmanship; the buzz around the fight already there along with the guaranteed receipts.

And the fight delivered. Massively.

During a time when the bigger, in fact the biggest names of the sport posture more than they fight (see Tyson Fury-Anthony Joshua, Terence Crawford-Errol Spence, Ryan Garcia-Gervonta Davis) – these two primed and peaking 108 pounders put it all on the line for our entertainment as much as for their own legacy and financial position. It was as a result refreshing, our belief in our fine sport being rewarded once more.

Again, neither warrior – not Teraji, not Kyoguchi, is a big name (outside of Japan) but they showed the far more egotistical fighters of the world, the bigger stars, how to go about things. Yesterday’s fight was a great one, resulting from a great match-up. It’s just a pity that far fewer people than there should be are talking about it; celebrating it.

But what we got in Japan, between two fighters with a combined record of 35-1 going in, was a fight between two evenly matched rivals who could so easily have taken the option of avoiding one another. In the end, Teraji delivered the performance of his career to stop Kyoguchi inside seven rounds to unify two world titles. But far bigger than that, Teraji and Kyoguchi gave us a fight that reminded us how great boxing really can be when fighters fight.

With no bullshit. With no posturing. With no avoiding the tough fights. With no excuses. The supreme against the supreme.

Our thanks go out to both men from the great country of Japan for giving their sport the shot in the arm it so badly needed at this time.