Heavyweight legend “Smokin’” Joe Frazier should today be celebrating his birthday. Born on this day 78 years ago, Frazier, like his one-time bitter rivals Muhammad Ali and George Foreman, came into the world in the cold month of January.

Only Foreman is still with us – Ali has gone, as have Kenny Norton, Leon Spinks, Jerry Quarry, Jimmy Young, Ernie Terrell, Oscar Bonavena, Buster Mathis, Floyd Patterson, and so many other heavyweight greats who did so much in the 1960s and 1970s.

Frazier always said he would outlive Ali; Joe perhaps never having stopped feeling the pain Ali either intentionally or unintentionally inflicted on him during that four-year period during the division’s golden era.

But say what you want about these two titans (as many people have done and will continue to do) – Frazier and Ali brought out the best in each other and the sport of boxing was forever enriched because of it. Together they gave the heavyweight division two of THE greatest fights anyone will ever witness.

But there is much more to Frazier and his legacy than the Ali fights/rivalry/blood feud (so superbly written about by Mark Kram).

Frazier had the single finest left hook, not only in heavyweight history but perhaps in boxing history regardless of weight class. Also in possession of an engine that never came close to running out of gas, Frazier’s sheer, relentless bob-and-weave, never let his prey take a second of rest defused even as special a fighter as Ali.

Indeed, it was only the tall, powerful, and space-consuming George Foreman that managed to push Joe back, knock him off balance and then blast him with the kind of firepower Frazier was a sitting duck for.

Foreman aside, no man ever truly managed to beat Joe Frazier. That in itself should stand as some amazing tribute; especially when we consider the excellent fighters Frazier fought during his relatively short, 37-fight pro career.

But of course, Joe also had an astonishing amateur career; with him winning Olympic gold in 1964, this after just 40 unpaid bouts. 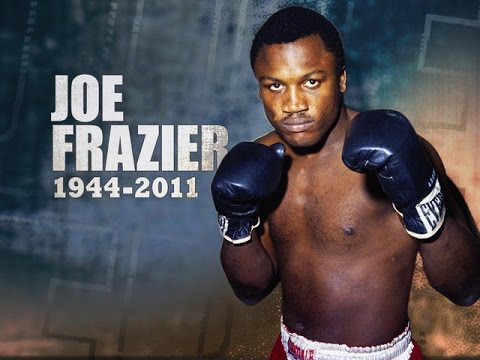 And Frazier gave so much to popular culture (his appearance in ‘Rocky’ is super-special, and not many prime-time heavyweights would have done it, such a low-budget project the film was in 1975).

Mention Ali, and you cannot help but think about Joe, and vice-versa. Utter the phrase ‘Real Life Rocky,’ and you think of Joe (no color barrier there).

Compile a list of the ten greatest heavyweights, and Frazier has to be there. But again, Frazier would be remembered today if he hadn’t fought Ali, if he hadn’t given genesis to the ‘Rocky’ legend.

In fact, that’s an amazing line of thought: If Ali wasn’t around, who would have lived with the lean, mean, primed, and peaking Joe Frazier? No one, most probably.

And through all his triumphs, throughout all his success, Joe remained as humble as can be. Joe might just have been the most down-to-earth, accessible, approachable, and just plain likable heavyweight king of them all.

Here’s wishing the greatest fighter ever to have been associated with the proud fighting city of Philadelphia a posthumous happy birthday.