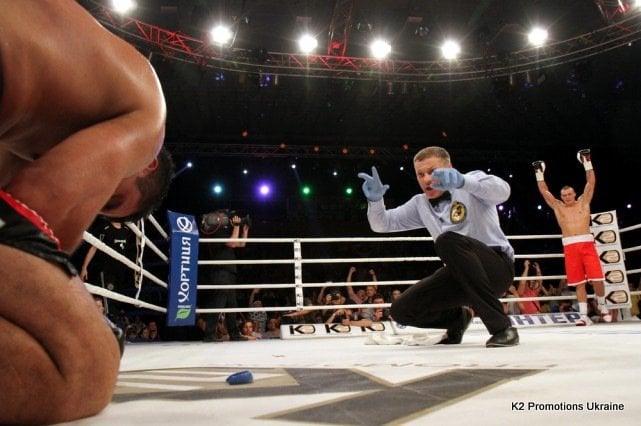 Zlaticanin is a 5ft 4in Eastern European tank that has thus far proven unstoppable.

Last year the Montenegrin signed for Al Haymon. In Zlaticanin’s first fight under Haymon’s management he knocked out the unbeaten and highly rated Ukrainian Ivan Redkach. With only one fight in 2015, “Dynamite” is likely to be stepped up by Haymon this year, especially as he is the number one contender for the WBC title held by Jorge Linares.

Zlaticanin will prove a stern test to Linares or any of the other lightweight champions, with two being follow Europeans, in Englishmen Anthony Crolla and Terry Flanagan. He is a heavy handed pressure fighter with a great engine that fights out of the southpaw stance. Although limited in skill, his world class credentials were shown when he beat former world champion Ricky Burns in 2013, knocking the Scotsman down on the way to a comprehensive win that was given as a split decision in Glasgow.

Fighters with the kind of style that Zlaticanin have don’t usually last long into their 30s. Now, in his prime and under the guidance of Al Haymon, Zlaticanin can definitely become a world champion in 2016.

A 6ft 3in former Olympic and World Amateur Championship heavyweight gold medalist, many are whispering Usyk could be boxing’s next big thing.

Rumours are that all top promotional companies – Top Rank, Golden Boy, Sauerland – were fighting over the signature of Usyk when he turned professional in late 2013. The Klitschko’s brothers K2 Promotions ended up winning the signature of their fellow Ukrainian and he has since become the number one contender for the WBO title in just nine fights.

Usyk is what you would expect of an Eastern European with his kind of amateur pedigree. He has sound fundamentals and an aggressive approach. Usyk’s style thus far has been to work his jab to get opponents to open up, whereupon he unleashes his monstrous left-hand which is a proven fight finisher.

The Cruiserweight division is lined with knockout artists and three of the four current world champions are also Eastern Europeans, meaning there are fights for Usyk fans will want to see and that can viably be made. As such, this year Usyk may just prove that he is as good as many think he could be.

Read:  The Final Pound-For-Pound Rankings Of 2022 – Who Ended The Year As The Man?

2015 was somewhat of a breakout year for Liverpudlian Smith, going from prospect to contender with some good wins and even better performances.

First in June he beat former European champion Christopher Rebrasse. The Frenchman is incredibly tough and has a busy style, always throwing and always trying to win. In this fight Smith took what Rebrasse dished out and fired back with his superior arsenal, putting Rebrasse down on the way to a unanimous decision victory.

Next he took on undefeated knockout artist Rocky Fielding, his fellow Liverpudlian that he had formed a rivalry with. There was a big build up and a lot of eyes on the fight. The occasion brought out the best in Smith, who wiped out Fielding in one brutal round.

In both performances Smith showed he is a level above these solid contenders, proving he is a legitimate threat to any of the champions out there.

At 6ft 3in Smith is a huge super-middleweight and powerful with it. He has shown a great knack for throwing destructive body punches, is always in great condition and has a composed style. Smith has everything it takes to beat any of the current super-middleweight champions, especially since Andre Ward has moved up to light-heavyweight.

Callum – the youngest brother of Liverpool’s famed Smith boxing brothers – is the number one contender for the WBC title, held by Badou Jack. Thus, in 2016 Smith should get the chance to fulfill his potential and become a world champion.

In 2016 Luis Ortiz will be looking for nothing but big fights.

“The Real King Kong” is aided in his attempt to fight the biggest names in the heavyweight division by the fact he has an impressive record, one of boxing’s biggest promotional companies behind him and a real sense of urgency fueled by the fact he is in his late 30s.

Ortiz is currently the WBA “interim” champ. The WBA are notorious for creating confusing situations with their belts because of their insistence on having a super champion (currently held by Tyson Fury after his win against Wladimir Klitschko), a “normal” champion (currently held by Ruslan Chagaev) and an interim champion, even though both the other titles were fought for in the second half of 2015.

Ortiz won this not-so prestigious title firstly in 2014 with an emphatic first round knockout win over undefeated Lateef Kayode. This result was overturned after Ortiz failed a drug test. Credit to Ortiz though, he came back in 2015 and knocked out Matias Vidondo for the same title and then beat American Bryant Jennings by knockout in seven rounds.

Jennings was regarded by most as a certified top five heavyweight after giving Wladimir Klitschko a solid test in a losing effort in 2014. Ortiz used his powerful counter-punching style to put on a really impressive performance against Jennings and then proceeded to call out all the division’s top names.

Ortiz is a typical Cuban fighter. He’s a smart, tricky southpaw with a real sense of how to set up shots. On top of this he has proven knockout power. Of his three fights that he did not win via knockout, two were disqualification victories against opponents that became desperate and attempted foul tactics rather than get knocked out by Ortiz.

With another victory in the same manner as his last two wins, the boxing world may be demanding to see Luis Ortiz fight for a world title in 2016.;

In 2015 Spence had four fights with opposition that shared a combined record of 97-5. The relatively inexperienced American won all four via technical knockout in flawless displays.

Spence is arguably the most feared prospect in boxing today. He is aggressive but efficient, with a nasty inside fighting game, well schooled and very strong. Floyd Mayweather said Spence, his former sparring partner, is ready to fight for a world title right away.

A southpaw with real knockout power, Spence likes to jab his way into range and then use his great ability to find the right punch to break an opponent down, whether it is through body shots, uppercuts or hooks. To the bigger names in his division, Spence presents little reward but huge risk. Yet hardcore boxing fans – and of course Floyd Mayweather – are pushing his cause and Spence has said he is willing to face anyone.

The welterweight division is to lose its two most dominant champions.This year Spence is looking to prove himself the heir apparent.