Heavyweight contender Andrew Golota was never a fighter who had what could in any way be called a poker-face. Indeed, when the Polish big man was hurt in a fight, he showed it; telegraphed it even. And the short and sweet hammering Golota, AKA “The Foul Pole,” was blitzed with on this day a quarter of a century ago gave us one of the most unforgettable facial expressions ever seen in the ring.

Lennox Lewis, approaching his absolute peak and six fights removed from his loss to Oliver McCall, was the WBC heavyweight champ and some people, in fact quite a few, felt he would be given a tough time by Golota. Golota, perhaps a fighter who never really enjoyed a peak period, not in terms of winning fights, anyway, was known for his two crazy battles with Riddick Bowe. Due to his unfathomable desire to keep hitting Bowe low, Golota lost two fights he could have and should have won. Still the craziness aside, Golota had shown ability, power, and a good chin.

Against Lennox, Golota had nothing. He wasn’t allowed to show anything.

Fighting at The Boardwalk in Atlantic City, New Jersey, Lewis and Golota danced for way less than a round. Lewis, who stated after the fight that he had entered the ring “wanting to get rid of all the misfits,” jumped on the notoriously unstable Golota quickly, and soon his big right hand hurt Golota, backing him into a corner. Lewis blazed away, dropping Golota. The dazed Pole got back up, wearing ‘that’ look on his face (some amusing descriptions described Golota as looking like a man who was trying to take down the licence plate of the truck that had just ran him over!)

Lewis was in no mood to let his prey off the hook, and soon, in a veritable flash, Golota was blasted into another corner, where Lewis put the finishing touches to his night’s work. Golota was decked again and it was all over – after just 95 seconds.

“I wanted to get rid of the last of the misfits and this was the last misfit,” a victorious Lewis said.

“There was too much pressure,” a devastated Golota said afterwards. “I was nervous.”

Despite Golota’s shortcomings, this was perhaps one of Lewis’ finest performances, this in a career filled with highlights. 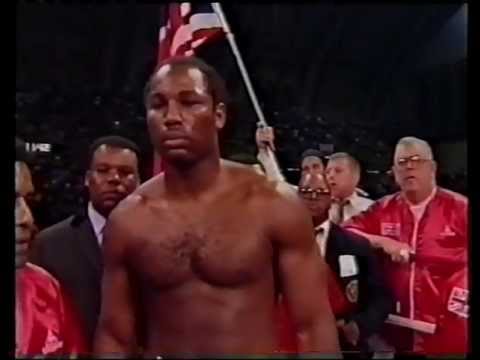