Oscar Valdez laughed on Friday when told that Shakur Stevenson has been calling him out nonstop and saying he’s ducking since his win over WBO super featherweight champion Jamel Herring on October 23rd.

Unfortunately for Shakur, Top Rank promoter Bob Arum has other ideas on who he wants to match against Valdez next, as he wants to have Oscar defend against Emanuel Navarrete.

Arum plans on having Stevenson defend against former WBC 130-lb champion Miguel Berchelt next, and then the winners of those two fights will battle with two belts on the line in the second half of 2022.

Valdez waiting for the contract

“It’s the contract. I’m waiting for the contract to be sent,” said Oscar Valdez to Fight Hub TV when told that Shakur Stevenson has been telling him to stop running.

“He has a promoter, I have a promoter. We’re the same. It should be an easy fight [to put together] to make. Send the contract, let’s not make it difficult. I’m waiting. He has a belt, I have a belt. Let’s make the fight happen,” said Valdez.

Stevenson should know by now that he’s NOT going to get the fight with Valdez next. He would be doing himself and the boxing public a big favor by clamming up already on the idea of him fighting Valdez.

The fight that Shakur needs to be talking about is Berchelt because that’s who Top Rank will be offering him for the first defense of his WBO 130-lb title.

“Ryan [Garcia], I wish him nothing but the best,” said Valdez when told that Canelo Alvarez admonished him for wasting his potential by not staying in the gym.

“Ryan has got a lot of talent, but he needs to be focused on discipline and on his career because he has everything that makes to be a star. He’s battling his own mind game. I wish him nothing but the best,” said Valdez.

Ryan Garcia was dumped on last week by Canelo for him lacking the dedication to stay in the gym. But at this point, it’s hard to see Ryan’s career going anywhere.

He’s made a lot of money in the sport without ever fighting anybody, and it doesn’t look like he’s got the hunger needed for him to take his career to the next level. It’ll be interesting to see how much longer Ryan will continue to train at Eddy Reynoso’s gym before he stops coming altogether.

“I’m excited for Canelo and Plant and for the future,” said Valdez. “Shakur Stevenson just came out of a great fight, and you got [Miguel] Berchelt, who wants a rematch. They’re throwing a lot of fighters in the line, and I’m ready for whoever.

“It’s going to be a great fight, but there are levels,” said Valdez about Saturday’s fight between Canelo and Plant. “I think Canelo is at another level in this fight. I just expect it to be a good fight for both fighters. I’m predicting a knockout through the eighth and the tenth.

“The discipline,” said Valdez when asked what sets Canelo apart from other fighters. “You’ve got hundreds of fighters with talent, but when you mix talent with discipline, it just goes to another level.

“Canelo has that. I bet next week, he’ll be in the gym training again because he’s a gym rat and a very disciplined fighter that people should admire,” said Valdez. 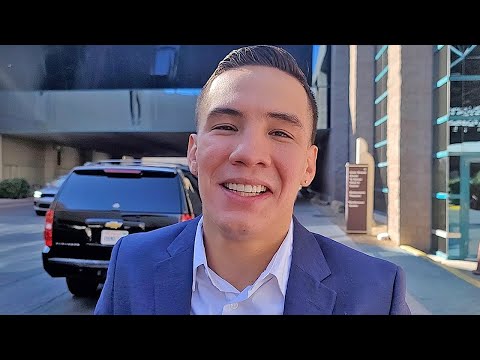