Tyson Fury (31-0-1, 22 KOs) says he’s expecting to hear some excuses coming from Deontay ‘Bronze Bomber’ Wilder (42-2-1, 41 KOs) after stopping him in the 11th round last Saturday night at the T-Mobile Arena in Las Vegas.

Fury confirms that Wilder’s trainer was in the dressing room to check out his gloves before the fight, and there were no issues that arose. As far as Fury is concerned, he beat Wilder “fair and square” and predicting that he’ll never fight again.

The former WBC heavyweight Wilder was knocked down three times in the fight, once in rounds 3, 10, and 11.  Fury didn’t have it all his way, though, as he was knocked down twice in the fourth, and some boxing fans believe he was given a LONG count by the referee Russell Mora.

Fury seemed agitated at the post-fight press conference, bad-mouthing Wilder for choosing not to shake his hand. Wilder may not have been willing to forget about the past issues with Fury over their last fight.

“It was a hard-earned victory. I got up off the floor a couple of times, and I shopped grit and determination. I’m not thinking about anybody else,” said Tyson Fury to Behind The Gloves on his win over Wilder.

“I don’t think much of it, to be honest,” said Fury when told that Anthony Joshua won’t step aside so that he can fight Oleksandr Usyk for the undisputed championship. “I’m going to take a break from boxing and let the other guys fight for the scraps,” said Fury.

It should bother Fury that Anthony Joshua won’t step aside for him to fight IBF/WBA/WBO champion. Oleksandr Usyk for the undisputed heavyweight championship.

If Joshua loses to Usyk again in early 2022, Fury won’t make nearly as much money fighting Oleksandr as he would AJ. It would be a better deal if Fury fought Usyk to protect Joshua from losing again.

“I was thinking, ‘This is boxing. Get up and fight on,” said Fury when asked what was going through his mind when he was knocked down by Deontay Wilder in the fourth round.

Wilder tried to finish Fury in the fourth round, but the bell rang before he could get him out of there. Fury recovered enough in between rounds to make it through the fifth round without getting dropped again.

You can blame Wilder for not going all out in the fifth round to try and bang Fury out of there when he was still a little woozy from the previous round.

“I’m sure he’ll have a lot of excuses to make; he always does,” said Fury about Wilder. He’s a sore loser. He had Everlast MX on.

“His trainers were in the dressing room yet again and checked everything. There are no queries. He got beat fair and square. That’s all she wrote for Deontay Wilder, and I’ll be surprised if he ever boxes again,” said Fury.

Wilder isn’t making any excuses thus far for his loss. The closest thing he said that sounded like an excuse was this comment from Deontay:

“He came to lean on me, try to rough me up, and he succeeded.” 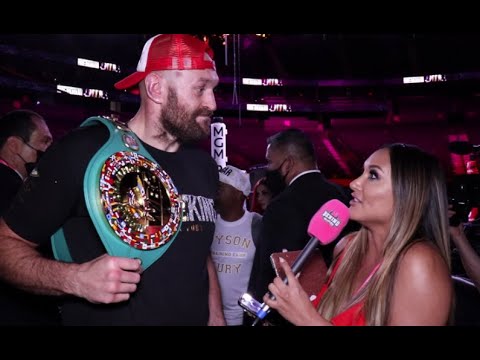