Tyson Fury says he will jump on Deontay Wilder from the first bell on October 9th and keep punching him until he drops.

Fury (30-0-1, 21 KOs) isn’t afraid to give away his game plan for the trilogy match with the former WBC heavyweight champion Wilder (42-1-1, 41 KOs) because he believes he can’t do anything to stop him from implementing it.

Deontay will have his career hanging in the balance on October 9th when he takes on Fury at the T-Mobile Arena in Las Vegas.

Another knockout loss for Wilder will wreck his career, signaling that he;’s no longer one of the major players in the division.

Wilder has put in a lot of work with his new trainer Malik Scott to change his fighting style in hopes of avenging his loss to Fury.

This is arguably the hardest Wilder has ever trained for a fight, and it’s going to be thrilling to see if his hard work pays off.

“I’ve had one of my best training camps I’ve ever had. I’m injury-free and firing on all cylinders,” said Tyson Fury to Yahoo Sports.

“I changed my style from a slick counter puncher to an aggressive puncher within six weeks of training with Sugarhill,” said Fury when asked if it’s possible for Wilder to change his fighting style.

“I’m predicting another knockout,” said Fury in predicting he’ll stop Wilder. “We’re going to start training punches from round one, and I’m not going to stop punching him until he’s on the floor, and that’s how it’s going to go,” said Fury.

Considering that Fury was given an extra training camp due to his COVID-19 illness, he’s got a chance to do well in this fight.

There were rumors that Fury was getting beaten up by his sparring partners for the postponed July 24th fight with Wilder.

Out of nowhere, Fury gets COVID, and it came the right time when he was nowhere near ready to fight Deontay on July 24th. How convenient.

Fury must focus 100% on Wilder

“People say, ‘you can’t learn new tricks,’ but I’m living proof you can learn new tricks,” said Fury. “It took me six weeks to go from a slick counter puncher to an aggressive knockout puncher. Six weeks, that’s all.

“I’ve adjusted to every other person for 31 times, whether they’re big, tall, fat, skinny, whatever,” said Fury.

“100%, you have to focus on Deontay Wilder all the time you’re in the ring,” said Fury. “As long as you focus on your job, you can always do your best, and that’s it,” said Fury.

If Fury gets a little too relaxed in there with his showboating on October 9th, Wilder will catch him with a big shot and knock him out – again.

The fight will be stopped this time, rather than Fury being given a count while he’s clinically unconscious. I still wonder if Wilder would have been given a count if he was knocked out the way Fury was. What was that all about?

Tyson explains why he got dropped two times by Wilder

“I don’t make much of it. He’s just gone down in my estimation as a man,” said Fury about Wilder’s excuses for his loss last year. “I’m just disappointed to hear all that bull s*** from a former champion’s mouth. I almost fear sorry for him.

“I didn’t feel anything,” said Fury when asked if he could feel Wilder’s power in the rematch last year. “No, he dropped me twice in the first fight because I only had six months of activity.

“I lost 147 pounds and fought him after three years out. That was his ONLY chance to beat me, and he didn’t do it then, so he hasn’t got a chance.

“I walked through him last time and didn’t feel any of his punches whatsoever. We’ll see if he can change up his game plan.

“I hope he gives me a challenge because I trained for an absolute war for the second fight, and I didn’t get it.

“It was like a one-sided beat down. I hope he can bring me a much better fight this time and give me a challenge.

“I’m not a heavyweight champion in the world for nothing. I want a challenge,” Fury said.

Talk about someone that makes excuses. Fury is just as guilty as Deontay in making excuses with him trying to explain away the reason he got dropped twice by Wilder in their first fight in 2018. That’s pathetic.

Believe me, if Wilder landed flush with full force in the rematch with Fury as he did in 2018, he’d have gone to sleep in the same way.

It has nothing to do with Fury supposedly having been improved and everything to do with Wilder being hurt by a rabbit punch in the third round in their second fight last year.

Tyson discusses his face-off with Deontay

“Not much, just staring out in front of me with him with his earphones on and his nose rings in,” said Fury on what was going through his mind during his first and only press conference for his fight with Deontay.

“I was thinking, ‘I’m going to tear you to pieces.’ I was just letting him see the man-mountain that was in front of him.

“He didn’t like what he saw and walked away. He put a chink in his armor, and he showed it again.

“Actually, nobody has seen me because I’ve not been anywhere,” said Fury in responding to the comments from boxing fans on social media that he looks thinner.

“I’ve not had anybody in the house. I don’t do live interviews because of COVID.

“They may have seen a photograph or something like that, but I don’t worry too much.

“Yeah, yeah, yeah, that’s my walking around weight,” said Fury when asked if he’ll come into the fight in the 270s,” said Fury.

Considering how Fury beat Wilder last year, it’s not surprising that he wouldn’t be intimidated by him during their face-off. With that said, it doesn’t mean that Wilder can’t beat Fury because he certainly can if he can land one of his big bombs.

At this point, Fury’s ego is up there in the stratosphere to where he believes he can beat anybody on the planet.

When you get an ego like that, you’re asking for trouble because no one can’t be beaten if they get hit by the right shot.

Hopefully, a good referee is working that doesn’t give a long count when Fury gets knocked out or goes in the opposite direction of him when he gets dropped by Wilder.

“Yes, I have him in for all of these big fights,” said Fury about Jared Anderson becoming popular because of the rumors that he thrashed him during training for his July 24th postponed fight against Wilder.

“He’s got the full package, and if he weren’t, I’d tell you. I’d find him out, but he’s got everything you need to be a heavyweight champion.

“He’s got ability; he’s got talent; he’s got determination and balls like King Kong. Because if you haven’t, you cant spar with me. It doesn’t work because you get f**** up.

“He gives me really good work every single time. I’m really happy with him, and I’m sure he’ll be world champion after I’m gone, for sure.

“No, I wasn’t surprised,” said Fury when asked if he was surprised at Oleksandr Usyk’s win over Anthony Joshua last Saturday. “I broke the fight down exactly as it went. It’s quite crazy, actually,” said Fury.

Tyson went a little overboard during the interview in reading an old interview. He had predicted ahead of time that Oleksandr Usyk would give Anthony Joshua problems last Saturday.

Most boxing fans had already predicted that Joshua would have issues with the former undisputed cruiserweight champion Usyk, so it was no great revelation that Fury could reach the same conclusion.

It would have been interesting if Fury had elaborated on whether the rumors of Jared Anderson beating the living daylights out of him during training camp were true.

Boxing fans would like to know if Anderson was and still IS battering Fury during camp. 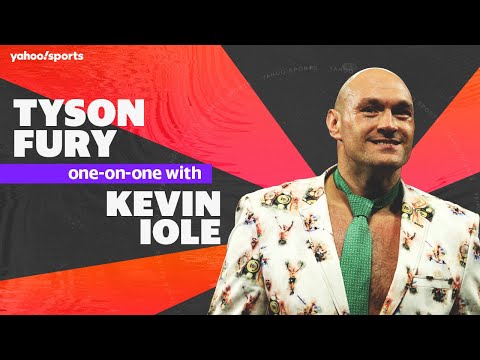