A highly agitated Teofimo Lopez Jr came close to throwing blows with George Kambosos Jr at the end of their kickoff press conference on Friday to announce their June 5th match on Triller pay-per-view.

The 23-year-old Top Rank promoted Lopez (16-0, 12 KOs) took issue with the matter-of-fact way that his IBF mandatory Kambosos Jr (19-0, 10 KOs) calmly told him that his promoters didn’t respect him and that he was going to rip his IBF, WBA, WBC Franchise and WBO lightweight belts from him on June 5th. 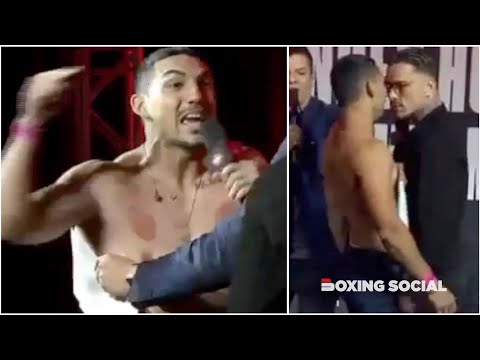 The steely calm way that Kambosos spoke, it was as if he was a dentist talking to one of his patients that he could administer the novocaine.

Kambosos had a mature, adult manner about him that set him apart from Teofimo, who seemed to be coming from a child-like angle. It was odd to watch how different these two were and harder to believe they were actually fighting.

In some ways, it was like watching a replay of the Jermell Charlo vs. Tony Harrison press conferences. Harrison talked circles around a furious-looking Jermell the entire time, and it was so funny to watch.

Perhaps the trigger that seemed to set Teofimo off is when Kambosos Jr questioned whether he would even make weight for the fight, given how huge he was looking today.

Teofimo looked like a 160-lb middleweight during today’s press conference, and he looked totally cut up. Furious at the comment by Kamboso, Teofimo tore off his shirt, which revealed a physique that would be more at home at 160 than t 135.

Teofimo then ran up on Kambosos, who looked painfully thin standing next to him. The difference in the two fighter’s physique was dramatic.

It was like one of those Charles Atlas advertisements of before and after. Kambosos was the thin guy on the beach, whereas Teofimo was the bulked-out muscleman of what your physique would look like after you paid for the Atlas course.

“You’re lucky we’re not fighting today. In reality, I’d put you on a f***ing stretcher,” said Teofimo to Kambosos while pointing his finger at him in a threatening manner.

“Wouldn’t even make weight,” said Kambosos, who clearly knew what he was talking about. Teofimo might have struggled to make even the 160-lb weight limit today.

One of the Triller people then emerged at this point, looking like one of the camera crew rather than a security person. Did Triller not have security for the event? It was very odd.

Looking like he was still upset about Kambosos predicting that he wouldn’t make weight, the bulky Teofimo said, “You’re going to be a f***ng example about why I’m going to put everybody on they a** and I’m going to put my foot up your neck, my dude.”

Teofimo’s harsh language did not affect Kambosos, as he continued to speak to him in an adult grownup manner, telling him calmly, “I’m taking all your belts, all your belts.”

At that point, Teofimo looked like he was ready to be fitted with a straightjacket.

“Definitely, this will put me as the greatest ever in Australian boxing,” Kambosos said. “My focus has been this kid and taking his belts. I’m going into the backyard of the undisputed champion right now,” Kambosos said.