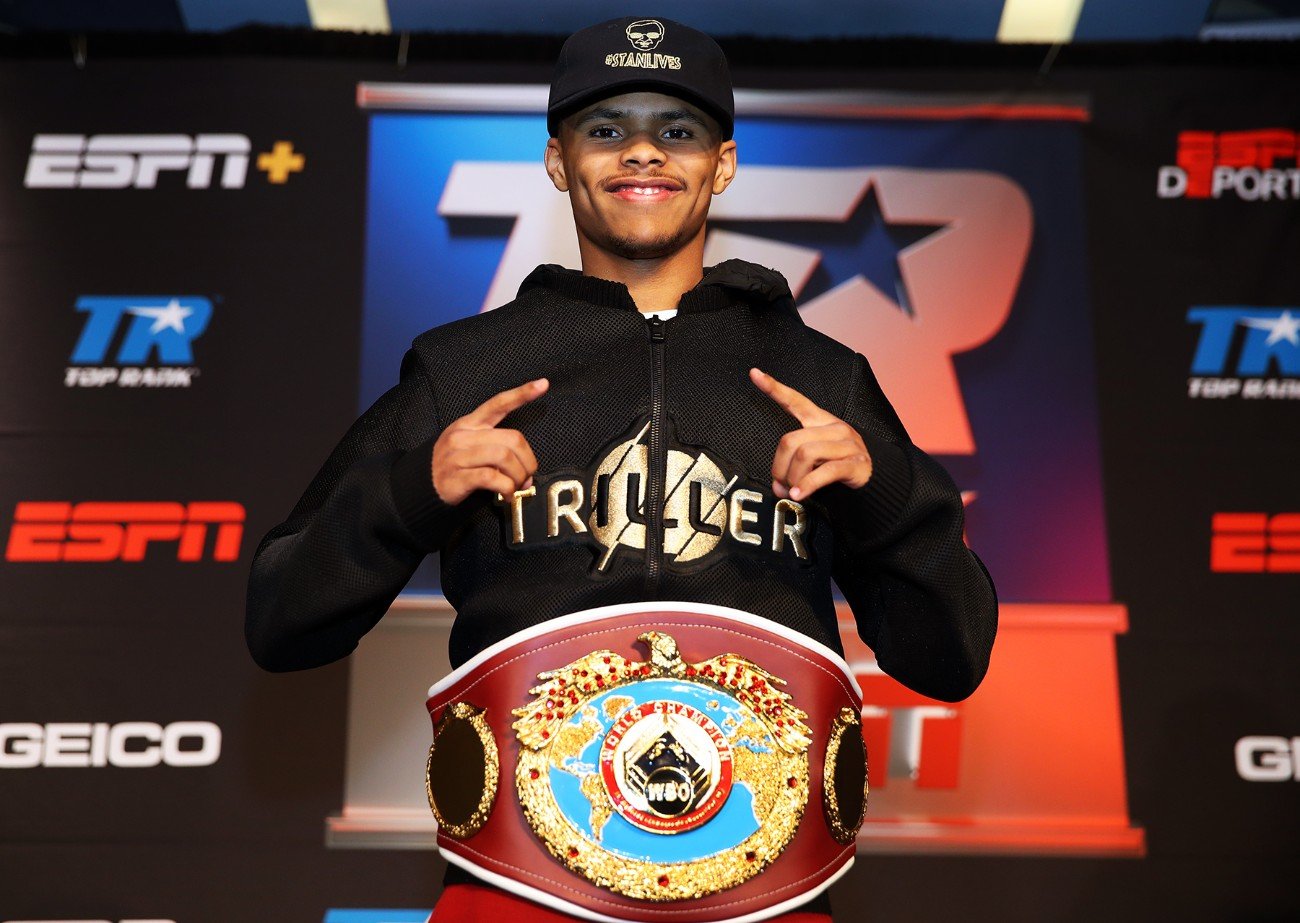 Bob Arum has been using Floyd Mayweather Jr. as a person to compare his fighter featherweight Shakur Stevenson with.  Arum sees the unbeaten WBO 126-pound champion Stevenson (13-0, 7 KOs) as a southpaw version of Mayweather, and he feels he’s heading towards superstardom.

For Stevenson exceed Mayweather’s accomplishments, he’ll need to become a six-division world champion, retire undefeated, and $1.7 billion in pay-per-view revenue generated. Stevenson would need to win world titles in the following divisions: 126, 130, 135, 140, 147 and 154. 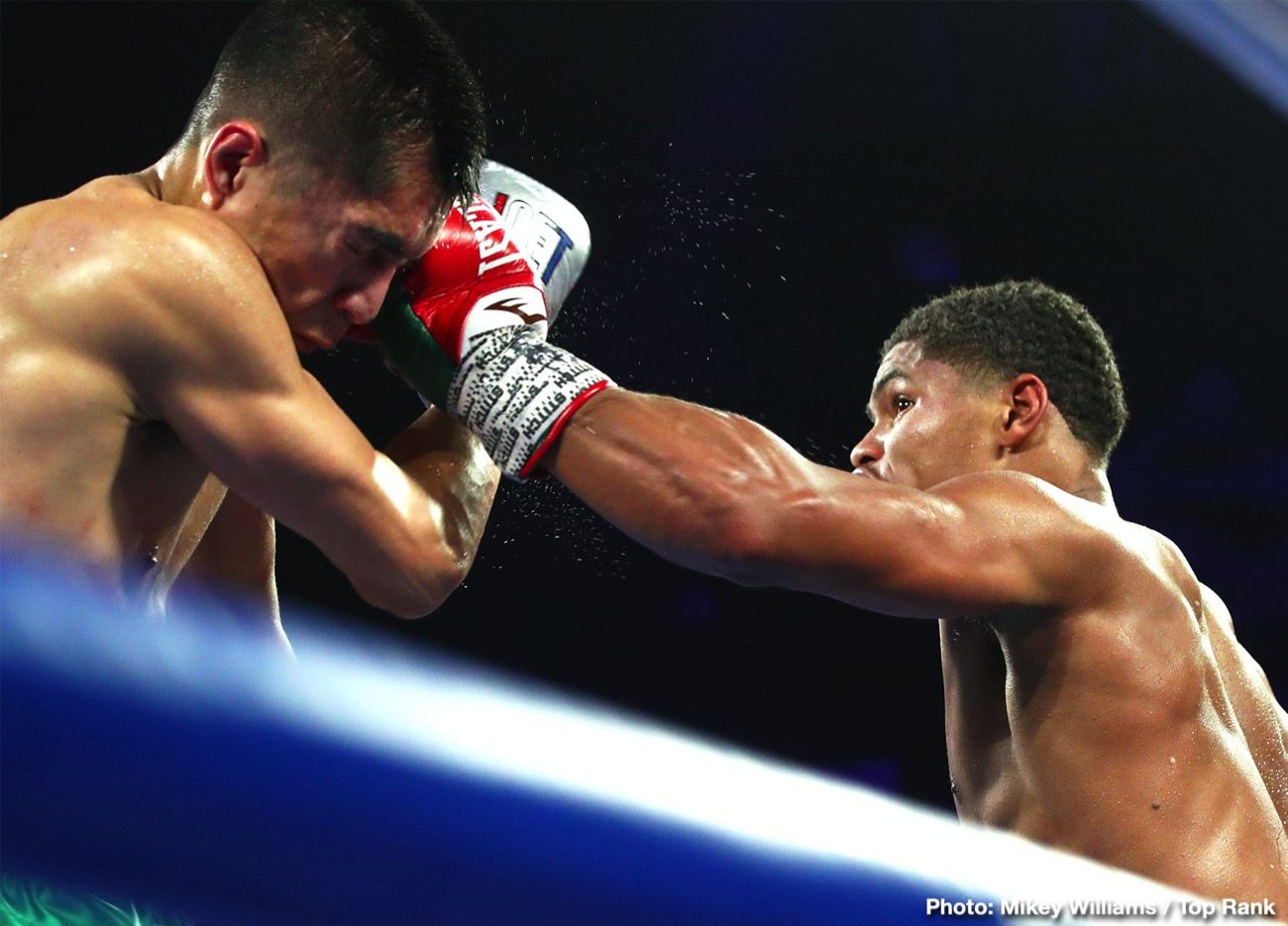 You can see the wisdom behind Arum, saying that Stevenson will be the next Mayweather because the promoter did a similar thing in comparing Vasiliy Lomachenko with Muhammad Ali.

Also, Arum has compared Terence Crawford with Sugar Ray Leonard. If you’ve seen Leonard and Ali, you’ll note that Lomachenko and Crawford are nothing like that in terms of style and, more importantly, talent.

Stevenson is fighting this Tuesday, June 9, against Felix Caraballo (13-1-2, 9 KOs) behind closed doors at the MGM Grand in Las Vegas, Nevada. Caraballo isn’t a contender. He’s just someone that was found for Stevenson to fight.

“Shakur Stevenson is a future star in the sport of boxing, a future superstar,” said Top Rank promoter Bob Arum. “I look at him as the southpaw version of Floyd Mayweather, and I think he’ll exceed the performances by Floyd.

“I think he’s a rare talent. I think he’s a young man that’s growing in size, and I think that 130 pounds will be a brief stop in his career because he’s growing into a welterweight and maybe even a junior middleweight,” said Arum of Stevenson.

“I understand the [comparison] because if you watch Floyd career, as he got older and older he became like a real good defensive fighter, defensive wizard, and I’m real good at that stuff too,” said Shakur in comparing himself to Mayweather.

It’s okay for ESPN commentators to be comparing Shakur with Mayweather, but it looks bad when he’s starting to do it too. ESPN has a reason to be saying that Stevenson is like Mayweather, but it doesn’t make sense for him to take that stuff seriously.

Stevenson fights more like Crawford than he does Mayweather. He’s a little hand speed, but he’s not blistering fast like Mayweather was at age 22, and he doesn’t move like him either.

It’s too early to know if Stevenson can make it big like Mayweather. Shakur has got to be able to fight at a high level for the next 16 years, and he’s got to fight a lot better opposition than what’s been facing. Since Stevenson turned pro, the best fighter he’s fought is Joet Gonzalez. He’s not that good of a fighter.

All we know is the last time Stevenson fought a talented guy in the 2016 Olympics, he lost in a defeat to Robeisy Ramirez. What Stevenson has done as a pro is meaningless because he’s fought weak opposition.