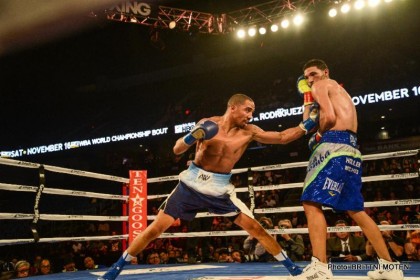 As a result, things calmed down considerably, but that’s now how the fight started. The first few rounds were anything but under control. Rodriquez moved quickly across the ring at the opening bell and let go with several wild swings. When Ward attempted to tie him, La Bomba tried to throw him off. Ward didn’t let him, so they were stressing leverage to the limit. It seemed as though Rodriquez, who missed making weight by two pounds, felt his only chance was to land a haymaker. He might have been thinking that Ward’s fourteen month lay off might have made him rusty. The opposite was true. Ward had successful surgery needed to repair a torn rotator cuff. Now he also had a good right to go along with his excellent left.

The first two minutes of round one action saw Rodriquez putting the bum’s rush on Ward. By the end of two minutes, Ward already had Rodriquez backing up a bit. He started landing his jab, which is actually a power punch. He landed it offensively and defensively. The punch was more dramatic when thrown defensively, because that usually meant Rodriquez was coming fast right into it. His head would be painfully jarred in reverse.

The fight continued to be rough and ugly until Jack Reiss’ action in the fourth. As things started to settle into more of a boxing match than a MMA match, Ward started to pull away. Rodriquez continued to make powerful, but wild attempts at landing a big punch. Ward kept his cool, and made Rodriquez pay by landing fast, sharp and accurate counters. The light heavyweight body and chin of Rodriquez weathered the storm, but the punches must have been depleting his strength. He just couldn’t seem to get anything going. In his corner, trainer Ronnie Shields pleaded with him to use his jab. Later in the fight he gave up trying to get him to do that, knowing that his man was so far behind that he had to make something dramatic happen. It’s not too often you will hear a trainer tell his man to start off a combination with an uppercut!

As the fight progressed, Ward was doubling and tripling Rodriquez up in just about every category: punches thrown, punches landed, power punches thrown, power punches landed, etc. The scoring became so one sided, that even a knockdown would be enough. Rather, La Bomba’s only chance was a knockout. It wasn’t going to happen, not with a smart fighter like Andre S.O.G. Ward. He was too smart and too experienced to let that happen. In the twelfth and final round, Rodriquez sustain a small cut to the left eyelid. Time was called while referee Reiss confirmed the cause with the judges. When action resumed, nothing had changed. Rodriquez tried a few more times to land the home run, but Ward saw to it that Rodriquez stayed stymied.

After the official UD was announced, Ward pulled his championship belts over his shoulder and acknowledged what everyone knew. Rodriquez climbed out of the ring, so HBO’s Max Kellerman had an easy time getting to Ward for the post-fight interview. Ward was pretty happy with his performance, pointing out that they expected the kind of fight that Rodriquez brought. Apparently Ward thought that Rodriquez was going to be the kind of reckless, awkward but dangerous type of fighter. He explained that certain things that Rodriquez said during the pre-fight build up, and the fact that in his first championship fight, Rodriquez couldn’t make weight! Ward thought that was very unprofessional. As far as what’s next, Ward did want to be cornered, just the same as when in the ring. He will take his time, and weigh all his options and then make his move.