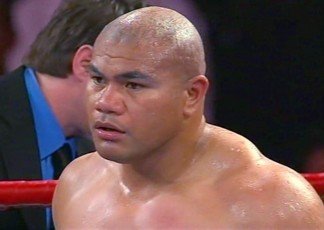 Hamilton City, Claudelands Showgrounds: Ringside: Chants of Tua! Tua go up! The ring announcer gets an A plus for animation. Never quite seen or heard a ring announcer throw himself around the ring with so much vigour and enthusiasm in introducing fighters. Fair to say he is an excitable type of chap.

Alexander Ustinov ring walk: All you can really say about the man is he is one very big piece of humanity. His ring walk music of the Russian variety is music not often heard in this part of the world. He leaps the top rope of the ring with ease and that impressed the hell out of the crowd. At 6ft 8 and 139 kilograms (according to ring announcer) his immensity makes him a proposition for the sheer fact of his immensity – he carries no excess weight and appears in exceptional condition.

David Tua ring walk: Ring walk music is some old crooner – we are talking 1950s. Interesting choice of music and not what the crowd expected. David looks in as good a nick as we have seen him in the last decade. Not ripped in the manner of a prime Holyfiend or Frank Bruno but Tua has never been that type of body type and very few are. The crowd lights up. No guess work as to who the crowd are rooting for in this fight. Tua looks calm, composed and focused. Henry Shuster Tuas trainer looks so relaxed he could be sitting on a beach in French Polynesia.

The fight billed as David and Goliath couldn’t be more aptly named. Tua weighting in a 107 kilograms and standing at 5 ft 10 is giving away 32 kilograms and nearly 10 ½ inches in height to Ustinov.

A huge buzz of expectation abounding around the arena. The corporate area seems to be a recession free zone. Bubbles and fine food, suits and ties and designer dresses in abundance are on show.

The short of this fight is can Tua bridge the gap between he and Ustinov and touch him. If he can and consistently so he wins, if he can’t a very long night at the office for Tua. I am picking the latter.

The stare down is on for David V Goliath and both fighters don’t shy away.

If David manages to drop this guy he had better yell timbre!!! And get out of the way very quickly

Tua comes out. Ustinov looks fit, calm. Not overawed by the pro-Tua crowd. Ustinov pawing with the jab. Ustinov continuing to paw. Ustinov brings the jab from the hip in an upward motion as opposed to straight out from his shoulder. Ustinov setting up off the left. Ustinov working Tua with the left hand. Misses with a slapping right. Tua inactive and appears to be looking for a shot but not sending it. Ustinov continues to paw, Tua continues to catch the pawing left hand thrown from the hip.

Ustinov round – simply did more.

David comes out. Looking to press forward. Ustinov pawing and pushing with the jab. David looking to unload but being taken out of his game by Ustinov. David looking but not taking. David looks off key and Ustinovs left hand is adding to that equation in not letting him get set.

Ustinov round – did more.

More of the same. Ustinov pawing. David goes for a leaping left hook but misses. David pressing forward and unloads with a combination. Ustinov ties him up. David looking but not building any workable platform by way of body shots. Ustinov looks for a 1-2 down the shoot. Grazes by Tuas head. David trying to work Ustinov to the body but not sitting on his punches. David goes shopping with the left. Ustinov lands his own. Crowd cheering every David connect but Ustinov not phased by the few that find a home. Ustinov back pawing with the left in keeping Tua chequed.

Round hard to call. Very close – even.

Ustinov pressing forward. Trying to work his jab over the top of Tuas left hand. Ustinov shopping with the right hand. David tries for a 1-2 over the top but comes up short. Ustinov barely sweating which is remarkable given we are in the fourth round. Ustinov working Tua around with his left hand. Tua looking to land but not getting in a position to do that. You can see David is shopping for the fight ending left hook.

Ustinov round – the busier fighter…and by a margin.

Tua needs to get more active. The touching of gloves at the start and end of each round is odd. Tua lands a left. Doesn’t affect Ustinov at all. Crowd chanting but David simply isn’t being proactive enough. Real estate all being dictated by Ustinov. Tua goes to the body but even that’s proving difficult for him. Tua looks a step off key. Big miss with the right hand by Tua. Ustinov moving Tua backward. Not a good place for Tua to be. Ustinov carrying his hands low, shooting shots from his hip, no defensive guard to speak of. Dangerous against a puncher like Tua but for the fact Tua is not punching enough to endanger the big man

More of the same. Ustinov pawing. Ustinov is bringing the fight to Tua but Tua seems bereft of ideas on how to bridge the gap in timing a shot on Ustinov. Tua hasn’t really entered the fight in a meaningful way.

Ustinov has still barely broken a sweat. Tua goes for a leaping left hook but is off with his timing. Tua goes to the body but Ustinov simply backs up and Tua hits nothing but air.

Centre ring, David tried for the overhand left, landed but ineffectually. David needs to get into this fight in with something but easier said than done given Ustinov is peppering him from the outside. Ustinov simply holding him at bay with the left. Grazing left, gets a roar from the crowd but does nothing in the way of damage. David pushes forward Ustinov falls back. David lets one go and misses by quite some margin. Does Ustinov sweat?!

Either it’s a walk in the park or the man has no sweat glands. More of the same off the back of the left hand paw. Tua walking forward and moving head well in getting in the pocket but his timing is off. David getting in position but not throwing. Just wrote that and he lands a shot but Ustinov wears it and wears it well and goes back to pawing with his jab.

David bouncing, but not throwing. Ustinov coming forward. David now pawing with his jab. Ustinov pitty patting the jab. David lands a left, no damage. David is spending to much time hunting for the fight ending shot…then lands a good shot. No effect on Ustinov. David doesn’t appear to be able to pull the trigger with any type of timing or consistency.

Ustinov round – more of the same.

Ustinov back to pawing. David hunting for the get out of unanimous decision loss shot. Ustinov pressing forward. Tua sends a big over hand right over the top and comes up short. Ustinov arm punching as opposed to using his whole body. Doesn’t drop his mass behind his shots. A waste of mass but nonetheless still winning in a streak. Ill say it again David is simply off timing. David lands an overhand right. No damage. David looking for the one shot and it’s not coming. They go at it mid-ring in the best exchange of the night but times up. Fight over.

My call is Ustinov by unanimous decision in a canter. Did more and simply nullified everything David wanted to do in taking total control of the ring real estate. Ustinov is not an exceptional fighter in any stretch but his size is such a difficult proposition when 5ft 10 and David simply couldn’t bridge the gap between he and Ustinov. Not the result the pro-Tua crowd wanted.

Decision is in – UD to Ustinov.