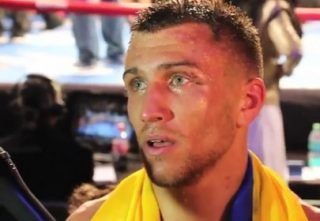 It would be a superb match-up between two of the finest boxers currently doing their thing in the lower weight classes, and Yuriorkis Gamboa wants it: a fight with the man promoter Bob Arum has gone as far as to say is the best he has ever seen – Vasyl Lomachenko. Gamboa, back training with Ismael Salas, ha snot fought since December of last year, but he is currently training and a fight will hopefully be announced soon.

Gamboa, a former champion at featherweight as well as an interim champ at 130-pounds, has been defeated just once in his pro career – in that thriller with new pound-for-pound star Terence Crawford – and he said on Twitter shortly after watching Crawford’s master class of a win over Viktor Postol how he gave Crawford a much tougher fight and this is why Top Rank are “keeping Vasyl Lomachenko away from me.” 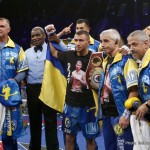 Read moreBob Arum says Vasyl Lomachenko-Terry Flanagan is a possibility for next year, in England 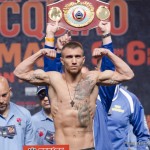 Due to his stunning and brutal KO win over the more than capable Roman “Rocky” Martinez, Ukraine’s Vasyl Lomachenko is currently getting all kinds of praise from many people. An amazing amateur talent – wining, amongst other top honours, two gold medals at Olympic level – the 28-year-old southpaw looks set to match his unpaid success in the pro ranks; if that’s possible – 396-1, a truly staggering set of numbers, makes up Lomachenko’s amateur record, after all. At just 6-1(4) Lomachenko has already engaged in six world title fights (WBO) and the man known as “Hi-Tech” has captured two major belts.

Read moreVasyl Lomachenko: has any other 6-1 fighter ever looked so great!

NEW YORK (June 13, 2016) — He came, He saw, He annihilated. Two-time Ukrainian Olympic gold medalist VASYL LOMACHENKO is now a two-division world champion and just as he did with his first professional world title, he won world title No. 2 in a record least amount of fights — SEVEN! Lomachenko (6-1, 4 KOs) captured his first world title — the vacant World Boxing Organization (WBO) featherweight title — in his third professional bout, winning a 12-round majority decision over unbeaten Gary Russell in 2014 to tie the record for fewest fights to win a world title.

Vasyl Lomachenko made history on Saturday night when he defeated Roman ‘Rocky’ Martinez to capture the WBO super featherweight title in his 130 pound debut. For Lomachenko this is only his 7th professional contest, giving him the unique distinction of becoming the fastest fighter to ever win world championship titles in more than one weight class. Lomachenko had previously won the 126 pound version of the WBO belt when he defeated Gary Russell Jr in his 3rd professional match. He defended that title three times before venturing north to challenge Martinez.

Vasyl Lomachenko (6-1, 4 KOs) used his superior boxing skills to defeat WBO super featherweight champion Roman “Rocky” Martinez (29-3-3, 17 KOs) by a 5th round knockout tonight in a one-sided fight at Madison Square Garden in New York. Lomachenlo made it look easy in hitting Martinez and rarely getting hit back in this one-sided contest. 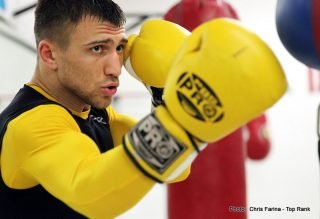 HBO Boxing lights up Broadway on the eve of New York’s Puerto Rican Day Parade when HBO BOXING AFTER DARK: ROCKY MARTINEZ VS. VASYL LOMACHENKO AND FELIX VERDEJO VS. JUAN JOSE MARTINEZ is seen SATURDAY, JUNE 11 at 10:00 p.m. (live ET/tape-delayed PT) from The Theater at Madison Square Garden, exclusively on HBO. The HBO Sports team will be ringside for the event, which will be available in HDTV, closed-captioned for the hearing-impaired and presented in Spanish on HBO Latino.

Read moreMartinez vs. Lomachenko & Verdejo vs. Martinez on HBO Boxing After Dark this Saturday 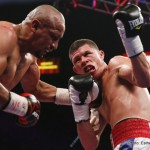 It is an incredible fight for Rocky Martinez. It has been an opportunity we have been looking for a long time. As everyone knows, Rocky Martinez has already been a world champion three times. He has a lot of experience and he has been looking for this type of opportunity. Being the main event on HBO will give him a lot of exposure and a win over Lomachenko will be incredible for his career. In our camp, we are really confident about this fight — confident that we can win this fight. Rocky is the bigger guy and the guy with the experience and he is hungry. Also to fight on the weekend of the Puerto Rican Day Parade is an incredible thing for Rocky Martinez.