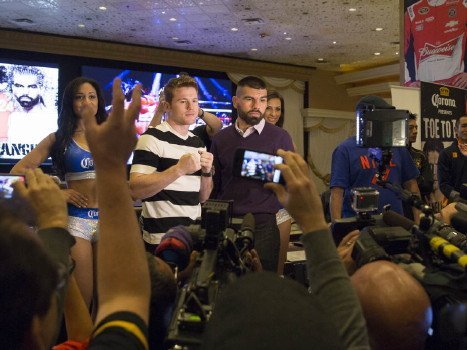 (Photo credit: Esther Lin/Showtime) This Saturday on March 8th Canelo Alvarez will be taking on the hard hitting Alfredo Angulo. It will be Canelo’s first fight back since he suffered his first defeat at the hands of Floyd Mayweather Jr. If there is any doubt in Canelo that he can’t make a successful comeback I’d suggest he erase those thoughts now. Angulo is slow but does pack a good punch and if he senses that Canelo is on the defense he will attack.

Canelo possesses power as well and I believe him to be the far more superior boxer than Angulo. Although I must admit that under the wing of Virgil Hunter Angulo seems to be improving. If Angulo has the right game plan going into Saturday’s fight we can see a very competitive fight between the two heavy hitters.

Read moreAlvarez-Angulo: Will Canelo bounce back from his loss to Mayweather? 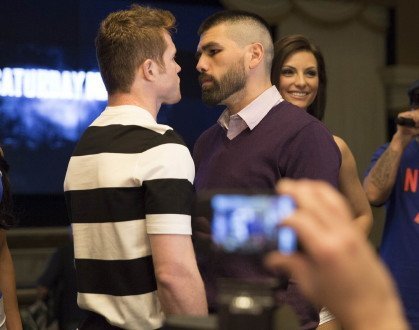 The pair will meet at the MGM Grand in Las Vegas, in front of what is expected to be a sold out arena, with Canelo being tipped as the favourite in the fight which will be broadcast live and exclusive on BoxNation. 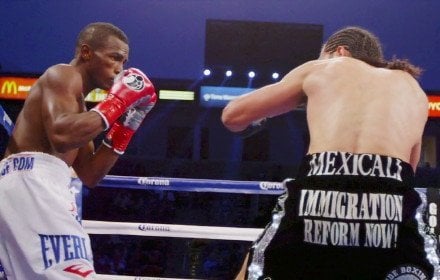 Boxing fans will get a chance to see how good Saul “Canelo” Alvarez’s punch resistance is this Saturday night in his Showtime pay-per-view clash against the hard-hitting Alfredo Angulo (22-3, 18 KO’s) at the MGM Grand in Las Vegas, Nevada. This is going to be a first for Canelo in terms of him facing an opponent that has power equal to his own, and it should give fans a good chance to see if Canelo can stand up to the kind of big power shots that Angulo will be hitting him with.

Angulo’s trainer Virgil Hunter has been very impressed with Angulo’s power ever since he started training him, and he thinks he’s got the kind of punch that could lay the 23-year-old Canelo out, especially if he’s able to get him into a fatigued state.

Read moreAngulo to test his debilitating power on Canelo this Saturday

Thanks, everybody for joining us today. We’re very excited to feature the star of the Saturday, March 8fight, none other than Canelo Alvarez and his entire team: Ricardo Alvarez, his brother; Chepo Reynoso and Eddie Reynoso, both his trainers; and also Richard Schaefer, Chief Executive Officer of Golden Boy Promotions.

Before I introduce Richard, I would like to say that this is our last press event before we head into fight week, and everybody please look for your fight week media schedules. We have great events planned for fight week and we hope to see you there. If you can’t make it to the fight, keep an eye on your inbox because we will be sending you all sorts of press materials to help your TOE TO TOE coverage, including live streams embedding codes, quotes and photos. As always, we appreciate your continuing support. 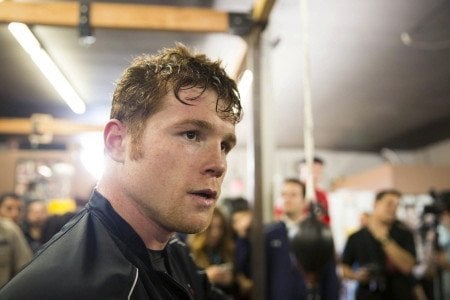 Schaefer claims 12k tix are sold for #CaneloAngulo with about 2k left. All $25s are gone he said. #boxing

In what you would have to interpret as a negative sign, former WBA/WBC light middleweight champion Saul “Canelo” Alvarez’s March 8th fight against Alfredo Angulo (22-3, 18 KO’s) still hasn’t sold out the MGM Grand in Las Vegas, Nevada despite having been on sale for quite some time. As you can see, there are still 2 thousand tickets remaining for the fight with a little less than 2 weeks to go before the bout. Considering that this fight is going to be sold on Showtime pay-per-view as well, this could mean that fight fans won’t be interested in purchasing it.

Read more“Countdown To Canelo Alvarez Vs. Alfredo Angulo” To Premiere This Sunday

NEW YORK (Feb. 20, 2014)—SHOWTIME Sports will offer a robust block of programming across cable and digital platforms in advance of the SHOWTIME PPV presentation of “TOE TO TOE: Canelo vs. Angulo,” a live four-fight pay-per-view event on Saturday, March 8 at the MGM Grand Garden Arena in Las Vegas.

More than a week’s worth of live and taped programming will be available on SHOWTIME, SHOWTIME EXTREME®, CBS Sports Network, SHOWTIME ON DEMAND®, on mobile devices via SHOWTIME ANYTIME®, and the premium network’s website at SHO.com/Sports before March 8.

Read moreSHO Sports Presents Bevy of Programming In Advance of “TOE TO TOE: Canelo vs. Angulo”

Thanks, everybody for joining us today. We’re very excited to be talking about the fantastic undercard of the Canelo vs. Angulo pay-per-view event, which is taking place Saturday, March 8 in Las Vegas at the MGM Grand Garden Arena and live on Showtime PPV®. Today joining us will be Leo Santa Cruz, Cristian Mijares, Omar Figueroa, Carlos Molina, Jermall Charlo and Eric Gomez, who will be running the call.