Skip to content
Tonight from the MGM Grand Garden Arena in Las Vegas, Nevada, Tim Bradley and Manny Pacquiao will compete for the WBO Welterweight title in the main event of a four bout HBO PPV, presented by Top Rank, Inc.

“At this point there’s some breaking news about Triple G’s future that you’ll have to talk about with managing director of K2 Promotions Tom Loeffler. 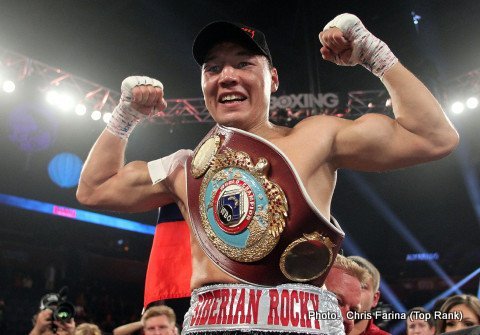 After winning the WBO Junior Welterweight Championship by stopping heralded tough guy and incumbent title holder “Mile High” Mike Alvarado in the reigning champ’s hometown of Denver, Colorado, on October 19th of last year, most fight fans would have guessed that big fight opportunities would be easily attainable for undefeated Russian native Ruslan Provodnikov in 2014.

With sledgehammers for fists and an iron chin to match, the irresistible force at 140 pounds always displays violent drama in the ring whenever he graces the light blue canvas…the kind that brings enthusiasm to arenas and excites fight fans around the world.

The 30 year old champ represents the kind of warrior that most avid boxing enthusiasts are willing to support.

So with a fan friendly style and a piece of coveted hardware around his waist, why is the HBO featured title holder still searching for a suitable challenger? While most fight fans and boxing writers are heavily favoring the reigning title holder on November 16th, Edwin’s prolific trainer truly believes that his fighter is unlike anything Ward has ever seen in the ring.