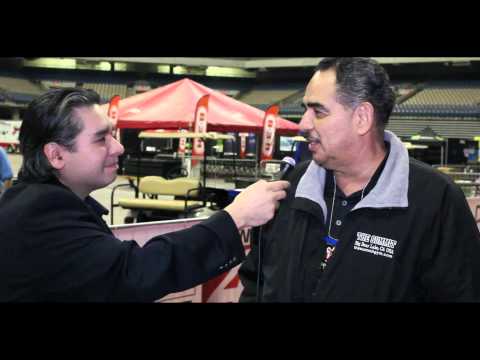 “At this point there’s some breaking news about Triple G’s future that you’ll have to talk about with managing director of K2 Promotions Tom Loeffler. But because of Gennady’s recent loss, the tragic and sudden passing of his father, there’s a very good chance that the fight won’t happen in April,” stated the proprietor and head trainer of “The Summit Gym” in Big Bear Lake, California. “The passing of Gennady’s father has been a huge blow to all of us, so we’re very thankful for all of the prayers and support we’ve been getting from his fans.”

The WBA Champ’s father, Mr. Gennady Ivanovich Golovkin, passed away at age 68 on February 18th as a result of a sudden and massive heart attack.

But upon conducting the remainder of the exclusive interview with the always astute boxing coach, Mr. Sanchez offered a couple of very telling “Easter Eggs” for the always inquiring and knowledgeable fight fans.

When asked about the possibility of Triple G eventually facing the winner of the scheduled June 7th showdown between universally recognized Middleweight Champion Sergio Martinez and future “Hall of Famer” Miguel Cotto, the dedicated trainer gave somewhat of an unexpected response.

Read:  Gennady Golovkin Aiming For “Biggest Win In My Career” In Third Tango With Canelo

“I really don’t think either the winner or the loser is going to be too anxious to face an undefeated champion like Gennady at this point in time,” suggested Abel Sanchez. “Both men are Junior Middleweights and are at the end of their careers. There’s really no reason for them to face a guy who’s in his prime right now and a strong Middleweight like Gennady.”

“But we would definitely love the chance to face either one of them. I think it would be an historic fight. I would like to think that Martinez, being the lineal Champion, would want to give an opportunity to a currently ranked Middleweight fighter to ‘pass the torch’ before he retires. It doesn’t necessarily have to be against Gennady, but I think it’s important for the health of the sport that he gives someone who is a strong contender or current title holder an opportunity to earn that distinction.”

“Obviously we would love to be the fighter to get that opportunity against Sergio Martinez.”

Although Mr. Sanchez seemed somewhat hopeful that a fight between Triple G and Maravilla could potentially materialize in the near future, anyone truly listening to his respective response could have interpreted his words as an indirect endorsement to seek a completely different pairing.

Perhaps Bob Arum, Peter Nelson of HBO Sports, and Tom Loeffler have already thought of a contingency plan at 160 and 168 pounds.

To receive more clarity on Triple G’s current status in the sport and his future plans for 2014, “Boxing 411” took the advice of the prolific trainer and caught up with Tom Loeffler, who was coincidently at the Alamodome as well.

“Everything is officially on hold right now regarding Gennady,” affirmed the director of operations for K2 Promotions. “He won’t be fighting on April 26th because there’s a 40 day period of mourning for his family, which is the tradition within his culture. Right now we just want to give Gennady whatever time and support he’ll need to get through this very difficult situation.”

“I really don’t want to speculate when I think he’s going to be able to return to the ring, because I’m really not sure. But what I can say is that Arum and I have discussed the potential of a PPV event with Chavez and Golovkin in the main event of the evening when he does return. It’s one possibility.”

“We’ve been very clear from the very beginning regarding potential opposition for Gennady in other weight divisions. His unique attributes create a lot options for him. But the match-up would have to make sense to everyone involved for Gennady to compete in a heavier or lighter weight division at this point in his career.”

If styles truly make fights, boxing fans should hope that this superb style pairing materializes. Pound for pound one of the sturdiest chins in boxing would potentially be pitted against one of the hardest pound for pound punchers in the entire sport…the irresistible force against the immovable object.