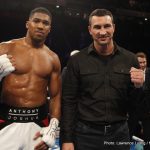 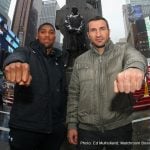 The latest instalment of the popular “The Gloves Are Off” show aired on Sky Sports last night, and heavyweights Anthony Joshua and Wladimir Klitschko sat across one another as Johnny Nelson peppered them with questions regarding their fast-approaching Wembley showdown. 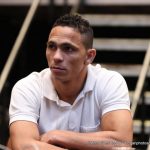 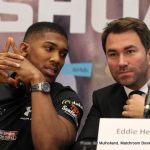 Maybe we should call him Anthony “Money” Joshua. That nickname is of course exclusive property of one Floyd Mayweather Junior; currently the richest, most successful prize fighter in boxing history. However, as stinking rich as he is, Mayweather never earned himself the staggering total of a $billion.

But Joshua, in speaking with GQ Magazine, says that this is now the goal he has to aspire to. Reflecting on how the status of having made it big has changed drastically in today’s world, Joshua says that becoming a millionaire is no longer the huge achievement it once was.

Former World Champion Wladimir Klitschko is facing IBF champion Anthony Joshua on April 29 at Wembley Stadium, and Wladimir is determined as never before.

“I am obsessed with winning this fight”, Wladimir Klitschko said at today’s media event in Austria in front of about 50 journalists. “It’s important for me to prove to myself that I am able to defeat every man facing me in the ring. I am ready to walk a long and hard walk to show myself that I can master myself and can be proud of myself.” 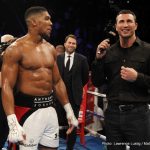 Heavyweight living legend “Big” George Foreman is as excited as the rest of us ahead of the big (very big; 90,000 tickets sold for a monstrous Wembley sell-out) Anthony Joshua-Wladimir … Read more

Plenty of people will make plenty of money as a result of the fast-approaching Anthony Joshua-Wladimir Klitschko heavyweight title fight showdown. The two fighters will make millions, as will the promoters; while re-sale ticket outlets are aiming incredibly high.

The fight, a complete sell-out at Wembley with a staggering, record setting 90,000 tickets all gone, will of course go down on April 29, and fans are hoping for a great fight. Seen by many as a 50/50 match-up, the big winner could be the money men. 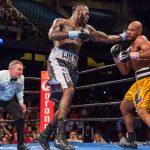 Things may well change, and perceptions will definitely change, if Anthony Joshua can beat ex-champ Wladimir Klitschko on the 29th of this month; but right now, rival heavyweight ruler Deontay Wilder has plenty of people on his side when he says he is “on a whole other level” to the reigning IBF champ.

Wilder, in speaking with FightHype, made this claim and he says he has more experience and has faced more styles of fighters than has AJ. Just who is the better fighter of the two right now?