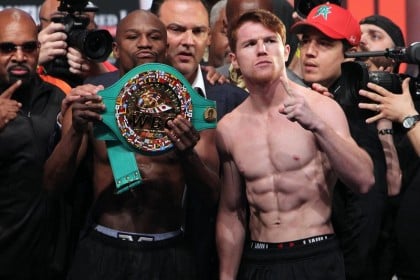 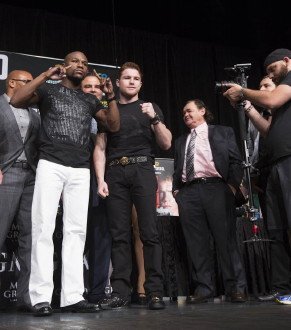 Mayweather Jr. thinks Canelo wouldn’t have won one fight if all of his previous bouts had been against him instead of guys like Alfonso Gomez, Kermit Cintron and Matthew Hatton.

I think Mayweather Jr. may be right. It’s difficult to picture Canelo winning one fight if all of his fights were against Mayweather. There definitely is a lot of weak opposition that Golden Boy Promotions has matched Canelo up against for some reason. WBA super middleweight champion Andre Ward doesn’t see any way for the WBA/WBC junior middleweight champion Saul “Canelo” Alvarez (42-0-1, 30 KO’s) to beat Floyd Mayweather Jr/. (44-0, 26 KO’s) this Saturday night other than maybe getting lucky by landing a big shot that knocks out Mayweather. Ward doesn’t think that there’s any possibility that Canelo can out-box the much faster and much better skilled Mayweather Jr. over 12 rounds.

Ward also thinks that the weight that the 170+ Canelo will be taking off to get down to the 152 lb. catch-weight could lead to Canelo running out of gas in the later rounds of the fight.

A painfully thin WBA/WBC junior middleweight champion Saul “Canelo” Alvarez (42-0-1, 30 KO’s) weighed in on Friday in the WBC mandated 7-day weigh-in for his fight with Floyd Mayweather Jr. (44, 26 KO’s) on September 14th, and not surprisingly Canelo is still over the catch-weight limit of 152 pounds. Floyd Mayweather Jr. is fixing to get the biggest payday of his career against the red-haired Mexican fighter Saul “Canelo Alvarez on September 14th. Mayweather will be collecting $41.5 million bucks in the fight, according to Golden Boy Promotions CEO Richard Schaefer. There’s also a chance that Mayweather could make even more than that figure if the Mayweather-Canelo fight breaks the all-time PPV mark. I don’t think it will, but there’s a chance.

Canelo is said to be making over $10 million for the fight, according to Dan Rafael. That’s pretty good money for a fighter that has never really fought anyone good during his career other than Austin Trout. Canelo is more famous for being famous than for having accomplished anything special during his career.