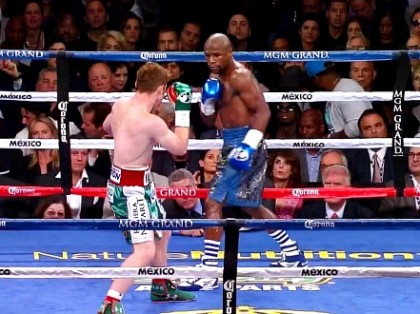 I really feel sorry for the judge that scored the fight even, because a score like that made this person look out of touch with what happened in the ring tonight. It wasn’t even score. It was a was one-sided whipping by Mayweather where at best you could only give Canelo 3 rounds, and that’s by really ignoring the face that Mayweather still controlled the rounds where Canelo did some good things.

Canelo tried hard to land his punches in every round, but Mayweather did a good job of slipping them by moving his head to avoid the punches. Canelo looked helpless to land with any consistency until the last 4 rounds of the fight where he got really desperate and started attacking all out. The problem is Canelo didn’t have the foot speed or the stamina to move quickly enough to put his punches together.

Mayweather kept hitting Canelo with jabs and right hands before Canelo could even react to try and block them. After Mayweather would land, Canelo would try to counter him with something, but he still ended up missing more often than not.

Matthysse fought with a swollen right eye from the 6th round on, but he was still able to fight at a high level despite the swelling.

The referee never took points off for Garcia’s constant clinching. It’s hard to imagine why the referee let Garcia get away with the holding because it stopped the flow of the fight because as soon as Matthysse would get near him, Garcia would grab him.

Matthysse appeared to sweep 5 of the last 6 rounds of the fight with his aggression. The one round where he didn’t dominate was the 11th where the referee made a mistake of giving Garcia a bogus knockdown.