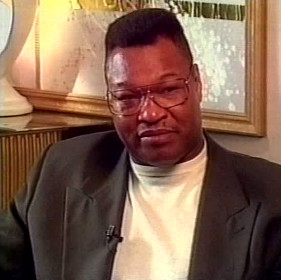 By James Slater: Years from now, how will the historians of our great sport judge things if the super-duper-mega-fight we all want to see happen never actually takes place? I’m talking of course about Floyd “Money” Mayweather against Manny Pac-Man Pacquiao.

What with Pacquiao’s recent retirement talk and Mayweather’s impending jail time, it doesn’t look like the fight will actually come off; although some people remain hopeful it will. One man who has wanted to see the fight and still does has come out and said that in his opinion it is Mayweather’s fault the fight hasn’t happened, and that it will be “Money’s” fault if the fight never happens: heavyweight legend Larry Holmes.

Speaking with Gulf News recently, “The Easton Assassin,” a man who would have never turned down the kind of money that is on the table for Pac Vs. Floyd (somewhere around $30 mil to $40 million each!) said Mayweather is the bad guy as far as the failed meeting is concerned..

“If they never fight, it won’t be Pacquiao’s fault,” Holmes said of the would be mega-clash. “Every time they came round to fighting, Mayweather put his excuses in. Pacquiao did all he can. He did all I would have done. I think Mayweather just got a little too scared if you ask me.

“Pacquiao was the one going up a weight-class for Mayweather, not vice-versa, and Mayweather is the one who can’t earn a big price unless he fights Pacquiao, not the other way around. Pacquiao is a good fighter, the greatest of all time. People have always paid to see his fights and always will.”

Holmes’ comments are sure to annoy Mayweather fans, and to be fair, Mayweather HAS earned big money in his own fights. As Floyd has said many times; Pacquiao will earn his biggest-ever payday if he faces him. Of course, that works both ways. But is Larry serious when he calls Pacquiao THE greatest fighter of all-time? How many comments will that statement alone generate!?

“If he thinks Pacquiao is taking drugs, so what,” Holmes said. “He should just say ‘you take it, you kill yourself, that isn’t going to help you, because with my talent and ability I believe I can still beat you.’ But he was too scared to take that challenge.”

There’s that word again, “scared.” Is Mayweather really scared of Manny Pacquiao, for any reason? I don’t think so. But millions of people will listen to what Holmes says and he seems adamant about his opinion.

How will the historians look back on the careers of Mayweather and Pacquiao if they never do fight though? Right now, Mayweather has his supporters and Pacquiao has his. Personally, I think both great fighters are at fault. The potential classic that is these two going at one another should never have ended up as such a tiresome soap opera.