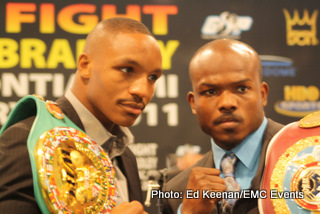 Pontiac, Michigan (December 7, 2010) — One of the most anticipated fights in boxing — and the biggest bout of a young 2011 — will take place when undefeated world champions DEVON ALEXANDER “The Great” and TIMOTHY “Desert Storm” BRADLEY duke it out at the 140-pound weight limit on Saturday, January 29 at the Silverdome in Pontiac, Michigan.

Boxing fans have been waiting for years to see these two young world champions collide. The St. Louis phenom Alexander (21-0, 13 KOs), who will put his unblemished record and World Boxing Council (WBC) super lightweight championship at risk while Bradley (26-0, 11 KOs), from Palm Springs, Calif., enters the bout with a similarly perfect record and his World Boxing Organization (WBO) junior welterweight crown on the line.

Tickets, priced from $25-$400, will go on sale This Friday! December 10, and can be purchased at the Silverdome box office, by calling (248) 338-2500 or online at www.silverdometickets.com. The event is being promoted by Gary Shaw Productions, Don King Productions and Thompson Boxing Promotions..

“I’m extremely excited about this fight being announced,” Alexander said. “The fans will finally get to see what I believe is going to be one of the best fights in boxing, the two best 140-pounders going head to head. Tim Bradley is considered No. 1 at 140 and I’m considered No. 2, but anybody that knows me will say that I don’t like being second best at anything. Come January 29, the whole world will know I am the best 140-pounder in boxing.”

Not surprisingly, Bradley sees it differently.

“Devon Alexander is a skilled southpaw that lacks championship fight experience,” Bradley said. “There has been so much talk in the past about me avoiding him but I have never passed the opportunity to beat any other former champions. Now the time has come to prove who the best junior welterweight in the world is and I hope that Devon is ready for the can of whoop ass I’ll be serving him on January 29th.”

Alexander, 23, had two career-defining wins in 2010: a scintillating eighth-round knockout via right uppercut of then-International Boxing Federation (IBF) champion Juan “Iron Twins” Urango on March 6, and, in his most recent defense on August 7, Alexander held back a strong challenge from Andriy Kotelnik to win a unanimous decision by identical scores of 116-112.

Alexander won his first title, the WBC super lightweight championship by stopping the former holder of that crown, Junior Witter when they met on August 1, 2009, in Southern California. (Ironically, it was Bradley who had vacated the WBC crown.)

Alexander has successfully emerged from behind the shadow of fighting most of his career out of the Cory Spinks camp. He has elusive defensive skills – no doubt picked up from his mentor – but has shown enough firepower to become a legitimate knockout threat.

One year later, in his second championship defense, Bradley unified the title by dominating then-WBO champion Kendall Holt. Bradley weathered a first-round knockdown, and showed his trademark heart and determination during the remainder of the match, to win by unanimous decision.

Bradley opted to keep the WBO junior welterweight title. He has successfully defended that title twice. In August 2009 he dominated former world champion Nate Campbell before an accidental clash of heads near the end of round three led to the fight later being ruled no contest when Campbell could not continue due to a nasty gash over his left eye.

Bradley followed that with a December 2009 schooling of undefeated interim WBO champion Lamont Peterson, which included a third-round knockdown, the first time Peterson had ever hit the canvas in his 27-bout professional career.

With no worthy contenders available to defend his title against, Bradley moved up to 147 pounds and won a 12-round unanimous decision over undefeated Top-10 welterweight contender Carlos Abregu on July 17.

“If Alexander vs. Bradley doesn’t get your heart pumping then you aren’t alive,” said Bradley co-promoter Gary Shaw. “This isn’t just a title unification fight, this is for the whole ball of wax — the class of the junior welterweight division colliding head-on to determine the world champion. One thing I admire about both these men. When a challenge is made, they don’t make excuses, they make fights.”

“This fight has been long awaited by boxing fans since in fact it’s a battle between the best junior welterweights on the planet,” Thompson said. “Two undefeated fighters will decide the future of the division and what better neutral ground than the Motor City – Detroit. I have known Tim Bradley since he laced gloves for the first time as a professional, and he has never stopped amazing me with his talent and charisma inside the ring. Alexander will have his hands full on a great Motown boxing night.”

Alexander promoter Don King is excited to see his young world champion entering the biggest match of his career.

“I have promoted Devon Alexander’s entire professional career, and I couldn’t be prouder of this fine young man,” King said. “He’s a model citizen in St. Louis and the world’s treasure as a fighter. Devon and Timmy are two of the best American fighters we have, and, most important, they are two of the best people we have in the sport. Boxing fans and the sport will be the winners for this world championship unification.”

“We believe Alexander vs. Bradley is a spectacular way to launch a new season of boxing on HBO,” said Kery Davis, senior vice president of programming, HBO Sports. “Fight fans have the date circled on their calendars and sports fans everywhere should do the same.”