LOS ANGELES, CA (May 25, 2009) World ranked contender Abner Mares has joined forces with The Espinoza Boxing Club, it was announced today by award winning manager Frank Espinoza. The 23 year old Mares, promoted throughout his career by Oscar De La Hoya’s Golden Boy Promotions, is currently world ranked #4 by the IBF and WBO. He has compiled an undefeated record of 18-0 with 11 knockouts since turning professional four years ago after an illustrious amateur career which culminated in being a member of the 2004 Mexican Olympic Team.. 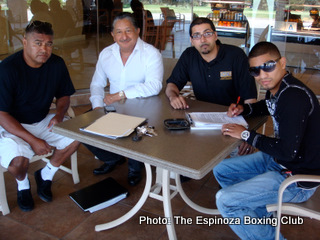 Mares won the WBO NABO title with an HBO televised unanimous decision win over Damian Marchiano in Atlantic City, New Jersey on November 17, 2007. He followed that with a devastating second round knockout of Diosdado Gabi on the televised portion of the HBO PPV broadcast of the Manny Pacquiao/Juan Manuel Marquez world title bout on March 15, 2008.

Mares made his return from a detached retina injury after an almost one year layoff by stopping Jonathan Perez in the sixth round at the MGM Grand in Las Vegas on May 2nd.

“I’m thrilled to begin working with Frank Espinoza as my manager. His work with world champions such as Israel Vazquez and Martin Castillo speaks volumes. I’m confident that having him guiding my career will be a huge advantage as I make my way to a world title bout” said the Nacho Beristain trained Mares.

“The 118 pound division is very hot right now and I’m looking forward to facing the very best, whether it is Fernando Montiel, Joseph Agbeko or Vic Darchinyan who’s moving up to 118.”

Mares is tentatively scheduled to return to action on July 18th on the undercard of the Floyd Mayweather Jr. /Juan Manuel Marquez event at the MGM Grand in Las Vegas .

Said Espinoza, “Abner is just the kind of fighter I want to work with. Just like Israel and Martin, he’s very serious and disciplined in his quest to become a world champion. He’s a great addition to The Espinoza Boxing Club and we’re very proud to work with him.”

Espinoza, born and bred in East Los Angeles, was a huge fan of the sport and eventually went on to establish himself as one of the top managers in the world of boxing.

Espinoza’s management style has earned him numerous accolades from several respected print and internet boxing writers. In the September 2008 issue of Ring Magazine, Espinoza was praised for his outstanding handling of the career of junior featherweight world champion and “Pound for Pound” superstar Israel “EL MAGNIFICO” Vazquez.

Among the world champions Espinoza has managed in the past are Martin “Gallito” Castillo, Enrique Sanchez, Isidro “ Chino ” Garcia and “Mighty” Mike Anchondo.

It is the goal of the Espinoza Boxing Club to always fight for our fighter’s best interests and to maximize their potential.