Timothy Bradley vs Kendall Holt on April 4 in Montreal 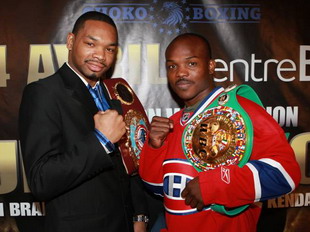 Bradley (23W-0L) is the only champion of the division to stand undefeated. Holt (25W-2L) has made a name for himself by taking out the undefeated.

In 2008, both men rocked the boxing world and became superstars: Bradley orchestrated one of the biggest upsets of the year by traveling to hostile territory (Nottingham, UK) and defeating the ex-champion, Junior Witter, against all odds to conquer the World Boxing Council Championship Belt. Holt delivered one of The Ring Magazine’s knockouts of the year in a wild 61-second bout with Ricardo Torres to become Champion of the World Boxing Organization..

Both champions are on a fast track to glory. On April 4th, only one will walk away with the belts, setting the stage for a potential showdown with the winner of the Manny Pacquiao and Ricky Hatton May 2nd fight.

This outstanding gala will also feature the return of Golden Boy Promotions star Librado Andrade (27W-2L), Montreal’s adopted son! One man stands between Andrade and his due rematch against Lucian Bute: VITALI TSYPKO (22W-2L), the “Pride of Ukraine.” Both men come out of closely debated bouts: Andrade’s fight against Bute in October 2008, and Tsypko’s bout against Jeff Lacy on HBO television. This time, only one man will get a shot at the IBF Super middleweight belt, to settle all doubts once and for all.

On April 4th, don’t miss the most important international boxing event presented in Montreal since the historical Duran-Leonard showdown, at the Olympic stadium in 1980!

The fight is to air in the US on Showtime Networks (live at 9 p.m. ET)