NEW TOWN, N.D. (April 29, 2006) – Brothers Lamont and Anthony Peterson (photo by Tom Casino) did not allow the spotlight of national television spoil their coming out party. The pair kept their undefeated records intact with dominant victories Friday on the SHOWTIME boxing series, “ShoBox: The New Generation.” 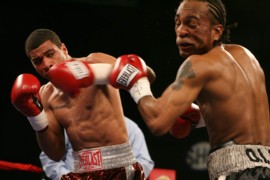 In the main event from the 4 Bears Casino in New Town, N.D., older brother, Lamont, recorded a 10-round unanimous decision over Mario Jose Ramos, while Anthony stopped his fifth consecutive opponent by scoring a third-round TKO over previously unbeaten Jermaine White in the co-feature. The bouts represented the 12th time that the Petersons have appeared on the same fight card. SHOWTIME televised the Brian Young’s Prizefight Boxing doubleheader at 11 p.m. ET/PT. The telecast represented the 75th in the popular “ShoBox” series, which debuted on SHOWTIME in July 2001.

Lamont Peterson (17-0, seven KOs), of Washington, D.C., consistently landed the left jab and pitched a shutout on two of the judges scorecards (100-90). The other judge scored it 99-93. Despite recording his fifth decision victory in six fights, the perfectionist was not pleased with his performance.

“It was not pretty, but it was a tactical win,” Lamont said. “I frustrated myself. White was easy to hit with the jab, but he covered up well when I went to the body.”

“Lamont is a skilled fighter, but Ramos’ style did not allow Peterson to do as well as he would have like to. In the second half, Peterson did to Ramos what I thought Ramos would do to Peterson.”

Peterson made it to the finals at the 2004 United States Olympic Trials before losing to the eventual U.S. representative at 132 pounds. In a classy move, Peterson had elected to vacate his spot at 132 and move up to 141, freeing up a slot for his younger brother on the Olympic team. After Lamont lost a disputed decision to Rock Allen, the five-time national Golden Gloves champion became an alternate.

Ramos (16-3-1, three KOs), of Phoenix, Ariz., appeared to frustrate Lamont with his southpaw style, but was unable to score often enough to prevent his second consecutive defeat. Inactive between October 2002 and July 2005, Ramos has gone 4-2 since resuming his career. In his biggest pro win, Ramos registered a 1-round unanimous decision over world ranked Cosme Rivera on Oct. 28, 2005.

Anthony Peterson (17-0, 14 KOs), of Washington, D.C., scored two knockdowns and manhandled White throughout. Following a barrage of punches midway through the first round, Peterson sent his opponent to one knee. In the second, Peterson recorded his second knockdown when referee Mark Nelson gave White a standing-eight count. Nelson then stopped the contest after the third round.

“White was getting beaten pretty badly,” Nelson said. “He was taking hard punches and showed distress. He told me that he was too tired when I went over after the third round.”

Anthony Peterson, who is the World Boxing Council (WBC) No. 23 lightweight contender, was unfazed by White’s aggressiveness.

“I am a dog,” Peterson said. “There are killers out there everyday. I know White was undefeated, but he did not show me anything. He came out strong, but had nothing on his punches. I threw a lot of bombs in the first round and I knew I could take him out in three or four rounds.

White (13-1, seven KOs), of Gary, Ind., lost for the first time since turning pro in February 2004. The Indiana native came out firing, but was unable to slow Anthony Peterson’s punishing left hook.

“ShoBox: The New Generation,” which debuted on SHOWTIME in July 2001, features up-and-coming prospects determined to make a mark and eventually fight for a chance at a world title. A number of fighters who have appeared on the series have gone on to become world champions, including Jeff Lacy, Ricky Hatton, Juan Diaz, Leonard Dorin, Joan Guzman and Scott Harrison.

Nick Charles called Friday’s action from ringside, with Farhood serving as expert analyst. The executive producer of the telecast was Gordon Hall, with Richard Gaughan producing.