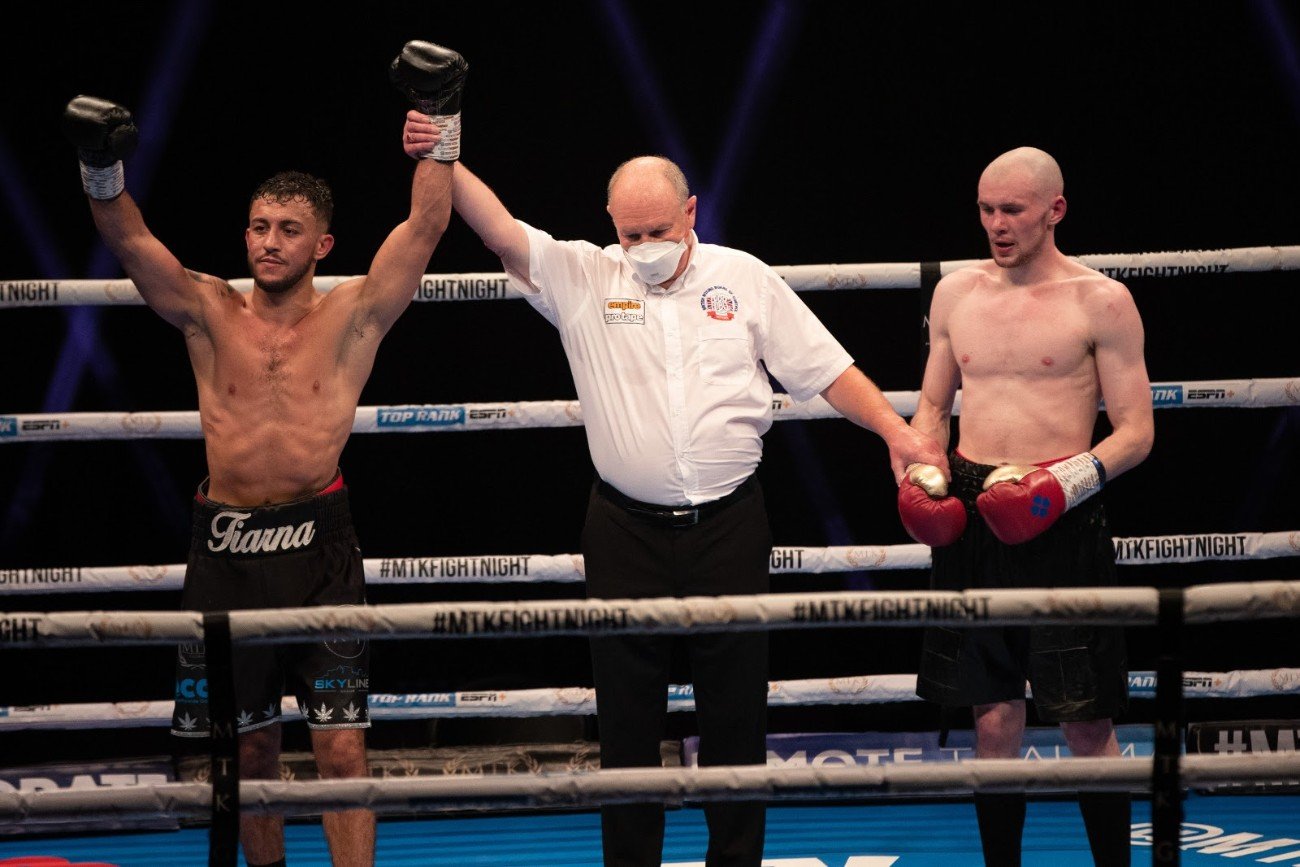 The show from Production Park Studios in Wakefield was broadcast live in the US on ESPN+ in association with Top Rank, and worldwide on IFL TV, and saw McKinson drop Harkin multiple times on his way to a decision win, while Harris had a fantastic battle with Marcel Braithwaite on his way to decision win too.

Elsewhere on the bill, there was a dominant victory for Paul Butler over Ryan Walker, and Paul McCullagh won his professional debut with a stoppage victory over Ben Thomas.

Free to use images from the event are available HERE (Please credit MTK Global), and full results and quotes are listed below:

Michael McKinson produced yet another masterclass as he dominated Martin Harkin throughout all 1o rounds of their welterweight battle.

It was a fast start from McKinson (19-0, 2 KOs), as he dropped Harkin (13-1, 5 KOs) in round one before following that up with another knockdown in round two.

Harkin couldn’t cope with the constant pressure he was being put under, with McKinson securing another big knockdown in round five. Harkin managed to last the distance, with the judges scoring it to give McKinson a dominant win.

McKinson said: “I feel great to get the win. I’ve been out for nearly a year, and I was a bit rusty in there. I could have jumped in more when I made him miss, but he’s a dangerous guy.

“He was an unbeaten fighter, but that’s what I do for a living; I take the 0’s on their records for fun. Granted, he isn’t the likes of Chris Kongo and Josh Kelly. I believe I can compete with those guys, and that’s who I want next.

“I’ve been in the top 10 for three or four years now; I’m beating these guys with ease; one of those judges scored that 100-88. That’s a landslide. Harkin might not be a big name, but he’s more dangerous than half of those guys.

“I believe I’m the best welterweight in the UK, and I deserve to box one of those big names. These fighters can’t ignore me forever. I’m the most real of them all, and I really want the big names.”

It was a superb battle between Jay Harris and Marcel Braithwaite, with Harris earning the unanimous decision victory after an extremely entertaining 10 rounds.

Harris (18-1, 9 KOs) dictated the early proceedings, but things took a dramatic turn in round four when Braithwaite (9-3) rocked the Welshman with a massive left hook.

Harris managed to weather the storm, with the back and forth action continuing throughout the remainder of the fight. It went the distance, with the three judges scoring 98-92, 97-93, 98-93 to Harris, after a tremendous showing from both men.

Harris said: “It’s good to fight like that. I don’t think I boxed 100%. I was a bit sluggish and got caught with a lot. I got punished at times, and credit to Marcel. He was as game as they came and gave me a good fight.

“In round four, it was was a good shot he caught me with, and I felt it. It buzzed me, but I managed to recover and see the round out. It was my first fight back after eight months, and it was a whole new experience for me.

“Credit to Marcel. He did an excellent job, but I know that I have to perform better than that if I want to mix it at world level.”

Former world champion Paul Butler remained in contention for another world title shot as he defeated Ryan Walker on points after eight rounds.

Walker tried his best to make it competitive, but in the end, Butler proved to be too good, with the referee scoring it 79-73 in favor of the Ellesmere Port man to hand him the win.

Butler said: “It was nice to be out there against a tough opponent in Ryan. I caught him a few times to the body. We were working a lot on the right-hand side as he seemed to tuck up that way, then we tried going round to his left-hand side, and it worked and opened up a few gaps for me.

“I’ve had eight good rounds there, and we’ll see what happens now. I’m number three in the IBF rankings, and I made championship weight to push me up to the number 2 spot, which is vacant.

Paul McCullagh made a perfect start to life in the professional ranks as he earned a third-round stoppage victory over Ben Thomas.

It was a highly-anticipated debut for 20-year-old McCullagh (1-0, 1 KO), and he proved that the hype was real, unleashing a constant onslaught on his opponent that Thomas (2-4-3, 1 KO) struggled to cope with.

It led to a knockdown in round three. While Thomas managed to get back to his feet, McCullagh continued the barrage and earned another knockdown, with Thomas unable to recover, handing Irish star McCullagh the stoppage win.