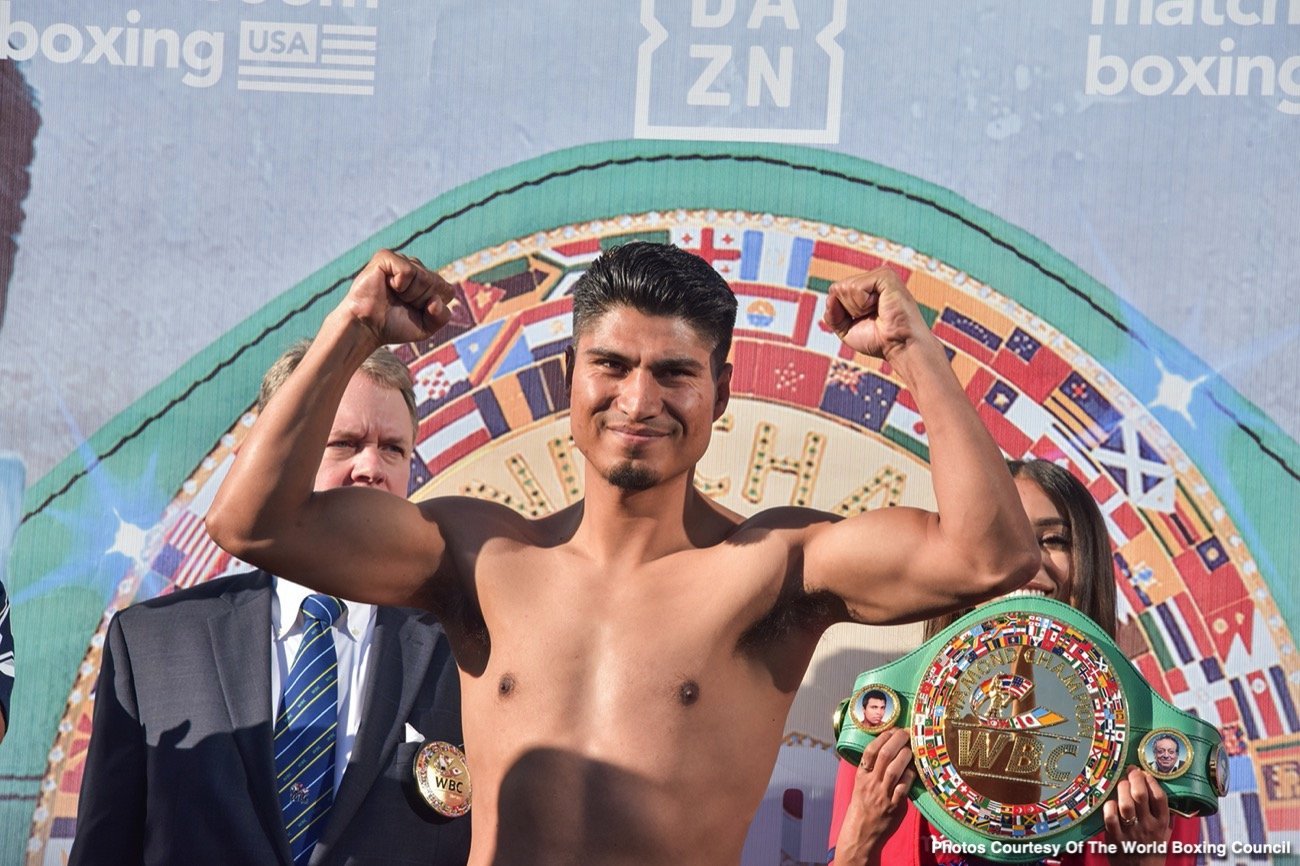 Former 4 division world champion Mikey Garcia (39-1, 30 KOs) isn’t troubled with being the much smaller fighter than Jessie Vargas (29-2-2, 11 KO) tonight in their fight at The Star in Frisco, Texas. DAZN will be streaming the fight, as well as the fantastic undercard. There’s some really interesting fights involving these fighters:

This fight for Mikey is for him to prove he’s a top contender in the welterweight division. The problem is Mikey’s opponent Vargas ISN’T a top contender in the 147-lb weight class. Years ago, Vargas held the WBO title for a short period of time before he was beaten by Manny Pacquiao in 2016. Vargas’ career has dissolved into mediocrity ever since.

He’s tried and failed to beat contenders at 147, and in his last fight, he didn’t look so great beating 38-year-old lightweight Humberto Soto in April 2019. That’s the last time Vargas fought, and he’s not ranked at 147.  So, Mikey’s belief that he’ll prove he’s a top contender at welterweight by beating Vargas is a faulty one. If this was 2016, Mikey would prove he’s a top welterweight, but not in 2020. Vargas’ career has imploded, and he’s no longer a contender.

Garcia blames loss to Spence on his body not responding

“When I look back there were a lot of things I could have done better obviously, and that’s what you gain from a loss and an experience. You’ve got to learn from that,” said Mikey to DAZN. “I was fighting my own self, my own body. And I was weak, I was tired, and it really wasn’t me in that way.

“I can’t pinpoint really one thing. It was the weight increase, maybe I rehydrated too much, and felt tired too soon in the fight. But at the same time, Errol was fighting his A-game, his best fight, and was on point. Every single time, he was a faster, quicker and better fighter all around.

“It was very complicated for me to make adjustments when my body wouldn’t respond, and he was on top of his game. That’s why it was harder for me to do anything that night, and that’s why I wasn’t successful,” said Mikey.

It’s interesting that Mikey can’t just come out and tell it like it is when it comes to his loss to Errol Spence Jr. last year. The reason Mikey lost the fight is that he was too short, too fat and too weak to complete. Plus, Mikey had never fought at 147, and the experience he had at 140 was limited to Adrien Broner and Sergey Lipinets. Mikey looked poor in beating Lipinets.

Those are good basic fighters, but not considered to be among the best in that weight class. The top guys at 140 are Regis Prograis, Josh Taylor and Jose Ramirez. Could Mikey beat any of those fighters? It’s extremely doubtful.

“They talked about me making my night fight at 140 preferably, and I actually did look at some names at 140, but the names that we kind of reached out to weren’t available for this month and this date,” said Mikey. “The second option was to answer all of those questions and all those doubts people have whether I can fight at 147 or not.

“When we mentioned different opponents, they brought up Jessie. It’s a good fight. I accepted the fight and told my dad and my brother about it,” Garcia said. “It’s already a done deal. ‘Okay, what happened to 140?’ The names were not available. Plus, I get the opportunity to show everybody there’s a lot more to Mikey Garcia at welterweight that was not seen in the last fight.

“So I think this is that opportunity to show everybody I can be a top contender at welterweight against a solid fighter, who is a former world champion a welterweight, who is big and strong like everybody else, and that’s why I decided to take this fight,” said Mikey. I don’t really care so much about the opinions of others, because I know what really happened, and what I’m capable of doing,” said Mikey.

The only thing Mikey will prove in beating Vargas tonight is he was able to defeat a fighter that was one short period of time one of the many top fighters at 147. After Vargas’ one-sided loss to Manny Pacquiao in 2016, he disappeared for a year, and since then his career has suffered.

These are Vargas’s fight since his loss to Pacquiao in 2016:

Vargas hasn’t accomplished much in the last 4 years of his career, and not surprisingly he’s no longer ranked in the top 15 at welterweight.

Vargas will try and use his size early

“I think he will try early on to try and use his size,” Mikey said about Vargas’ likely tactics. “He’s such a bigger guy, but once he finds out that it’s not that easy, and that I’m smarter, quicker and better defense. I’m an overall better fighter. He’s going to try and box me, and use his height and reach against me.

“He’ll try to give me more challenges by using his height, reach and try and stay on the outside and try and make it difficult for me to get close to him,” Mikey said. “I’m ready to do whatever it takes to win this fight. I expect Jessie to come at his very best. And I know he’s fully prepared. I know he’s a warrior, and he always comes to win,” said Garcia.

Vargas will try and use his size not only early against Mikey but ALL the time. He’s not going to fight small so that he can give Mikey a handicap, because that’s not his style. Vargas will do what he did against the 5’7″ Soto by bringing the heat, and overpowering the 5’6″ Mikey, who is even smaller than Soto.

Mikey: knocking out Vargas will be adding a cherry on the top

“So I expect a good fight from Jessie, but I know I’m a better fighter,” Garcia said. “I’m not looking for a knockout, but if I were to hurt him in any of the rounds, then I’m definitely going to take advantage. That would be me adding that cherry on the top to seal the victory.

“I think people would really consider me a solid welterweight at that point, but that’s not what I need to accomplish that,” Mikey said. “I think a solid performance in going 12 rounds but I win decisively and easily, that would be enough for everyone to take me seriously.

“I’ve always said that I would have liked to have fought Floyd just because he’s the best that I’ve seen, and I was able to share the ring with the best, that would mean a lot more,” Garcia said. “I was able to spar Manny years ago for one of the camps, and he was bad a—. Because I was already in the ring with him a little bit, it kind of makes me want to get in with Floyd more,” said Mikey Garcia.

Knocking out Vargas won’t be easy for Mikey to do considering that he’s got a good chin. The only two defeats that Vargas has during his career have come in decision losses to Tim Bradley and Manny Pacquiao. If those two weren’t able to KO Vargas, then it’s unlikely Mikey will.

Mikey might win, but the only thing it’ll prove is that he’s better than a faded Vargas, who clearly is on the downside. Vargas’ promoter Eddie Hearn speaks of him fighting at 154 after this, but that would be a bad idea. If  Vargas can’t beat fringe level welterweights like Broner and Dulorme, then he stands no shot at beating 154-lb champions Jermell Charlo, Jeison Rosario or Patrick Teixeira.