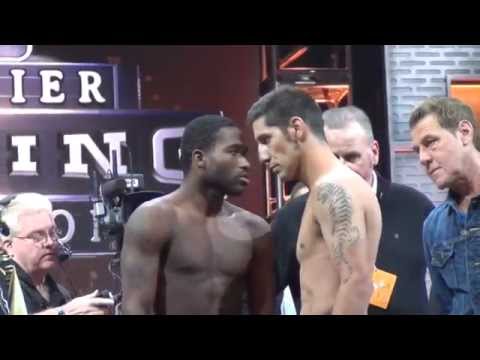 Tonight, for the first time in nearly 30 years, Boxing will return to non-subscription based television as NBC is set to air the “Premiere Boxing Champions” series. During its well documented absence, those in and around the sport have pushed for this effort. What was once a wish is now a reality, and what that reality means for two men at the center of this spectacle could be very intriguing after the final bells.

As they glow in the spoils of new stardom, both find themselves in the midst of one of the most compelling subplots known in the history of the sport. Which is that rare moment when a young talent sits center stage with an opportunity to permanently etch their names in the minds of millions as a perennial player in the Boxing landscape.

Puerto Rico’s Miguel Cotto seized this same epic moment back in 2007 against veteran Shane Mosley in New York City’s Madison Square Garden. A hard fault victory on a world stage against a top tier talent that many felt he would not defeat catapulted him to heights only enjoyed today by the likes of Floyd Mayweather and Manny Pacquiao.

The unfortunate side of this journey is that not everyone finds success. What makes the Adrien Broner story intriguing is that although he remains in contention to be a key player of tomorrow, tonight’s bout is actually a shot at redemption, as not too long ago he had this ‘moment of proof’, but was severely humbled in an effort that left him borderline suicidal. After much contemplation, Broner found himself back in the winning column with a string of impressive victories, but the question beckons: has he really come full circle by dedicating himself in a way that will eventually take him to the top?

Some have began to openly question that effort after he failed to make weight leading up to this fight. A harsh reality that re-opens a box full of questions surrounding his dedication to craft and willingness to do what’s necessary to reach the next level. As we look back over the history of the sport, few have ever maintained great success while entrenched in a lifestyle with limited discipline. And those who have defied those odds temporarily have rarely enjoyed that success for very long.

Broner will have the chance tonight to defeat a very solid opponent in John Molina Jr. This bout may not represent the elite echelon of the welterweight class, but it will certainly tell us whether or not he is ready to face the men who are.

In the case of Keith Thurman, tonight’s mission could be a bit more difficult. This isn’t to say Broner’s will be easy, but it is to say Thurman has a very tall mountain to scale. Robert Guerrero is a veteran who has proven his mettle time and time again in the sport, and despite the limited respect given, he remains one of the more intricate pieces in the welterweight landscape. In Thurman’s last bout, he found a way to overcome a very difficult style, but it was rendered by a man who was vertically challenged, and stylistically impaired. Such won’t be the case tonight.

A year ago, Thurman was asked directly, what would be his answer to the opponent who had the stamina to outwork him, and the durability to outlast him? He responded in saying that while he’s a fan of the KO, he also has underrated skills that he would gladly exhibit if he needed to secure a victory. That statement would never be tested in his young career as much as it will be tonight. Guerrero is as tough as nails and knows all of the tricks in the books.

Heavyweight Evander Holyfield showed us many times that winning in boxing is more a matter of a better mind than a matter of bigger muscles. And Guerrero has proven that his ability to perform like a seasoned veteran is far more credible than than the prowess of a power puncher with limited experience. This reality sets the stage perfectly for Thurman to elevate himself to new heights, as no one in the past has ever stopped the rugged Guerrero.

Broner has been down, and is attempting to rise again. Thurman has continued to rise while knocking many down in the process. They won’t step in the ring to face one another, but the illuminating thought of seeing them share airspace one special night in the future all starts, and potentially ends when they step in the ring in two separate missions tonight. Questions raised will be questions answered…..or in an unfortunate twist, questions answered could produce more questions raised. Tonight, we’ll find out, on NBC, courtesy of the “Premiere Boxing Champions”. Check your local listing for showtimes.

(Vivek “Vito” Wallace can be heard every Tuesday night on “Left-Hook Lounge Radio”. He can also be reached at wallace@boxing247.com, Twitter (@lefthooklounge1), and Facebook).