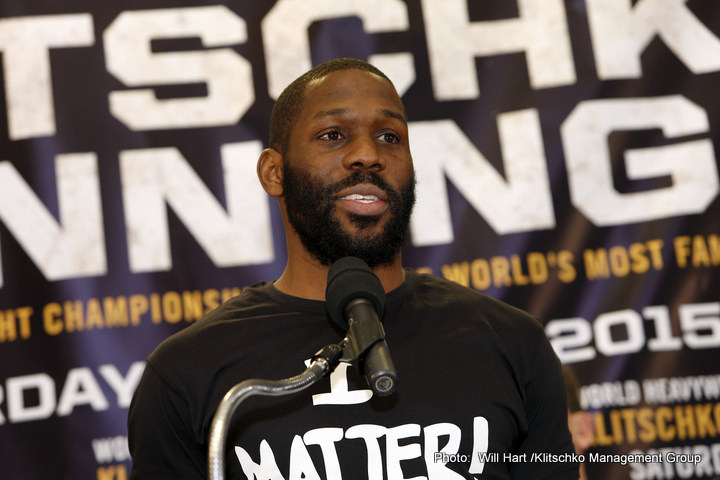 For it has been in that short space of time, that the 30-year old Philadelphian has managed to travel from first lacing them up to having the opportunity to claim the most prestigious prize in the sport.

Regardless of era, such a remarkable feat is deserving of respect.

Jennings is an impressive character, relaxed, well spoken and precise in both his words and boxing. A man who has shown steady improvement throughout his short professional career, particularly in his last two bouts when halting previously unbeaten Pole Artur Szpilka in the last round of 10 and outpointing Cuban Mike Perez over 12.

But, does Jennings have enough to trouble the giant Ukrainian, who on the night will outweigh him by almost 2st and tower 3in above him?

The Philly native certainly thinks so, reliably informing anyone who would listen at the 4th February press conference that he is under no illusions about the task which faces him, but that he brings the will, the heart and the athleticism to succeed where so many others have failed.

Boldly claiming that he is ready for the transition to World champion.

It’s hard to disbelieve Jennings when you listen to him talk; such is his likability and general logic. However, one look at the Klitschko resume and any heightened levels of optimism are quickly extinguished.

When analysed the fight starts to take on a look of many previous heavyweight bouts involving the dominant unified champion. The shear size advantages, coupled with his superior technique looks to be too much for Jennings whose athleticism could allow him to see the final bell, but it’s hard to see him have significant success or forcing the knockout he has talked about.

That is of course a realistic point of view, but it’s key to remember that this is a Philadelphian who only pulled the gloves on 6 years ago that is now challenging for WBA/IBF/WBO/IBO heavyweight titles. This is after all heavyweight boxing and Bryant Jennings has improved in every outing, he will be convinced that if he can get to Klitschko he can benefit where Purrity, Sanders and Brewster have before him.

Sadly for the American, those defeats are long in the past and this may be a step too far too soon.

I believe Jennings has the talent and the charisma to become a World champion in time, but not yet.