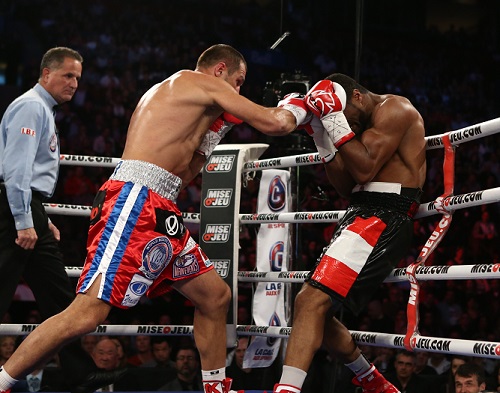 (Photo Credits: David Spagnolo/Main Events) Jean Pascal (29-3-1, 17 KOs) gave it a game effort tonight, but he just wasn’t able to handle WBA/WBO/IBF light heavyweight Sergey Kovalev’s power, as Kovalev dropped Pascal twice in the process of halting him in the 8th round in their fight on Saturday night on HBO Championship Boxing from the Bell Centre in Montreal, Canada.

Pascal visited the canvas in the 4th and the 8th rounds. Referee Luis Pabon pulled the plug in the 8th shortly after Pascal was dropped with a left hook by Kovalev. Pascal sprang to his feet, staggered to the ropes for a last stand. Kovalev then nailed the near defenseless Pascal with two hard right hands to the head that had Pascal’s eyes rolling around in his head. The fight was stopped at 1:03 of the round. Not surprisingly, Pascal protested the stoppage, even while staggering around.

With the crowd giving him encouragement, Pascal was able to rally in the 5th and 6th rounds after being out on his feet in the 4th. It was a situation where the crowd applause enabled Pascal to survive in a fight where he really should have been finished off in the 5th. However, even the crowd couldn’t save Pascal in the 7th when Kovalev changed tactics and began using his jab to nail Pascal at will from the outside. Pascal tried again and again to land a big shot from the outside, as he swung and missed repeatedly. But Kovalev was able to easily lean away from Pascal’s shots to make them miss. Near the end of the round, Kovalev clipped Pascal with a big left hook to the head that had Pascal out on his feet as the round ended. It was clear that Pascal was not going to be able to survive the next round like he’d done earlier in the fight after getting hurt in the 4th.

At the start of the 8th, Kovalev pounced on Pascal, nailing him at will with shots to the head until knocking him down into the ropes with a left hook. The shot had Pascal half sitting on the ropes. Kovalev slipped on the canvas during the exchange, and Pascal tried make the referee think he’d knocked Kovalev down. But the referee wasn’t buying it, especially after watching Pascal stagger across the ring.

Undefeated #2 IBF heavyweight contender Vyacheslav Glazkov (20-0-1, 12 KOs) won a 12 round unanimous decision victory over #4 IBF Steve Cunningham (28-7, 13 KOs). Glazkov did not look good in the fight, and he reminded me of a poor version of Alexander Povetkin. Cunningham was even worse, so it was a situation where the judges had to pick the guy who looked a little better. It was still close though, because both of these guys were very, very average tonight. The judges scored it 116-112, 115-113 and 116-112. I had the fight pretty much a draw. Cunningham won most of the first six rounds, while Glazkov took many of the last six rounds. You can even make an argument that Cunningham could have been given the nod. It was a fight that really could have gone either way.

With the win, Glazkov is now the IBF mandatory challenger for IBF heavyweight champion Wladimir Klitschko. I can’t see that going too well for Glazkov. He’s too short, too slow and too weak to compete against Wladimir.