Sunny Edwards retained his IBF world flyweight title and then immediately turned his attention to unifying the division. 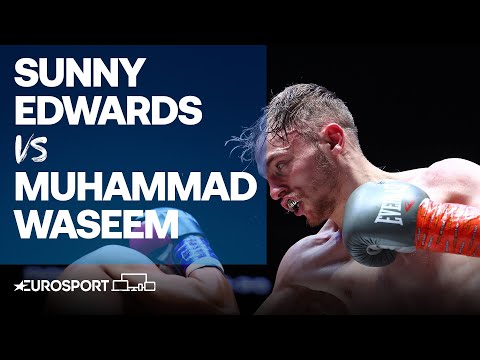 Waseem, who was bidding to become his country’s first ever professional world champion, tried to make the fight a war of attrition but he was deducted points in rounds six and seven, which harmed his title tilt.

Edwards described his opponent as “world class” but felt that he was a clear winner at Probellum Evolution and, after the victory, repeated his desire to face Mexican Julio Cesar Martinez, the WBC champion next in the biggest fight that can be made in the 115lbs division.

“Muhammad is a world class operator and he and his team came with a good game plan,” said Edwards, who is now 18-0.

“There was a lot on the line tonight but I didn’t want to just run, run, run, I wanted to mix it up and I felt I won comfortably in the end.

“I now want the Ring Magazine belt and the WBC title and I know Martinez wants the fight so let’s make it happen, it will be huge.”

Waseem, who’s record now reads 12-2, accepted that Edwards deserved to keep hold of his IBF belt but he was unhappy with the referee for taking points off him.

“Congratulations to Sunny tonight, he was the better man,” said Waseem.

“I felt it was very unfair of the referee to take points off me, I don’t know why he did it – this is a fight!”

Peter McGrail bamboozled and beat up Alexandru Ionita to reinforce his reputation as one of boxing’s hottest prospects.

McGrail forced his Romania rival to quit at the end of the second round at Probellum Evolution in Dubai tonight having overwhelmed him with a level of punch variety he had not encountered before.

Liverpool’s McGrail was an outstanding amateur and won medals at the European Championships, Commonwealth Games and World Amateur Championships, but he has made a flawless start to life as a professional and this win takes him to 3-0.

The 25-year-old drew blood from the nose of his opponent in round two as he turned on the style for the fans in the Middle East and after the beleaguered Ionita slumped on his chair, it was decided he felt the force of McGrail’s punches for long enough.

McGrail is next scheduled to fight in Liverpool, on April 22 as part of a massive bill which is headlined by Paul Butler’s world title fight with John Riel Casimero, and he wants a step up in rounds and class of opponent.

“I’m looking for an eight round fight next and I want a tougher opponent too,” said super-bantamweight McGrail.

“But I trust my team at Probellum and Richard Schaefer to deliver me the right fights at the right time,

Doheny, 35, was sharp and accurate from the first bell and floored Juarez with a wonderfully timed left hook from the southpaw stance.

Juarez got to his feet but Doheny pounced and having connected with several more clean shots, the referee stepped in between the fighters and brought an end to the scheduled 10 rounder at 2:23 of the second session.

Doheny, who is now 23-3 as a pro, was thrilled with his performance.

“It feels great and I am very happy to be getting the stoppage, “ Doheny, nicknamed ‘The Power’, said.

“I felt every shot I hit him with, not just the left hook that floored him, and I knew I was breaking him down.

Probellum star Shabaz Masound, who stopped Yoann Boyeux on the opening night of Probellum Evolution, said he would relish a crack at Doheny.

“I would love that fight him, he’s a former world champion and I would fancy my chances,” said the 10-0 man from Stoke-on-Trent.

Hovhannes Bachkov forced the referee to step in and spare Cristian Coria further punishment after pummelling his Argentinian rival in Dubai tonight.

The dark horse of the super-lightweight division mauled Coria for seven rounds before the official waved it off near the end of the next session, deciding the 39-year-old had taken too many shots.

Bachkov, who sustained a relentless pace and threw an incredibly high volume of punches, now moves to 3-0 as a professional and with Probellum’s backing, the Armenian plans to be in world title contention in double-quick time.

The 29-year-old, an Olympic bronze medallist, cuts a menacing figure and in becoming only the second man to stop the experienced and tough Coria, he sent a warning shot to the super lightweight division.

Bachkov targeted the right hand side of Coria’s body throughout, hammering the 39-year-old with sickening left hooks, and though he has exceptional amateur credentials, his come-forward style looks tailor made for the pros.

“I planned that and tonight I did my job effectively and quickly,” said the outstanding Armenian.

Britain’s Khalid Ayub extended his perfect start to life in the pros with an impressive win over Annem Sivareddy of India.

The UK’s Ayub was trying to force the stoppage in a dominant display but had to contend with a points win, which moves him to 3-0 as a pro.

In the opening bout of the evening, Fahad Al Bloushi of the UAE moved to 8-1 as a professional with a points win over Mohamed Kashinde of Tanzania.

India’s Faizan Anwar saw off the challenge of Khojiakbar Qodirokhunov over eight rounds at the Dubai Duty Free Tennis Stadium, winning 80-72, 78-74 and 80-72 on the scorecards.

Lightweight Bader Samreen dropped Denis Bartos twice in the fourth round of their contest to score an impressive stoppage win.

The referee waved the contest off at 1:47 of the session after Samreen sent his Czech rival to the floor with a crunching uppercut.

Dubai-based Brit Jamie King sent Naveen Verma to the floor with a heavy left hand in the third round of their cruiserweight bout, but had to settle for a points win after four rounds. King moves to 3-0 as a pro.