WBO INTERNATIONAL SUPER middleweight champion Zach Parker and his promoter Frank Warren and manager Neil Marsh convened at the BT Sport Studios for the opening press conference ahead of his challenge for the WBO Interim world title against the unbeaten two-weight world champion Demetrius Andrade on May 21.

Pride Park Stadium, the home of Derby County Football Club, will host the spectacular event. Andrade, awaiting a passport renewal, joined proceedings over Zoom, and below is a selection of key quotes from the media gathering. 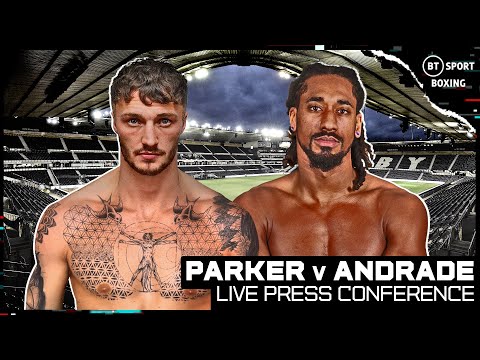 “On a number of fronts, it was essential to win the purse bid for this fight. It is for the Interim title, so for the winner, there is Canelo – who is the current champion – fighting next at light heavyweight. Is he going to stay at that weight where the winner of this will get a shot at him because the mandatory will be due? If he gives up the title, the winner of this Interim title will be installed as the champion.

“From the perspective of Zach, I was determined to win the purse bid and give him every opportunity I can because he is with us and is a joy to work with. He has been No.1 with the WBO for quite a while now and is only 27 years of age. He is not only fighting in his hometown; he is fighting at Pride Park, home of his local football club. The reason we are putting it on there is that I want the fans in Derby to get behind him, and I am a big believer in trying to get every advantage you can for your fighter.

“Demetrius is a two-weight, three-time world champion who is moving up to super middleweight, while I feel Zach is bordering on being a light heavyweight. He is very underestimated, in my opinion, as a boxer. We know he can punch, and I hope the advantages we have secured will translate to a win for him on the night against a real good quality fighter in Demetrius, who we all respect.”

“This is the biggest fight of my career, and I will take it with both hands. He is a two-weight world champion, but he is getting on a bit now, and I think it is my time because I am up and coming.

“I want to thank Frank Warren and all my team for getting behind me and getting this in Derby, especially at my football club at Pride Park. I am just looking forward to the fight now.

“I think everything is going in my favor. I am young, it is happening in my backyard, and the reaction from the crowd has been tremendous. It will favor me, and I will show it on fight night.

“He is coming up a weight, and I think I am too big and strong. You’ve seen in other fights that he’s been hurt. I won’t let up when I land, and I will get him out of there.”

“I can’t wait to get over to England, and I believe Frank Warren will do a great job getting the Derby fans and my fans as well into the stadium. It will be a great fight, and I can’t wait to showcase my skills and talent and put on an excellent performance.

“I am excited to be coming over because I am a world champ who has traveled worldwide and been in the lion’s den plenty of times. Who am I to say I am the best if I can’t go to someone’s backyard and give him an arse-whooping. That is just how it is. Anyone who lost a purse bid might have pulled out and gone a different route, but that is not me, and Zach will get the opportunity to have the biggest fight of his life.

“It is an excellent opportunity for him, for me, and the best will move on and forward. This is the fight game, so anyone I get in the ring with, I will lay hands on and bash up. I look at Zach as a young kid trying to make a name for himself, and he is going to bring his A-game and the best performance of his life against me.

“Hopefully, he brings out the best in me, and we have a great performance.”

“Zach and I have been together for six years now, and it has been tough getting here. He’d be a much bigger name now if the previous people had promoted him correctly, and 14-15 months ago, we were looking for a promoter who could take us to the top. We didn’t speak to any other advocate because it was Frank Warren who we wanted to lead us into this next chapter.

“You only need to look at Frank’s history to know why we signed with him. He honored his word and got us the development fights, and collectively as a team, we believe Zach is ready to go. We are not underestimating Demetrius, who is avoided in the US, and I think people could have done a better job for him, hence why he has entered into this agreement with Zach Parker.

“Boxing is about timing, and this kid here deserves every bit of spotlight he will get. The kid is a beast, and because people haven’t seen him on the big stage enough, there is a question mark over him. Let’s be honest, Demetrius’ passport has expired because he didn’t expect to be coming to England. No disrespect, but I think he has got greedy, and they are all thinking about Canelo’s money.

“He will come to Derby and meet Zach Parker, who is not Liam Williams or Brian Rose. This is a real ding-dong of a fight, and my man will come out on top.”

Tickets for Parker v Andrade start from £55 and are available exclusively from dcfc.co.uk, with £10 from every ticket sold to DCFC to help the club through the current financial hardship.

Secure your place to support Zach and the club on a not-to-be-missed night at the Pride Park Stadium!

A full undercard will be announced in due course.