Rewind to 1967, and Canada’s greatest heavyweight, certainly the country’s toughest fighter, was on a roll. Having achieved global fame and respect due to his 15 round battle with Muhammad Ali the previous year, Chuvalo was now on the hunt for a third crack at the heavyweight title (having lost a 15 round decision to Ernie Terrell in a WBA title fight in 1965). Chuvalo instead ran into a starving hungry contender named Joe Frazier.

At the time of the New York fight with Frazier, this in July of 1967, Chuvalo had wiped out six good fighters, all in a row – Chuvalo’s two KO wins over Willi Besmanoff being the highlight of this run of the good stuff. But Frazier, who was on fire as well as smokin,’ violently ended George’s run. And very nearly his career. 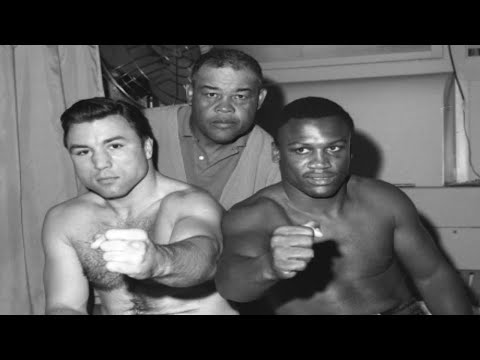 Fans of course know all about Chuvalo’s famed and celebrated chin – his rock of a head; the fact that he was never once knocked off his feet in almost 100 pro fights. It was against Frazier that Chuvalo was stopped (but not dropped) for the first time in his career; when Frazier’s lethal handiwork busted up Chuvalo’s eye up in gruesome fashion. After just four rounds with the rampaging Frazier, the eye was a slit, Chuvalo’s eyeball felling as though “it had been knocked out.” After the fight, the calls for Chuvalo to retire were, if not quite deafening, then certainly loud enough to interrupt a good night’s sleep. But Irv Ungerman, Chuvalo’s manager, lost no sleep; he instead got busy looking to book further fights for his most famous fighter.

And so George fought on. For over ten more years. Having taken all Muhammad Ali, Floyd Patterson, Zora Folley, Oscar Bonavena and others could land on him, George went on to take the hard hits of Jerry Quarry, George Foreman, Cleveland Williams and Ali again. Yet when he did call it a career, after a win that saw him leave the ring as Canadian champ once again, Chuvalo had all of his faculties.

Dabbling in acting (“The Fly” and a couple of other movies) George was then forced to accept his most honorable role: that of becoming a fierce and eloquently spoken anti-drug advocate. Chuvalo spoke to many thousands of young people in person and many more via social media, TV talks, and through his excellent autobiography.

But soon after, in the cruellest hand dealt to him, indeed, the most terrible dose of the bad stuff imaginable for someone who had already battled against so much, George was struck down by dementia. It’s tough to write about this. A genuine hero to millions, Chuvalo was for a long time looked at as an indestructible force, a super-human entity that had to and did fight all that came his way. Now, his cognitive skills deteriorating daily, Chuvalo has only a limited memory; only a foggy recall of his braver than brave fights.

George is still with us – having outlived Frazier, Ali, Quarry, Williams, Patterson, Spinks, Terrell, Cooper and so many others – but he’s not really. He is no longer the George Chuvalo we all love and celebrate. Instead, Chuvalo is a great former fighter, a great human being – but one who gave way, way, way too much than is at all fair. And he is unable to talk about it anymore.

But even if George Chuvalo cannot fully remember all that he did in his services to the toughest, most unforgiving sport of them all, we fans sure can.