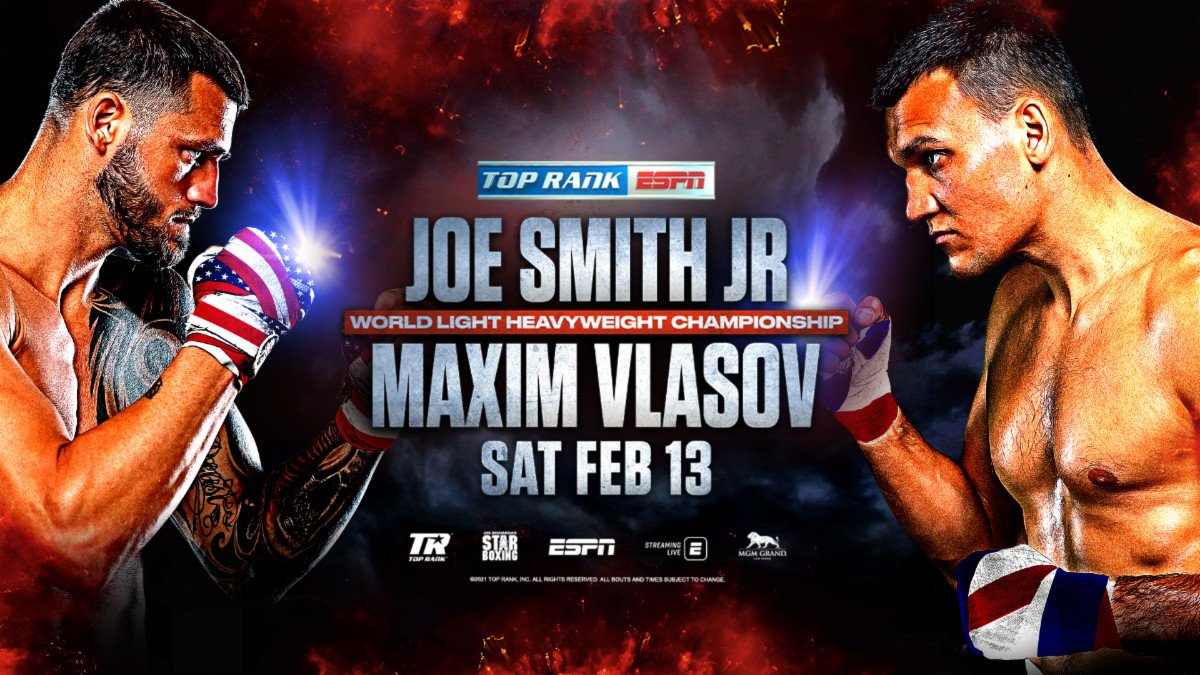 Vlasov said, “I am devastated with the postponement of my world title fight against Joe Smith Jr. I have been following strict protocols, I have done regular testing with negative results, and I have no symptoms. I am well prepared and had an excellent training camp. I look forward to the rescheduling of the fight and the opportunity to display my world class skills.”

The Richard Commey-Jackson Marinez lightweight bout has been elevated to the main event and will headline the ESPN-televised tripleheader beginning at 10 p.m. ET/7 p.m. PT. In the new co-feature, action star Adam Lopez will defend his NABF featherweight belt in a 10-rounder against former world title challenger Jason Sanchez. The ESPN telecast will open with Toledo heavyweight sensation Jared Anderson (7-0, 7 KOs) against Kingsley Ibeh in a six-rounder.

JOE “THE BEAST” SMITH JR. had a spectacular 2020, consecutively dominating two #1 world-rated light heavyweight challengers on ESPN in Jesse Hart and Eleider Alvarez nominated as the BWAA 2020 Fighter of the Year.

Incredibly, since Smith Jr.’s two impressive victories in 2020, not much has changed in terms of the current COVID world we are all faced with. Social distancing, masks, and testing still reign supreme, especially in the worldwide attempts in the sports world to trudge on through the pandemic. How does an elite athlete work around these conditions? This “Common Man,” who has become an elite beloved fighter, gets back to his roots.

“I just train because there is nothing else to do,” said Smith. “I can’t go to the movies, I can’t go bowling, so while I sit at home, there are no distractions, that’s for sure. As far as conditioning, I do a lot outside and at home.”

In an attempt to keep the circle small, Smith Jr. and trainer Jerry Capobianco are lucky enough to have a key to a local Long Island boxing gym where they can put in work as Smith Jr.’s thudding punches echo across the otherwise empty gym. “As far as sparring, my sparring partner and his coach come down and open their gym for us,” said Smith. “It is one on one, and no one else is around.” Most recently, Smith has continued sharpening his skills training with heavyweight Adam “Baby Face” Kownacki, UFC’s Randy Brown, as well as Star Boxing stalemate, super welterweight Wendy Toussaint.

As for the fight, Smith Jr. knows the work he is putting in will pay dividends fight night against Vlasov. “Anybody is a dangerous opponent, but I am confident that I am preparing the right way for a tough fight. I know Vlasov is a busy fighter, so that I will come into this fight in great shape.”

Promoted by Top Rank, in association with Joe DeGuardia’s Star Boxing, the Smith-Vlasov World Championship fight will be televised live on ESPN and ESPN Deportes on February 13 at 10 p.m. ET/7 p.m. PT.