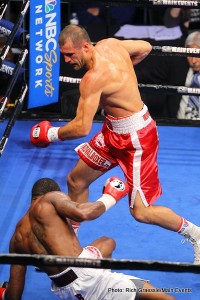 Bryant Jennings (17-0, 9 KO’s) did a good job of defeating a tough Andrey Fedosov (24-3, 19 KO’s) by a 6th round stoppage. The Russian Fedosov’s left eye was too swollen for him to come out for the 7th round. The fight was very competitive up to the point where it was stopped, though.

Fedosov definitely gave Jennings a lot of problems in the first two rounds, but then he seemed to tire and lose his energy after getting hurt by a left-fight combination in the 3rd round. Fedosov came back in the 4th to control the action, but Jennings pulled away in the 5th and 6th rounds to batter him with shots.

Jennings was clearly bothered by Fedsov’s body shots and he showed little ability to fight on the inside. Although Jennings won the fight, he definitely a blueprint to other fighters in how to beat him. Jennings doesn’t have a lot of power and once you’re past his jab, which isn’t that great, he’d virtually defenseless on the onside because his arms are too long for him to fight in close.