Last night in Montreal, Canada unbeaten heavyweight banger Arslanbek Makhmudov was given the toughest fight of his now 15-fight pro career. Facing experienced veteran Carlos Takam – really a fighter who is as durable as he is willing to fight just about anyone – the towering Russian was taken the distance for the very first time.

Makhmudov won via wide scores of 97-91 and 96-92 twice and he scored two knockdowns, but the winner who had previously wiped out everyone in his path did not have things his own way. Now 15-0(14), Makhmudov is far from the finished article, although last night’s fight will no doubt have done him some good. Takam, who is now 39-7-1(28) showed once again how he is able to compete at the top level.

Makhmudov looked to be on his way to another early night, as he hurt Takam with pretty much his first punch before dropping the older man. But Takam go up and he let his own hands go to see out the lively round. Takam recovered from the knockdown and in round two he caught Makhmudov with a right hand upstairs. During this fight, the Canadian-based Russian was hit more often than in any of his previous 14 pro bouts combined.

Takam, who knows plenty of tricks, made things frustrating for Makhmudov and he also got home with some left hand shots. Makhmudov, knowing he was in his hardest fight yet, was more than willing to exchange blows with Takam and the fight was entertaining to watch. Takam was dropped for a second time in round 7, yet he again got back up and this time the bell came as he did so.

The final three rounds saw both men loading up, with the final round being an action session. Both guys earned their money last night, while the fans in attendance were given value for money. So what next for Makhmudov? There has been talk of a fight with a top contender, to come next year, and then maybe a title shot. But Takam, if he didn’t exactly ‘expose’ Makhmudov, did at least show him, and us, that there is work to be done in the gym; there are things Makhmudov needs to improve on. Still, the future remains bright for the 33 year old “Lion,” and fans will no doubt tune in to watch his next fight. Makhmudov doesn’t exactly have a lot of time on his side at age 33, yet he said after last night’s win that he was happy with his performance. Speaking with Sky Sports, Todd DuBoef of Top Rank said he feels Makhmudov “will really make some strides in the next 12 months.”

As for Takam, he showed once again that he is one of the toughest guys out there today. Takam will never become a world champion but the sport benefits so much from hardened operators like him. 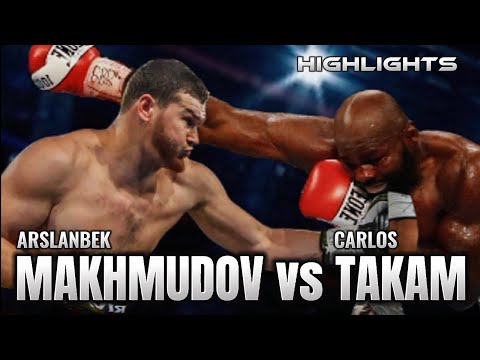