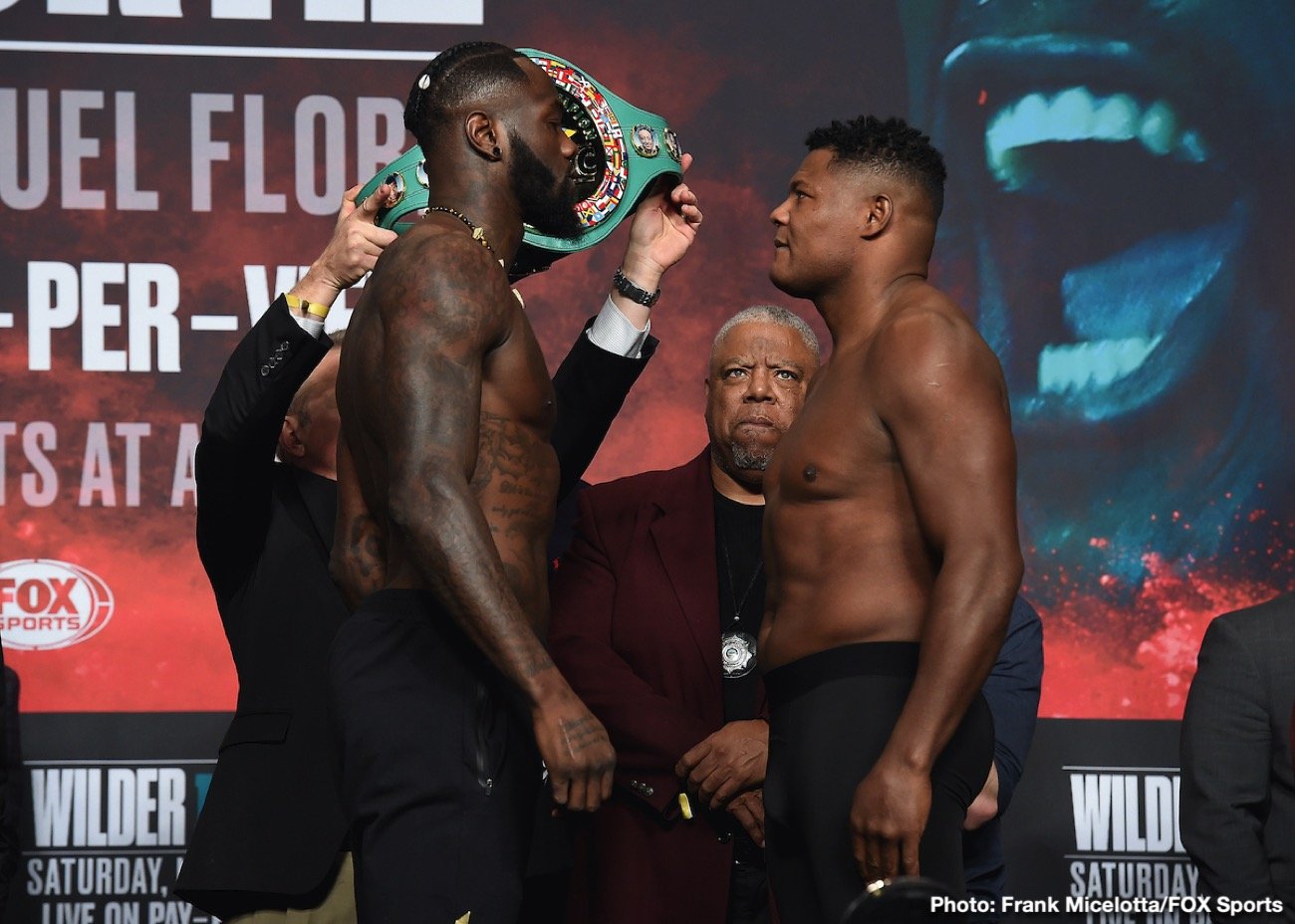 This Saturday night from the MGM Grand Garden Arena in Las Vegas, Nevada, Deontay Wilder makes a tenth defense of his WBC strap in a rematch with Luis Ortiz. Their first meeting in March 2018 was a fight of the year candidate and judging by the shape of Ortiz and the style matchup we just might be in for another intriguing outcome. The co-feature is a disappointing one with ‘Mr. I need a big fight’ Leo Santa Cruz in a stay busy outing versus Miguel Flores. Nery vs. Rodriguez looks to be competitive on paper and Figueroa vs. Ceja is a nice step up for an inexperienced Texas native that could turn into a war. The underbelly of this FOX PPV is not as solid as the last two events, but better than the Spence/Garcia undercard.

Over the last two years Deontay Wilder’s profile in America and across the pond in the United Kingdom has really taken off. Back in 2015, Wilder became the first United States fighter to claim a piece of the world championship crown at heavyweight in a long, long time. His all-purpose television packager (advisor) Al Haymon managed to keep Wilder busy with 3 more fights as he built to a mandatory challenger Alexander Povetkin scheduled to talk place in May of 2016.

Wilder set his sights to play the role of a real life Rocky having agreed to fight Povetkin in Russia as per purse bid agreement. Less than two weeks prior to the event, Povetkin popped on trace amount of meldonium prompting an investigation by the WBC thus canceling the bout. Injuries to Wilder’s hands and forearms forced the born and bred Alabamian to the sidelines after his fight with Chris Arreola.

Back to back opponents in 2017 also were caught cheating leaving Wilder to face a game Gerald Washington in February and a rerun of his title winning opponent Bermane Stiverne that November. Wilder made the absolute most of a seemingly no-win situation having to fight a guy that no one wanted him to face. Deontay’s first round explosion transported Stiverne into a meme that “Till This Day” is a popular share online.

Luis Ortiz’s blood pressure pills were supposedly the reason why he failed a VADA test meaning Wilder could get a big matchup he was craving. Ortiz got the better of Wilder in a slow starting few rounds. Deontay’s vicious right hand hurt ‘King Kong’ late in the 5th round. Luis would catch Wilder with several clean punches on the inside and had the ‘Bronze Bomber’ on the ropes in serious trouble. Wilder weathered the storm and proceeded to rain down on Ortiz in the 10th and final round finishing the show with a flush uppercut.

Between the Ortiz fight and a controversial draw to Tyson Fury, the popularity of Wilder and the heavyweight division in general has grown quite a bit. Once again Wilder made lemonade out of what some would call a lemon in Dominic Breazeale with a destructive 1-2 combo that sent shockwaves around the internet. Now, Wilder has two rematches lined up of course that’s if he can get by Luis Ortiz. If Wilder does stop Ortiz in a frightening manner his stock will continue to skyrocket in conjunction with Fox Sports pledging their full marketing power during the NFL seasons.

Most in the press believe this time around Wilder will improve on his performance while age is a key factor why Ortiz will be stopped earlier. Which seems realistic based off rematches historically, not to mention a KO ending to go along with father time. However, Luis Ortiz looks to be in the best shape of his life, regardless of Wilder’s claim of flu weakness in their first scrap.

This scribe is scratching his head wondering why Ortiz is looked at as such a mediocre dancing partner. After all if Wilder is so raw and unskilled why can’t he get out-boxed and hurt as we’ve seen numerous times before the right hand bails him out? Much lesser boxers in Szpilka, Washington, and Duhaupus have given Wilder fits on the inside and outside. The drama alone of the first outcome should at least count for something on paper. Even Breazeale was able to land a huge shot before getting stretched.

Similar to many of Wilder’s fights the pace will be measured as it will appear Ortiz will take the opening frames. Deontay will work at range with a jab as he winds up that ‘Turbine’ of a right hand. Will we finally see a consistent offensive display by Wilder in route of landing the eraser or will Wilder get caught up believing his own hype with talks of unveiling a thing he calls a ‘Super Punch’? This rematch will end earlier but feature a good chunk of give and take. This boxing podcaster won’t be shocked if Wilder gets hurt and rallies back again or gets stopped outright. On the record Wilder will at some point freeze Ortiz in his tracks and chop the Cuban down not long thereafter.

My Official Prediction is Deontay Wilder by 8th round knockout.