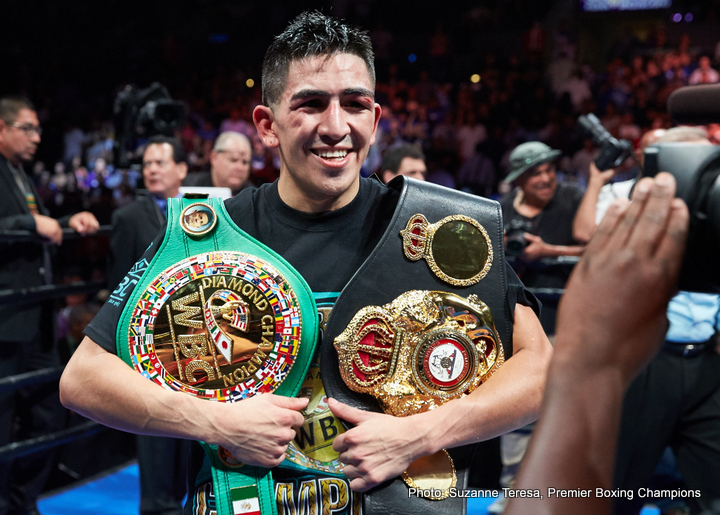 Leo Santa Cruz will climb through the ropes into the ring as he resumes his career this Saturday night on Fox. His opponent is a replacement named Rafael Rivera filling in for an injured Miguel Flores. Although a late filler, Rivera is a game fighter who will come to fight with victory on his mind rather than just a pay check opportunity. Regardless of the outcome this main event is served as an appetizer for things to come the rest of year for Santa Cruz. The co-feature Omar Figueroa vs. John Molina is a great style matchup perfect for the wide audience of Fox.

2019 has begun with a bang in a string of major upsets and competitive fights that looked easy to predict on paper. Will we get another shocker? Not likely but let’s hope this recent trend continues as we make are way to the heart of the boxing schedule.

Leo Santa Cruz has always been an exciting fighter to watch since he graced the television airwaves. It took some time for him to develop along the way, at one point holding belts without facing a real test. That all changed in August of the 2015 when Santa Cruz stepped up to the plate against Abner Mares.

Mares came out swinging for the fences, doing his best to bring his brand of physicality. Leo was clearly bothered by it as he looked to the referee for help. It didn’t take all that long for Santa Cruz to stand his ground and eventually take over the fight blending some brawling with technique and distance. The victory on ESPN put Leo on the map at the featherweight division.

Not long after Santa Cruz faced Carl Frampton in Brooklyn, New York at the Barclays Center. Frampton was ultra-sharp in their first meeting handing Santa Cruz’s first defeat of his professional career. Leo didn’t let that setback define him and in the rematch Leo and his trainer, this time healthy enough to be in the full training camp, made a few subtle changes and came out victorious.

2018 was a random year that saw Leo fight just one time in a second go around with Abner Mares. Now Leo has 126-pound unification on his mind and quite possibly a move up to the 130-pound division.

Standing in his way is a solid competitor in Rafael Rivera. At age 24, Rivera probably hasn’t reached his peak performance but this is boxing so one never knows if he will be matched properly to organically reach his full potential. Guys like Rivera are forced to take what’s offered, many times on short notice. It’s a tremendous ask of Rafael to pull off the upset this Saturday.

Last July, Rafael Rivera proved to be a tough out for unbeaten prospect Joet Gonzalez, losing by split-decision. In the fall of 2017, Rivera made a good account of himself taking previously undefeated boxer Joseph Diaz Jr. the full 12-round distance.

Leo is not a power puncher although he does have plenty of pop at 126. Santa Cruz is a volume puncher that can wreak havoc to the body. Not to mention Leo has a sharp jab when used. Look for this fight to get hot quickly as theses two Mexican warriors show their pride in the ring.

Depending upon how this fight plays out in the opening rounds, Leo may use his length with a long jab creating enough space to land hard shots that fluster Rivera. That said Santa Cruz and Rivera could engage in a war right from the jump.

My Official Prediction is Leo Santa Cruz by Unanimous Decision.

The co-feature will likely steal the weekend in a can’t-miss matchup between Omar Figueroa and John Molina. Once the ball gets rolling, buckle up because this will be an action-packed scrap. Due to inactivity, neither guy fought in 2018, there is a chance the first few rounds could be sloppy in spots.

Once these two guys warm-up all hell will break loose in the middle of the ring. Molina’s best bet would be to box a tad more on the outside in a similar fashion as he did versus Ruslan Provodnikov. Then again, Molina may want to bully Figueroa in effort to get inside those long arms and smother Omar’s punches. It doesn’t take rocket-science to know this one is a guaranteed banger, so may the best man win.

My Official Prediction is Omar Figueroa by Majority Decision

Side Note: Keep an eye on the Fox opening bout between Cesar Juarez and Ryosuke Iwasa along with the other undercard prelims on FS2.

Written by Chris Carlson Host/Producer of The Rope A Dope Radio Podcast Available at www.blogtalkradio.com /ropeadoperadio Follow on Twitter @RopeADopeRadio