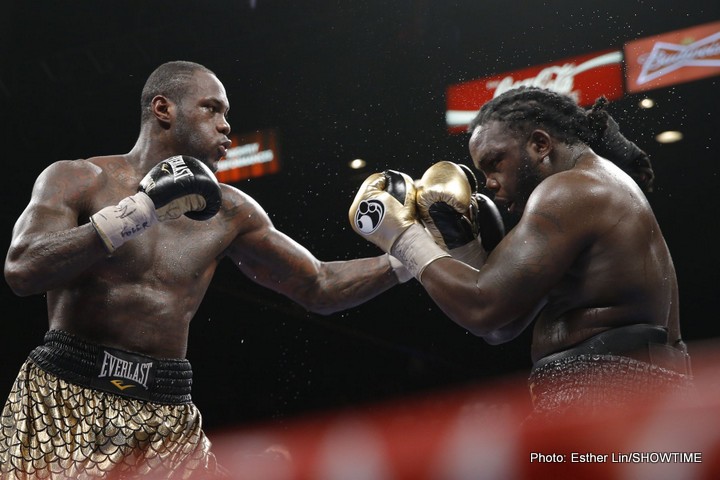 How often do you get to compare a professional in their seventh year to one in his second year? For myself it is not often but apparently that is normal for drawing comparsions between fellow olympians and current heavyweights Anthony Joshua and Deontay Wilder.

Both men are tall and strong and produce knockouts in high volume but that is really all you can tell so far. Anthony Joshua is still in the early stages of his career and has only just made it to double figures in total fights where as Deontay has now had 30+ bouts and his first world title. What is interesting is that other than the Stiverne fight they have been facing the same level of competition through 2014.

Who can say who is the better fighter when comparing Jason Gavern and Denis Bakhtov, or Nicolai Firtha and Konstantin Airich. Very similar in terms of the level of talent and the threat that they bring. Wilder really stepped up and proved his doubters wrong in his fight with Bermane Stiverne, but it could be a year or two before we see Joshua take that leap to the big stage and when this happens it will have been years earlier than Wilder if you compare total time as a pro.

Nevertheless fans get excited about this type of matchup and Wilder fans inparticular are very vocal about their man. They point to the Stiverne win and the world title as to indicators that their man would put a whipping on Joshua despite the fact that Wilder was fighting guys like Alvaro Morales (4-7-5 0KO) and Dan Sheehan (11-38-0 5KO) in the time that Joshua is now fighting legitimate top 50 heavyweights in guys like Michael Sprott and Denis Bakhtov. These are by no means world beaters but if Joshua continues on his climb through the ranks and the level of oppositon continues to improve at the rate he has he can make an impact on the world level within 3-4 years as a pro, unlike the 7 years it took Wilder.

This article is in no way meant to bash either man or belittle their accomplishments and a showdown somewhere along the line could well be on the cards but at this stage lets not expect the same results or even the same level of competition from two athletes at completely different stages of their respective careers.

Andy Ruiz and Teddy Atlas: Could They Work Together?518 Total Shares